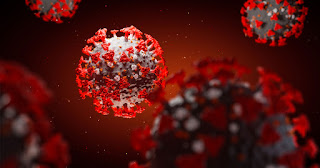 "While the human race battles itself, fighting over ever more crowded turf and scarcer resources, the advantage moves to the microbes' court.  They are our predators and they will be victorious if we -  Homo Sapiens - do not learn how to live in a rational global village that affords the microbes few opportunities."-  Laurie Garrett, 'The Coming Plague', p. 620.

The litany of news media takes now on the revived "lab leak theory" of Covid 19 origins is breathtaking. Where once sanity and a degree of reason and real science reigned, they now have been replaced by the steady drumbeat of propaganda to find a virus scapegoat.  As in the lab virologists and their research in Wuhan, China.  All of those who've now jumped on this bandwagon - including the usual Reich wing suspects, e.g. WSJ editors ('The Virus Lab Theory's New Credibility',  May 27, p. A20) and WSJ resident troll Holman Jenkins Jr. ('Wuhan Lab Theory Is A Media Warning',  May 29-20, p. A15), are no closer to the truth and in fact merely spouting more balderdash.  What these nattering nabobs need to do is read Laurie Garrett's sobering take on microbes in 'The Coming Plague'.

One of her themes is also one I've persistently pounded in blog posts, i.e. that dimwit humans encroaching on wild natural habitats - carelessly cutting down rainforests and expanding industrial activities  - is a recipe for disaster. In these assorted habitats where reckless humans dare to venture, ravage nature and build outward,  the predatory microbes await.  They are adapting, changing, evolving and their success is at the cost of human welfare.  As Ms. Garrett observes (p. 618):

"An individual microbe's world is limited only by the organism's mobility and its ability to tolerate various ranges of temperature, sunlight, oxygen, acidity or alkalinity.  Wherever there may be an ideal soup for a microbe, it will eagerly take hold,  immediately joining to the local microbial ecosystem of  pushing and shoving struggle for survival....

In this fluid complexity human beings stomp about with swagger, elbowing their way without concern into one ecosphere after another. The human race seems equally complacent about blazing a path through a rainforest with bulldozers and arson  - or using an antibiotic 'scorched earth' policy to chase unwanted microbes across the duodenum. "

Going on to note that such invasions will increase as human numbers increase even more - with now over 7.5 billion.  Which is where the ever reckless pushing has finally met up with the ultimate microbe reservoir in the bat.  As so eloquently put by Matt Ridley ('The Bats Behind The Pandemic', WSJ, April 11-12, 2020, p. C5):

"Bats have supplied most of the dangerous new diseases of the past two decades including: rabies, Ebola, Marburg and other highly dangerous viruses...even the "tasty" fruit bats carry the Hendra and Nipah viruses - and have been responsible for "small but lethal outbreaks in South Asia and Australia.
One quarter of all mammal species are bats - and they have lots of different viruses. They also fly so can carry diseases long distances."

Meaning the most likely source of origin is the Covid -19 virus infecting one or more horseshoe bats then the bats making their way to the wet markets in Wuhan.  There a careless tender likely became infected on contact, and spread the newly emergent virus to co-workers. Or perhaps even to one of those Wuhan Lab workers, waiting for some delicacy or other.  It is quite possible, even probable,  more so than a lab accident releasing the virus.

"This pathway remains the least likely of all for the origin of Covid 19.  On the other hand, there is a great deal of evidence that these viruses originate in wildlife, and have previously and repeatedly infected people who are highly exposed to these animals, work in the wildlife trade. So it's pretty simple and straightforward,".

Which is exactly the point reinforced in the penultimate chapter ('Nature and Homo Sapiens') of Laurie Garrett's book.   We also recall here the hypothesis of one Australian virologist,  related to Richard Engel in his first MSNBC special on Covid-19.  To wit, she opined that virus-laden bat guano contaminated a hog pen and got on a butcher's hands. He then indiscriminately wiped them onto another surface where the microbes were picked up by an unsuspecting third party who then touched nose, mouth or eyes.  This is a far simpler hypothesis (by Ockham's Razor) then supposing the virus "escaped" a research lab which adopts multiple, redundant safeguards.

But the virus getting into the bloodstream and wreaking the havoc we've seen just from casual contact? Yes, given as Laurie Garrett points out:  "less than 0.64 micron, or just one-hundred thousandth of an inch, separates the air environment in the lungs from the human bloodstream". Hence, a wet market worker just inhaling virus-laden bat guano - say that got on a Pangolin - could soon have full blown Covid -19.  Especially given this virus has special proteins capable of locking onto human epithelial cells. (A significant fraction of early coronavirus infections were also linked to a sprawling Wuhan market where, according to the WHO report, traces of SARS-CoV-2 were found in drains and other surfaces near animal stalls.)

So why is the Right media and press so maniacally pushing the lab theory of origin?  Well, because it conveniently shifts blame for the Covid-19  tragedy to China and specifically its virology lab in Wuhan.  Hence, provides backhand justification for Trump's endless parroting of the "Wuhan virus"   or "China virus".  Reckless rhetoric that has arguably led to the horrific attacks on Asian Americans in this country.

Meanwhile, the WSJ editorial (ibid.) made a big deal out of "the dominant narrative (or origin)  running into a problem" i.e. "No one has ever discovered a natural origin for Covid -19."   But this isn't surprising given that Laurie Garrett in her penultimate chapter cites a number of cases - including Ebola- for which the specific natural pathway  or source was never found.  But that doesn't mean scientists believe it  was created in a lab, or escaped a lab.  In addition, Garrett cites examples of infections in primate research labs for which the exact source was never identified, e.g. p. 574:

"During the early 1970s, 126 American primate research facility employees were accidentally infected with monkey microbes.  The precise etiology of most of their ailments was never determined.."

Could the same apply to the Covid -19 origin? Indeed, could a natural origin apply to a Wuhan lab worker? Say contracting it in a wet market and bringing the virus into the lab? Yes, of course. Given the number of animals in the Wuhan wet markets - all kept in close quarters -  there would be abundant opportunity for the virus to jump from species to species. Including to unwary humans. Secondary infection- contamination also must be considered, i.e. a Wuhan researcher need not have actually gone to a wet market but only come into accidental contact with an infected wet market worker.

Let's also keep in mind  that even if the SARS- CoV-2 virus jumped from bats to humans outside of a lab it would be difficult to find airtight proof for that pathway.  After all,  when an animal like a Pangolin dies, they take their viruses with them.

The main takeaway from this post, apart from the suspect basis of the lab theory, is that we are not out of the woods yet with Covid -19.   Millions may be taking to the skies and 135,000 were at the Indianapolis Speedway, with millions more cramming beaches  but the virus and its variants are still out there.  And in the U.S. the millions (some estimate up to 35 million) who still haven't been vaccinated represent a potential reservoir for further virus infection, mutation and spread. Indeed, a new mutation combining the UK and Indian variants is now raging in Vietnam.

Are unvaccinated Americans aware? Do they even care?   Until herd immunity is reached globally no one ought to fancy this pandemic is over, not by a longshot. This is especially given the B.1.617.2 variant, now dubbed the Delta variant, is in at least 60 countries, including the U.S. and the U.K., and British scientists recently estimated that it might be 40% to 50% more transmissible than the B.1.1.7 variant, or Alpha, which in turn is more transmissible than the original virus and quickly spread across the globe. Against this threat how can anyone be stupid enough to be "vaccine hesitant".  (Assuming no other health issues.)

Meanwhile,  recent new guidance from the CDC allows those fully vaccinated to leave masks at home, and confers an "honor system" on the "vaccine hesitant" (sic) to wear those masks.  But will they, given most are  Reepos?  As local (Indy) columnist Mike Littwin put it: "The honor system?  In America?  The same country that saw 70 million plus vote for the lyingest president in history?"   He has a point, and why for this lot it is more likely to be a "get out of mask jail  free card".    Also, why letting the national guard down may be a huge invite to the virus - or some variant - to revive its onslaught.

We may cite the words here of a virologist in Laurie Garrett's book:

"We are in an eternal competition.  We have beaten out virtually every other species to the point where we may now talk about protecting our former predators.  But we are not alone at the top of the food chain.  The microbe predators are watching and waiting for the chance to pounce."

In the end, our own reckless and entitled behavior such as neglecting to get vaccinated to reach herd immunity  -  or going maskless when we haven't been vaccinated -   may well be the end of us.  If not from Covid-19 then an even more virulent and infectious pathogen just around the corner.  The next "coming plague".  (See Garrett's discussion of a simulation based on airborne Ebola.)

No sign of virus escape from Chinese lab that studied pathogens