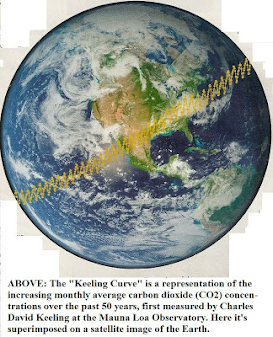 With the West in the midst of  a "mega drought" - already affecting some 293,000 square miles - climate change has again come to the fore.  Indeed, let's say it has once again ramped up, this after a year in which the world emitted 5.8 percent less carbon dioxide in 2020 than it did in 2019.  This according to the International Energy Agency, noting it marked the largest one-year drop ever recorded.

Well, it had to end some time, especially as the Covid  lockdowns ended and traffic, industrial activity resumed.   We knew it couldn't last.

The process may be described something like a series with terms being added, viz: to describe the CO2 content now in the atmosphere, we must initiate the series with n= 1 (for 1920), viz.

E.g. terminating at the last term 100 years later. Here each ‘x’ denotes the CO2 burden added for each year in succession.

Thus, the CO2 effect for a given year is not just for that year, but rather inclusive of the cumulative additions for all the years - starting up to 100 years before!

This means things can only get worse, and no amount of carbon credits pricing or trading will save the day.  Even more sobering, we've yet to experience the full effects of the CO2 we've already emitted - mostly because it takes the oceans a long time to warm in response to a given level of CO2 -  and the oceans are the primary buffer mitigating the worst greenhouse warming effects right now.  Once the oceans reach their CO2 absorption capacity, the spillover effects  into the atmosphere will be severe.  Look for a sudden 4-6C increase in mean global temperature.

Scientific instruments atop the Mauna Loa volcano in Hawaii now reveal that levels of carbon dioxide in the air averaged 419 parts per million in May, the annual peak, according to two separate analyses from the Scripps Institution of Oceanography and the National Oceanic and Atmospheric Administration.

Those readings are about half a percent higher than the previous high of 417 parts per million, set in May last year.  Climate researchers have estimated that there hasn’t been this much of it in the atmosphere for millions of years.

Last month, the International Energy Agency issued a detailed road map for how all of the world’s nations could reach net zero emissions by 2050. The changes would be drastic, the agency found: Countries would have to stop building new coal plants immediately, ban the sale of gasoline-powered vehicles by 2035 and install wind turbines and solar panels at an unprecedented rate.

If nations managed to hit that goal, they could limit total global warming to around 1.5 degrees Celsius, compared with preindustrial levels. (The Earth has already warmed more than 1 degree Celsius since preindustrial times.) Doing so could help humanity avoid some of the worst impacts of climate change, such as the irreversible collapse of polar ice sheets or widespread crop failures.

But so far, the agency warned, the world is not on track to hit that goal. Total annual emissions are currently expected to rise at their second-fastest pace ever this year as countries recover from the pandemic and global coal burning approaches its all-time high, led by a surge of industrial activity in Asia.

The amount of carbon dioxide in the atmosphere currently varies by about 10 parts per million over the course of a year. It reaches a peak each May, before the seasonal growth of vegetation in the Northern Hemisphere, which has about two-thirds of the Earth’s land mass, removes some of the gas through photosynthesis.

The May average first topped 400 parts per million in 2014 — a milestone that attracted worldwide media coverage. Since then, emissions have continued to soar. The latest full-year average, for 2019, was 409.8 parts per million, about 46 percent higher than the preindustrial average of 280.

We know the CO2 concentration in the atmosphere accelerated from 400 ppm in 2013 to 415 ppm recorded in 2019. That is an approximately 6 year interval for a per year change in concentration of :

This was 25 % higher than the previous average rate of increase, i.e. 2.0 ppm/ yr. Given we know that every increase in CO2 concentration by 2 ppm increases the radiative heating effect by 2 W/ m2,  we also know that the associated radiative heating is now significantly higher.  The rate of increase the past 2 years has been even more dramatic, e.g.

This jump can likely explain the mega drought in the West now as well as the sizzling temperatures in much of the nation.  In the words of one ABC meteorologist, Rob Marciano,  last night: "This is climate change's punch in the face."  Indeed.  While it is true that  there is a yearly rise and fall   in CO2 concentration and May is usually the peak month for atmospheric CO2, we have also seen each yearly peak is inexorably higher than the last one.  This behavior has been noted for decades and hearkens back to the well -known Keeling curve.  (See graphic)

The current levels of atmospheric CO2 are likely comparable to those seen during the Pliocene era, 4.1 million to 4.5 million years ago, according to the Scripps researchers. While that period is not a perfect guide to what would happen today, it can provide some clues. By analyzing ice cores and ocean sediments, researchers have determined that temperatures during that time were nearly 4 degrees Celsius (7 degrees Fahrenheit) higher than in the modern preindustrial era and that sea levels were about 78 feet higher than today.

The takeaway is ominous and points to the approach to a new system instability - or new "global minimum" for climate - first articulated by Prof. Gunther Weller of the Geophysical Institute. Prof. Weller invoked the "cusp catastrophe" and how even a minute change in a control parameter (say CO2 concentration) can alter a state.   Let the latter then be governed by a potential V(x,c) with c the control parameter and described by a point x Î  R n    that minimizes the potential. Changing external conditions - say pumping out more CO2 into the atmosphere  - changes the values of the control parameter c and that in turn changes the shape of the potential V(x,c).

As the shape of the potential V(x,c) changes the original global minimum becomes metastable or even disappears.   I believe we are at such a metastable point now with the concentration having jumped by 4.6 ppm/ yr. in just 2 years.   The danger then is the global climate system being knocked into instability and assuming a new global minimum leading to a planet with even more hostile conditions.  (In this case like the Pliocene era.)  If I am correct this summer ought to see blistering heat waves, monster storms, and intense (Cat 4,5)  hurricanes.

On an ending note of good news, Canada’s TC Energy Corp. TRP 0.59% and the Alberta provincial government said Wednesday they would scuttle the Keystone XL oil pipeline project, bringing to an end a yearslong controversy over an effort to pipe more Canadian crude to the U.S.  The decision had been expected after President Biden used his first day in office to revoke a key permit for the pipeline to cross the country’s northern border, shutting down construction.

Posted by Copernicus at 6:41 AM