The "Persistence of Astrology"- Arising From Fear, Insecurity Or Blindness To Bunkum? 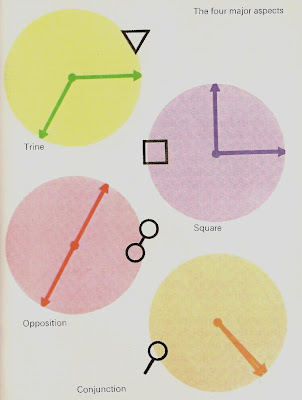 The geometrical aspects for the planets defined. (From 'Astrology' by Hugh Arthur, 1979)


In his  recent editorial ('The Persistence of Astrology') in Physics Today,  Charles Day bemoans how the pseudoscience of astrology has persisted through countless decades. This despite its obvious, palpable and loopy means of "divining information about human affairs and terrestrial events" - quoting a Wikipedia piece.  Day then writes:

"It is absurd to assert, as astrologers do, that the planets influence human character and that these influences are stamped on us at the moment of our birth. Isaac Newton was born prematurely on 4 January,  1643. If his mother had carried him to full term, the Sun would have been in Aquarius , not Capricorn, when he emerged from her womb."


He then goes on to cite former Miami Dolphin RB Ricky Williams who's become a firm devotee of astrology, noting:

"Williams's love of astrology is evidently sincere. He finds studying and interpreting the movements of celestial objects to be a source of order, comfort and enlightenment."


Well, then why not go all in, and pursue celestial mechanics, for example?  Well, because the mathematics is yet a whole other order beyond what's used in horological astrology, so a goofball like Williams would not be too interested. It would be beyond his mathematical - or analytical - ability.

But this begs the question of why supposedly sober journalists (Day cites USA Today reporter Josh Peter), make so much ado over Williams's fascination with twaddle.  As Mr. Day writes:

"Peter's USA Today story is devoid of skepticism about astrology. Given how assiduously journalists challenge the claims of politicians, government officials and CEOs, their timidity in the face of astrology's adherents is striking."

Well, to be fair, it might be best not to conflate an entertainment reporter like Josh Peter - clearly operating in journalism's "softball" domain - with a serious political journalist like Nick Confessore,  the NY Times politics correspondent.  Or with  former former Washington Post reporter Carl Bernstein (who helped break open Watergate.).  Hence, it is most likely true that Peter is paid a whole wage scale lower than Confessore to do basically 'ooh and ah' puffball pieces, like Ricky Williams's fascination with astrology..

More distressing is Prof. Day's  citation of the prevalence of this malarkey in women's magazines, i.e.:

"Lastly, there's the troubling prevalence of horoscopes in women's magazines. In a June post to Examplore, "a site created by spiritual, magical and lore enthusiasts" astrologer Silvia Sky reviewed the horoscopes in newsstand magazines. The best, she wrote, appear in Elle, Cosmopolitan, Marie Claire, Seventeen and Town & Country."

"That horoscopes survive in women's magazines is evidence that the magazines' editors know that their readers appreciate them."


The question is 'Why?' and is it a gender thing, a class thing or perhaps some other aspect at work? If women's magazines in the U.S. are a huge repository of astrological rubbish, I suspect that is due to wanting to fill content with lighter fare that is not necessarily to be taken seriously.  With the torrent of bad news about incessant sexual assaults, the Trump Cabal and its multiple attacks on the nation's fabric, not to mention Republicans' assaults on women's reputations, it makes sense.  Women -  via horoscopes appearing in magazines  -  can get a bit of escapist fare and it kind of serves a therapeutic purpose.  But let's be clear the interest in astrology is not confined to the gentler sex.

I explored many of the reasons in an article 'Astrology And Astronomy' that I wrote for The Barbados Nation back in March, 1976,  (never mind the editor misspelled my surname) e.g.

I noted the same prevalence in (then) current magazines on offer, though not necessarily concentrated in "women's magazines."  My point was that the prevalence of astrology coincided with being "in extremely troubled times" adding:  "Into this bleak picture comes astrology with its pat answers and pseudo-scientific jargon (e.g. cusps, ascendant) which make it just believable enough for many people."

I also emphasized the theme of tumultuous times playing a huge role in fueling fear, insecurity and a search for meaning. That theme is with us today too, maybe even more powerfully than in 1976.  We now are on the cusp of a mega-climate apocalypse, countless school and mass shootings, not to mention three times the nuclear weapons  - or ample nukes to incinerate the planet ten times over instead of three.  We also have a pussy grabber, criminal and traitor fouling the White House - who even now is vowing to shut down the government over a delusional border wall.  We also have a majority party that,  as political commentator John Heilemann put it two nights ago, is now in the throes of "moral, intellectual and ideological bankruptcy" especially after refusing to do a thing to check the renegade in whom they've invested everything. To the extent of  even making excuses for him, and cooperating with a network (FOX News) that runs in a parallel thought universe.  Therein it conjures up whole cloth rubbish (Clinton Foundation and Uranium One conspiracies) to spread to its zombie viewers who suck it all up like so many millions suck up astrology horoscopes.

So it is hardly a surprise insecurities and fears are heightened, not only among women but men as well.  Indeed, the larger point made in my original article 42 years ago was that too many gravitated toward horological astrology out of intense insecurity as well as a feeling of lack of control.  Given that both appeared to be intertwined, i.e. lack of control fueling more uncertainty and insecurity, it made sense millions would seek a system which at least provides the facade of control of their lives. In this way people - if very vulnerable - could become "blind to bunkum."

That was the primary conclusion I drew from my own observations, and it seems as good a basis now to invoke for the "persistence" of astrology.  In effect, knowing certain aspects of the astrologers' heavens enables the believer to allay her fears and delude herself into gaining more control of her life, simply by knowing how the stars (and planets) foretell fortunes or setbacks.   This was especially as "traditional religion afforded few answers and little solace."

The fly in the ointment, as I first pointed out, is that the horological signs are fictions based on subjective perceptions instead of physical reality. Hence, trying to extract "control" from them is akin to trying to build a bungalow on quicksand.   Specifically, the alleged "signs" based on visible constellations, didn't really exist. They were mere random collections of stars, often at widely differing distances, into which human perception read a pattern forming one coherent whole. (When humans look up at a starry night sky it is impossible to discern which stars are nearer, which farther - especially as brightness is no kind of guide.)

Thus, horological astrology reduced to a subjective template that actual astronomical observations and data didn't support.  To fix ideas, the Vernal Equinox is called the "first point of Aries" by astrologers, since it was originally in that sign two thousand years ago. The problem is that this celestial reference point is no longer located in Aries, but in the adjacent constellation/sign: Pisces! In the two thousand years since the Sun signs were devised, the Earth's axis has undergone precession out of the original alignment, and with it the equinoxes! This means that each of the other eleven so-called Sun signs used in horoscopes is out by the same amount: one entire Sun sign. For consistency, all present day birthdays would need to be re-calibrated to the preceding sign. So if your birthday is July 4th, say, you are no longer a Cancer but a Gemini! If it is October 18th, you are no longer a Libra, but the sign just before, Virgo. And so on.

Incredibly, many of the astrologers I've encountered over the years are rather blase about all this.  They usually say something to the effect that the "real" (original twelve signs) are "forever fixed" as they were two thousand years ago. They insist that my preoccupation with "signs being out of step"  is not a matter of genuine signs at all, but the constellations (star patterns) associated with them! In their incredible view, the zodiacal constellations are shifted by the Earth's precession but not the "fundamental" signs! These signs will remain firmly anchored in the sky, immune to all Earth's motions, forever and ever!


As one can see,  all of this leads down a never ending subjective rabbit hole wherein the astrologer gets to define his -her celestial reality devoid of actual astronomical inputs. It all becomes a matter of "cartoon" images and perceptions reigning over science.  An example of what I refer to as "cartoons" includes the so-called planetary aspects used to craft personal horoscopes (see top image).

Here certain geometric relations and alignments are deemed to be interpreted in terms of the planetary aspects. For example, in the conjunction two planets -  say Venus and Jupiter - essentially "line up" so the planets' "principles"  combine to reinforce each other.

This bears some superficial similarity to the astronomer's computations of planetary configurations, e.g.
http://brane-space.blogspot.com/2011/08/tackling-intermediate-astronomy_17.htmlBut, the astronomer does not impute any personal or character traits to these configurations whatsoever. The astronomer is interested in them purely for the objective purposes of future (or current) observations, say in calculating when a future occultation (i.e. of star and planet) or other astronomical event will be visible. Say the most favorable opposition of the planet Mars, for optimal telescopic viewing, e.g.

By contrast, the astrologer will become animated when any two planets, say Mars and Venus, appear in a "square" aspect. He may then conclude the  emission of a discordant influence which results "in frustration, imbalance and inner conflict."  In other words, the planetary aspects determine the outcome of one's  personality or dynamic for personal interactions on a given day,  or whatever.

Frankly, it is as if astrologers inhabit a parallel universe of their own creation, almost like the pro-Trump, WSJ op- ed  Foxites who have invented their own Hillary - Jim Comey- Christopher Steele conspiracy theories targeting Trump - to counter Mueller's own findings.

So perhaps it isn't so much a matter of persistence of just astrology per se, but the persistence of magical  and  pseudo conspiratorial thinking throughout the country - even in the illustrious Wall Street Journal.  Recall its op -ed pages continue to spin the Hillary- FBI- DOJ- Steele dossier as a viable alternative construct to the Trump-Russia conspiracy investigation pursued by Robert Mueller, e.g.

What we do know from history is that such bifurcations in reality perception never end well for a country. We can only hope that our nation soon gets its collective perceptions in order (by which I mean achieving an agreement on what constitutes reality)  before the proverbial shit hits the fan.
Posted by Copernicus at 8:17 AM