Question: Can you please explain the H-R diagram and how it's used?  - Marie E.,  Brattleboro, VT

Answer:     For reference, examples of two H-R diagrams are shown below: 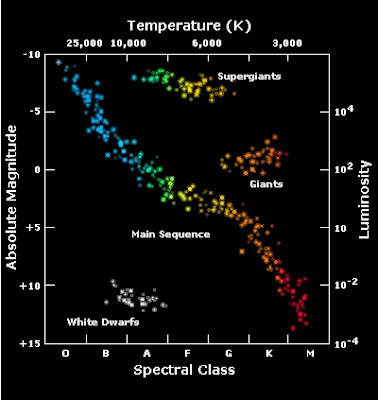 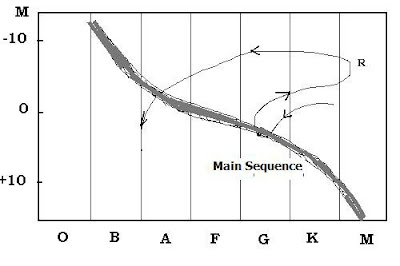 Fig. 2: H-R Diagram showing the evolutionary track for our Sun. The 'dot' at spectral class G2 indicates its current position on the Main Sequence - the domain for stable stars.

As you can see, the H-R diagram, for Hertzsprung-Russell diagram (after the two astronomers that first devised it), is a graphic tool we use to assess the comparative properties of stars, i.e in terms of temperature, brightness. It is also used to study stellar evolution, or how a star evolves over time (in the case of Fig. 2).

A basic H-R diagram is shown in Fig. 1.  There are two “quality dimensions”, displayed on the vertical axis and on the horizontal. In this case, the “Absolute magnitude” value on the vertical represents a measure of absolute brightness ( denoted M, and doubles as an index for what we call Luminosity (right scale). In terms of absolute magnitude the lower the value, the greater the brightness. The scale is also logarithmic, so that a star of (-10) say will always be 100 times brighter than a star of (-5). So five magnitudes difference in M corresponds to 100 times brightness ratio. Thus, every single magnitude arithmetic difference will be a ratio of 2.512 times.

The other quality dimension is the horizontal axis which is labeled in capital letters associated with the spectral class. In terms of this lettering, class O stars are always the hottest, and class M the coolest. Thus, we can double the spectral class as a temperature scale (top of diagram). Within this representation framework all the key domains - star colors, star ages, star distances, star energy use, can be integrated and depicted in their relations if one can interpret the quality axes properly and use them in specific ways.

How does distance enter? Well, the absolute magnitude is defined in terms of the brightness –magnitude a given star has at a distance of 10 parsecs, or 32.6 light years. Thus, the M-value allows comparison of stellar brightness at a standard distance.

Stellar ages enter via the star’s evolutionary track (sketched in Fig. 2 for the Sun, as a wavy thin line) and depicts the nature of its departure from a band called “the Main Sequence” – with the latter being the superposed domain for all stable stars.  By stable we mean the outer gas or radiation pressure is balanced by the inward directed gravitational force, which we write mathematically as:

When only ten percent hydrogen remains (X= 0.10, Y = 0.87, Z = 0.03 for heavier element fractional abundances, say), the Sun is no longer able to generate sufficient energy from its core nuclear reactions to balance the weight of overlying layers. According to a well-known physical principle (the virial theorem), the Sun’s core must contract. The contraction converts gravitational potential energy into thermal (heat) energy that heats the core. By now, hydrogen burning has moved to a peripheral shell around the core, and is ignited by the core heating process. The ignition creates radiation pressure that forces the outer shells, layers to expand. This same radiation, however, is now emitted from a much larger surface area. The result of this combination of circumstances is that the Sun becomes a Red Giant.  Finally, when all the nuclear fuel is exhausted, e.g. X= Y =0, the outer gaseous envelope is expelled and the remnant Sun contracts to the white dwarf stage.  This renders it with a mass nearly equal to the original Sun but with volume now roughly that of Earth.

In effect, this form of H-R diagram enables us to input relative abundances of key elements, say X for hydrogen, Y for helium, and  even Z for heavier, and see how these alter the evolutionary path at ny given time.  The more general H-R diagram enables us to compare the differing properties of stars - especially on the Main Sequence. These include the luminosity, mass and even radius.  In the case of a star much more massive than the Sun (say more than ten times the solar mass), pre-Main Sequence collapse also occurs within an interstellar gas and dust cloud, but the Main Sequence is joined at a higher position, corresponding to greater luminosity. Astronomers have determined a basic empirical relation for mass and luminosity to be the "mass-luminosity relation", i.e.:

where L, M refer to solar luminosity and mass  values and L', M' to stellar values.

That is, the luminosity is proportional to the mass raised to the 3.5 power. What this also means is that the massive star initiates its Main Sequence lifetime at higher temperatures, including higher core temperatures. And like a fast-living human, its energy is consumed much more rapidly, so the course and duration of evolution is dramatically speeded up.   These insights and data derived from more complex mass and radiation parameters, also enable us to predict the fusion reactions which apply for a star of given mass.

As you can see, the H-R diagram is of immense value in studying stellar properties as well as stellar evolution in extraordinary detail.  This makes it an indispensable tool for theoretical astrophysics, as well as solar physics.