Selected Questions- Answers From All Experts Astronomy Forum (Estimating No. of Stars In An 8000 Light Year 'Bubble' Around Earth) 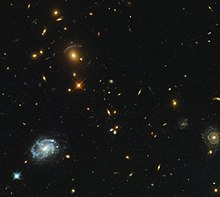 Question: How many stars would be in an 8000 light year ''bubble'' around Earth? And how many habitable planets would said area have?

Answer:  First, let's change the units to parsecs instead of light years. Currently, the stellar density near the galactic center is estimated at 100 per cubic parsec - so that in the Earth's vicinity two-thirds of the way out to the galactic edge it is  much more sparse,  like 0.5 per cubic parsec.


We use this to get the  total volume of interest:


If there are 0.5 stars on average per cubic parsec then the stellar density is:

The next question (how many habitable worlds?)  is much more difficult because the data is extremely sketchy.  Assuming a habitable planet requires an early spectral type G star (the Sun is G2) then perhaps only 1 out of 100 stars fit that bill. "Habitable" means within the so-called "Goldilocks" zone - i.e. within a suitable temperature sphere about the star.

So far only about 1 in 100 fit that distribution according to a sampling of the Kepler space telescope exoplanet findings.

So, given these limiting parameters (fractions), the estimated (again 'ball park') number of habitable planets in that volume (not "area")  would be: roughly    40,000

One must take care, however, to distinguish "habitable" from actually inhabited. The latter, may be one thousand times less - again, or only 40.   In the words of Guillermo Torres, an astronomers at the Harvard-Smithsonian Center for Astrophysics:

"These planets do exist. We didn't know that before. What we're really looking for eventually is signs of life. We're not there yet. It will take many years."

Indeed! Which begs the question: 'Can any kind of life on these exo-planets really be determined from a distance?'  I don't believe so.  I suspect it would take actually going there and doing a=careful bio-chemical investigations such as we've done on Mars.  So the most we can do for now is speculate that this or that planet may be life supporting, or potentially "habitable".