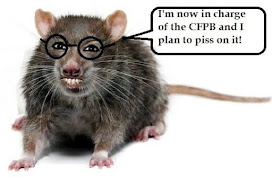 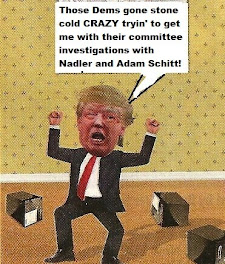 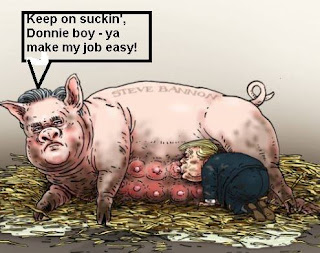 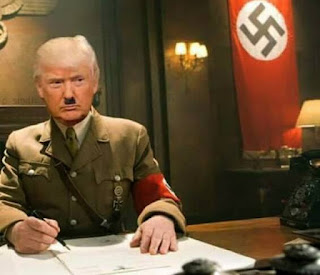 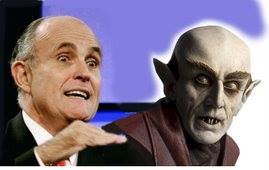 Polemic(def.):   Writing that features contentious rhetoric that is intended to support a specific position by aggressive depiction and undermining of the opposition.

As the Trump-Reich wing driven government shutdown enters its 2nd week, there is more than ever the need to skewer these wretched maggots even as one more and more sees and hears the idiocy "both sides are to blame". Uh no, they are not! Only one side merits blame: Trump who actually wanted this fiasco, and the Right wing media axis that egged him on to go through with it (see previous post).  That said, this more than ever reinforces the need to attack the other side using polemics.

On occasion I've been asked, especially by wifey (and friends), why so many of my political posts lean toward polemics, say as opposed to an "objective" discussion of opponents' policies.  I always reply the same way:  Their own Right wing media system refuses to do that, so why should I help prop up that benighted system by kowtowing to a fake objectivity?  In other words, these fools need tearing down, not validation. If the Reich media tilts perceptions then perhaps polemical posts can help in some small way  to counter the effect their grubby fingers have on the perceptual scales.

According to Eric Alterman, a media specialist writing in a recent issue of the Nation: ('Asymmetric Warfare: Far Right Media Isn't Playing By The Same Rules', Dec. 31, p. 6)  there exists a vast media "asymmetry" between how the supposed mainstream (and even many bloggers) portray the news and how the Right's media mavens do it. Specifically,  the primary consequence of this media asymmetry is a propaganda feedback loop. This loop, once established – as it is via FOX, Limbaugh, Breitbart etc. -   “lowers the costs of lying and increases the costs of resisting in the name of truth”.

In other words, it requires vastly more energy, and time -consuming investigation, as well as  endless scrutiny to knock down all the lies spewed out daily and metastasizing like so many mind viruses in the media ecosphere.   Now, since we already KNOW that 99.9 percent of what the Right media generates amounts to lies, then it make more sense simply to attack  all of their production as propaganda.  Also, take down their  screeching sock puppets (e.g. Rush Limbaugh, Ann Coulter, Steve Bannon, Laura Ingraham et cl) as liars and manipulators from the get go.  No need for "scrutiny" because their past misdeeds and overstretch, like Steve Bannon's and Dotard's, precede them,. So why not just go straight for the jugular to skewer the emitted propaganda, using hard hitting criticism as well as imagery (see above graphics) from the outset?

To make his case, Alterman  cites the book 'Network Propaganda: Manipulation, Disinformation, And Radicalization In American Politics’ (by Yokai Benkler, Robert Faris and Hal Roberts of Harvard University) and I’d say there isn't  a more profound take concerning how the American media consumer is being bamboozled with propaganda.  This is in reference to an asymmetric media environment wherein the Right’s crazies hold all the advantages and the regular media competes with one "hand" tied behind it.   Contrary to the usual malarkey  - which the mainstream media itself often recycles- the 3 authors found (op. cit.):

“No Left Right division, but rather a division between the Right and the rest of the media ecosystem. The Right wing of the media ecosystem behaves precisely as the echo chamber models predict, exhibiting: high insularity, susceptibility to information cascades, rumor, conspiracy theory and drift toward more extreme versions of itself.”

"Even core right wing sites that do claim to follow journalistic norms, Fox News and The Daily Caller, do not in fact do so."

In other words, they abide by no known rules of  journalism, despite now accounting for an ever increasing share of political news sources and consumers.  An example, as Alterman writes, "During the 2016 election, the racist, inflammatory Breitbart was the third most frequently shared news source on Facebook, after The New York Times and CNN."

Of course, that stat is pathetic and discloses way too many Americans  unable to distinguish propaganda from real news.

Now, do my blog posts deliver real news? Yes, to the extent I cross check whatever comes over my transom (email alerts), whether from the New York Times. WSJ, Daily Kos, Financial Times or other sources.  If cross checking reveals major discrepancies then that item is not included or referenced. Hence, real news not alternative facts, is delivered but I do not refrain from taking a definite viewpoint on that news.  Or indeed, on any cited editorials, whether from The WSJ (on Trump and his behavior) or from The Denver Post, say on fracking or recent midterm voting amendments.

And always I am on the lookout to skewer (with appropriate imagery or cartoons)  anything that looks remotely hinky, sketchy or outrageous.  Am I justified in this "loaded" approach?  Damned straight!  As Alterman himself notes: The most important contribution of 'Network Propaganda'  has been to reveal that the mainstream media "have made themselves complicit in this system".

That is, quoting from the book, "when one side systematically produces propaganda and has no internal checks then the insistence on maintaining neutrality creates a fiction that  there are two legitimate sides to this story".

My approach, in my political blog posts, is to call the other side out as liars and manipulators from the get go, no 'two sides' bunkum.  Hence,  I am not going to even pretend a hint of "objectivity" - which has merely been used by the corporate (often hedge-fund owned) media, to avoid doing their due diligence.

The upshot here is that if you arrive at this blog to read political (or economic) posts you should know exactly what you are going to get  It is going to be 100 percent anti-Trump, anti-FOX News, anti- Republican policy and no in- between.   If you prefer a false balance instead, well I am sure there are hundreds of media sources and other blogs to meet that requirement.  You just won't find it here at Brane Space.
Posted by Copernicus at 7:01 AM