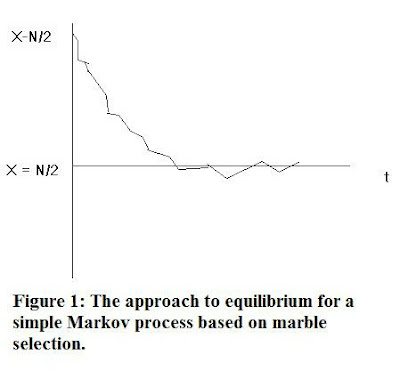 Issues of order and disorder occupy the top rungs of that branch of physics we call statistical mechanics. In this discipline, we apply principles from classical mechanics as well as microscopic thermodynamics to arrive at properties of complex systems and their evolution. In so doing, we can expose the conditions under which spontaneous order can arise from chaos, as well as ascertain systems in which equilibrium applies.
One example is the so-called Markov process which is at the heart of an important model used in statistical mechanics. As an example of this (Ehrenfest) model, one can consider a number of marbles, N, distributed among containers C1 and C2. At precise periods, say every 2 seconds, one marble is randomly selected from C1 (with X initial marbles at time to) and moved to C2 which must have N – X marbles by inference. It can be shown that at some arbitrary future time:
t(o) < t  < t(o) + tN/2There will be either X + 1 or X –1 marbles, with transition probabilities: X/N corresponding to X -> X - 1, and 1 – X/N for X -> X + 1. Eventually, assuming the initial number of marbles large, equalization (‘equilibrium’) will occur with N/2 marbles in each container. The sketch of the approach to equilibrium is shown in Fig. 1.

We expect that as the process continues, oscillations will stabilize about the line X = N/2, so effectively the transition probabilities equalize. The important point of this process is that each such transition is independent of the system’s prior history. Say, there are just 16 marbles in all initially with 11 in C1 and 5 in C2 at t(o). Then successive distributions might appear like this, leading toward equilibrium (equalization of C1-C2 distributions):
C1: (11) -> (10) -> (9) ->(7) -> (9) -> (7) -> (9)
C2: (5) -> (6) -> (7) -> (9) -> (7) ->(9) ->(7)
Notice how the numbers relative to each container ultimately settle into small deviations from the equilibrium value (N/2 = 8). Of course, the probabilities reflect this, and can be represented on a separate graph for probability density plotted against X. This is shown in Fig. 2. In effect, this is the standard ‘Gaussian’ distribution. Mathematically, one can obtain it starting with the basic diffusion equation:

And applying suitable boundary conditions, then using a Fourier transform to solve. This indicates all Markov processes can reduce to a form of diffusion.

The probability density peak at N/2 discloses this to be the most probable state. The reader should again bear in mind, however, that we are assuming thousands of marbles, transitions, to get it! Fig. 2 illustrates the direction in which all physical processes tend to run: from more order to more disorder.[1] By definition, in physics the equilibrium (or ‘equalized’ distribution) state is the one with the greatest disorder.
An interesting analog to the above is based on polymers, using Monte Carlo simulations in what is called ‘the two space algorithm’.[2] In one such computation it is found that a characteristic scale size for the polymer (given by a defined ‘radius of gyration’) fluctuates about some final equilibrium value. Such simulations would seem to have direct bearing on work[3] that provides a model for pre-biotic evolution. In particular, that in given environments a single macromolecule can emerge to dominate, with all others fluctuations only[4].

In part (1) we examined magnetic permeability and the degeneracy function. Accessing such quantities enables us to depict specific types of bifurcations.   The term appears abstruse but simply means a particular dynamical problem solution splitting into two parts. An actual example from fluid dynamics is the famous ‘pitchfork bifurcation’, which has nothing to do with demons! It arises by considering the complex interactions of a controlled water channel whose flow continuously recycles. At some point, beyond a critical value of the Reynolds number (R_c), the single flow relinquishes its symmetry and two stable flows result. These are shown in the figure below:

The critical value (where the vertical dotted line intersects the abscissa) turns out to be 40.5. As before, with the Ising model, we see that hidden complexities manifest in a kind of order or self-organization for each of the bifurcation paths. Indeed, each one of these paths can be thought of as mirror images of the same Markov process, tending to some new ‘equilibrium’ displaced from the original one.An interesting but slightly more complex example from plasma physics is the ‘two stream instability’. In this case we have the plasma dispersion function F(w) which leads to two bifurcation ‘paths’, including a split symmetrical one and a symmetrical one similar to that shown below- but in a different direction relative to coordinate axes.

In this case we have the plasma dispersion function F(w) which leads to two bifurcation ‘paths’, including a split symmetrical one and a symmetrical one similar to that shown- but in a different direction relative to coordinate axes. In finding conditions under which it operates, one considers treating a dispersion relation for plasma waves such that, viz.:

(N.B.   A dispersion relation implies that a relationship exists between the plasma frequency w and the wave number k.)

Where (me/mi) denotes the electron to ion mass ratio, and  for further analysis (i.e. to find applicable roots) we can  define the variables x, y as follows:

or the ratio of the product of the wave number k by the electron thermal velocity (Vo) to the electron plasma frequency.   Plotting the graph on the axes yields a bifurcated graph with 4 roots (Fig. 4). It will always feature a local minimum Fm such that: 0   <   Fm    <  x=y.

When Fm  > 1 there will be two real and two complex roots with suitable approximations for the latter , e.g.

2) Explain how the plasma bifurcation above occurs mathematically.
---
[1] This, of course, is from a thermodynamic viewpoint. In order to elicit thermodynamics from Markov processes, one must somehow assure that the probabilities in question approach that for the Boltzmann distribution, viz. P = exp(-E/kT)/Z, where Z is the partition function.[2] See, e.g. Yaneer Bar-Yam, 1997: Dynamics of Complex Systems, Addison-Wesley, p. 499.[3] See, e.g. Eigen, M. and Schuster, P.:1979, The Hypercycle, Springer-Verlag.[4] The magnitude of a fluctuation can be obtained from probability parameters, in this case multiplying the rms deviation [N]^1/2/2) by 1/N, or in the case of the polymers, [R_G]^1/2 /2) by 1/[R_G]^1/2.
Posted by Copernicus at 2:02 PM