No More Homework For Poor Little School Kids? Give Me A Break!


Left: Me,  teaching General Science class in Barbados, in Peace Corps, ca. 1971.  Right: kids goofing off, wasting time with smart phones.  If kids have time to goof off with social media, then they can do homework - at least 3 hrs. a night.

Albert Einstein feared that our dependence on technology would one day surpass the capacity for actual human interaction, leading to a generation of "idiots". I fear that day has already arrived.  I also believe its primary initial negative impacts are on our kids, especially coming up through middle and high schools.

Don't take my word for it. According to Common Sense Media, teens spend an average of nine hours a day online (paywall), compared to about six hours for those aged eight to 12 and 50 minutes for kids between 0 and eight.  See, e.g.

This then tells me kids today have enormous chunks of time to spare, so there is NO excuse in the world for not being assigned homework, including over holidays - as I used to do while teaching in Barbados in my Peace Corps years. And after!   Hence, when I came across this nonsense in The Wall Street Journal,

I could not believe what I was freaking reading.   We learn for instance:


"The goal of the changes is to give students more time to read, sleep and spend time with family, especially at the elementary level, school administrators say."

Seriously? Do these bozos really believe that freeing up time will deliver more for "reading, sleeping and family"? If so, they're gobbling more marijuana edibles than I can even conceive. Why on earth believe that twaddle when this same age group is on the smart phone up to six hours each day, according to the Common Sense Media study? In fact, my newly minted Ph.D. (Psychology)  postdoc niece Shayl did her dissertation on the use of social media by elementary school kids. She found pretty close to the same time wastage and with little or no parental supervision.

Hell, read the linked article above and Google others!  The kids even admit they're spending too much time on social media.  To me, if a kid has six hours a day to spend on instagram, or playing the FOMO game,  s/he has the time for 3 hrs. of homework per night.  When I taught in Peace Corps and after, three hours per night assigned was the norm. I usually gave at least an hour and a half for both science (Chemistry and General Science) and Math (New Mathematics, i.e. linear programming, group theory etc.)

Another factoid we pick up from the article:

"The average number of hours high school students spent a week on homework increased from 6.8 in 2007 to 7.5 in 2016, the last year available from the U.S. Department of Education. The average hours for students in K-8 stayed flat at 4.7 during those years."

Again, this is pathetic. These students, i.e. in K-8, ought to be able to knock out at least 10 hours of homework per week, especially if they are consuming 30 -42 hours on their phones. The high school kids ought to be able to handle 15-20 hours per week and lots more during holidays - say Christmas and Easter - when I always assigned projects.

Some example problems from a typical homework set for my 4th form math class (equivalent in age to U.S.  9th graders) are shown below: 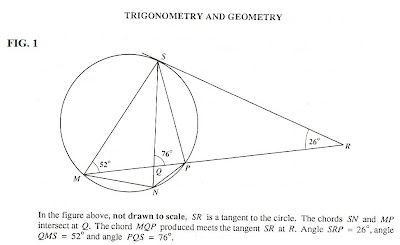 Generally six to seven problems were assigned per night.  At no time did I ever hear a kid make lame excuses, or did his parents come and say the kid was overloaded.  At least also in this "new era"  there are parents with their heads screwed on straight. The WSJ piece quotes one such parent - a Kevin Fulton - who actually withdrew his 5th grader from a school in Houston because the school stopped giving homework. According to Mr. Fulton:

"In my house we're very hands on and homework is a way to determine if our child is falling behind."

Good for you, Mr. Fulton!  On the other hand, a school administrator besieged by concerned parents was quoted:

"We just heard a lot of parents complaining about how much the homework was eating into their family life."

Hold strain! Did you ask these parents to estimate how much their kids' use of Instagram was also "eating into their family life"?  If  they don't know or won't say then they don't have a case. As long as kids are on their cell phones there no excuse not to do at least 2-3 hours of homework per night.

At least one other good point is teachers, many of them, appear to be set against this stupid trend. As we read:

"Homework changes have been met with concern by some teachers who say it takes away a tool to reinforce the day's lesson."

Indeed. And the other aspect is that often there is too much work to complete in one day's session, lab or class so homework fills a critical completion niche.   As for the whiner (a paent named Laurie Lightfoot) quoted at the end of the piece:

"These kids have so much homework at younger and younger ages.. And heaven forbid if they have after school activities or want to spend time with family."

Aw, Laurie you have me all teary -eyed.  Here's a thought: tell them to put their smart phones away (for aimless chatting, texting) and they'll have all the time they need for family life, school activities PLUS homework.

Besides, what will the little dears do when  - and if - they get to university - where the standard rubric is 4 hours study per night (per credit hour in a subject)  to ace an A, 3 hours for a B, 2 hours for a C and so on?

Posted by Copernicus at 5:28 AM

I so totally agree with you, Phil! As a former teacher of emotionally challenged children (1972- 1975, and a current teacher of Religious Education for ages 6 - 7; I'm absolutely amazed to hear how thrilled parents are that teacher's are no longer giving homework assignments! I was equally shocked when my current class of first and second graders thought that I was writing in a foreign language when I wrote their names in cursive on the board! I learned and loved to write cursive since the age of 7. You and I lived it, Phil. As my beloved brother, you know we had a minimum of 3 hours homework each night. Social media for us was asking one another for help with math, English, or science.

No more homework? Look out world at our future "leaders" and adults!

Thanks for your precious insight here, sis!