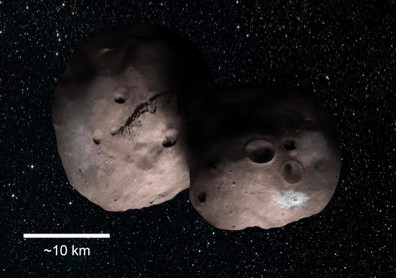 Artist's depiction of Ultima Thule - next target for the New Horizons spacecraft.


At roughly 10:33 p.m.  MST today (05h 33m  GMT, Jan. 1st), the New Horizons craft, the same one that brought us close ups of Pluto, will fly even closer to the outermost dwarf world named Ultima Thule (meaning "beyond the know world").   Assuming one single world, it is estimated to be 30 km (20 mi.) in diameter, close to absolute zero temperature, and with an orbit that takes it once around the Sun every 300 years.

On the other hand, the light curve suggests  planetary "doublet" such as depicted in the accompanying artist's conception, In this case, the distant (4 bn miles)  world looks somewhat like a misshapen dumbbell. How is this depiction justified?   Earlier images of Ultima Thule revealed that it’s actually two objects that are either joined via geo-morphology or very closely orbiting one another. Given such a dual pair of objects reflects sunlight, one would expect light to pulsate as the strangely shaped object rotates and the light varies according to a designated light curve. The trouble is, Ultima Thule’s light curve doesn't show it  getting brighter or dimmer as it rotates.

Alan Stern, the principal investigator of New Horizons, writes in a blog post.:

"We expect that Ultima is the most well-preserved sample of a planetary building block ever explored.  What will Ultima reveal? No one knows. To me, that is what’s most exciting — this is pure exploration and fundamental science!”

The "building block" aspect is easily the most important for planetary astronomers given this distant world was likely formed at the very birth of the solar system. So it will hold key clues to the formation of the other larger planets as well.   To Alan Stern the flyby of this odd -shaped world by the New Horizons, and the images that accompany it, will be akin to the now famous "Earthrise" photo taken by the Apollo 8 astronauts 50 years ago.   This famous photo, for those who need a reference marker, is shown below:

Alas, I was unable to fully partake of the illustrious moment - including astronaut Gordon Lovell reading from Genesis -  because I had been laid low by the Hong Kong flu.  It kept me down for the entire two week period from roughly Dec. 18- Dec. 31st, 1968.

This time around, to be sure, I plan to be following every minute of the flyby to the best  I can given the limits imposed, e.g. on NASA, by the Trump shutdown.