Glad To Get To Yellowstone BEFORE The Selfie-Instagram Hordes Arrived 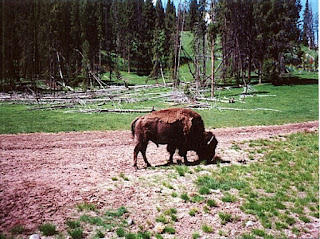 Buffalo seen from our car soon after entering Yellowstone in summer of 2000. 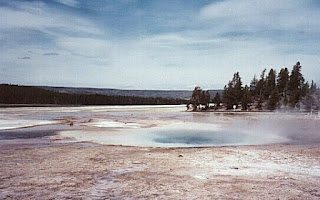 Scene inside Yellowstone - heading to one of the many geysers. 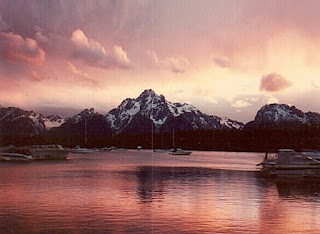 Lake not far from Lodge where we stayed for three days. 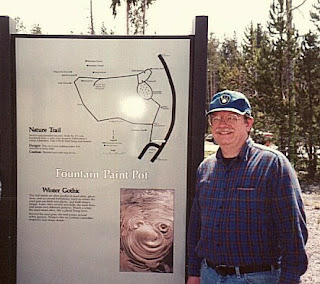 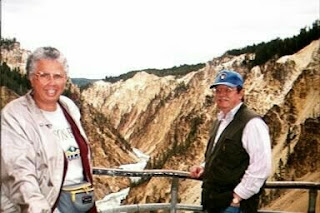 According to a recent detailed report by the UK Guardian,  see,  e.g.
https://www.theguardian.com/environment/2018/nov/20/national-parks-america-overcrowding-crisis-tourism-visitation-solutions

Americans are overwhelming their national parks, literally "loving them to death".   In Yellowstone, the nation's oldest national park, visitation has surged 40 percent since 2008, topping 4 million in 2017.  Fortunately, we (Janice and I) visited the park long before the instagram era, in August, 2000.  This was while it was still largely unspoiled and one didn't deal with traffic jams and clueless boors. (Like the much publicized recent idiot who came to the park to taunt the buffalo).

Anyway, over a period of four months, from  high summer to late autumn last year, the Guardian dispatched writers across the American West to investigate how tourist crowding is playing out at ground level.  The results were not sanguine and showed clearly the time when we visited was likely the optimum.

For example, the Guardian team found:

- Fist fights in Glacier - a small Colorado town overrun by million of visitors.

-  At Glacier National Park MT, there are regular, tense standoffs in parking lots.

- A new level of moron has invaded Yellowstone, illegally flying drones and tossing rocks and debris into the sensitive geothermal features.

According to one park ranger, tourists to Yellowstone now regularly scramble from their vehicles - even temporarily abandoning them -  in the hope of getting close up photos. (We shot our buffalo - shown in the top pic - from the car while briefly stopping. We did not get out.) According to the same park ranger: Most visitors "just don't know how to behave in a wild place".

Well, maybe because they were also never taught how to behave in a non-wild place.

In the case of Yellowstone, which became the first national park in the world in 1804, original visitor numbers were on the low side. For example, in 1904, a total of 120, 690 people visited the then national parks which included: Mount Rainier, Sequoia and Yosemite.   By just the mid-century the numbers swelled to tens of millions.  Soon national park destinations became synonymous with summer vacations.

Today, the pace of visitation has outstripped resources. Worse, recent research has ascertained our national parks bear the disproportionate brunt of global warming - while years, hell decades-  of wear and tear have seen parks' maintenance left far behind.   Traffic has clearly become one of the most visible consequences of the tourist tsunami, with some locations seeing thousands of cars per day jamming the entry roads. In addition, some parks have seen a 90 percent increase in vehicle accidents.   Again, according to one park ranger at Yellowstone, "We're exceeding the carrying capacity."


The numbers explosion since 2008- 2010 is not surprising and is almost totally attributed to the dawning  of the selfie and instagram era.  People today, often the young and clueless (e.g. millennials), don't believe a destination exists unless it's captured in a selfie and dispatched to followers on instagram or Snapchat. This voyeur yen and personal image capture obsession has driven ever more crowds with their selfie sticks, not only to Yellowstone, but to Rocky Mountain National Park, the Grand Canyon and Yosemite. In some cases, like at Yosemite, distracted tourists have become so mesmerized with the scene and getting their selfies they've misjudged their positions - and fallen to their deaths.  They were so taken by getting the photo they didn't look where they were leaning.

What may have to be done to control the mob factor, especially as the planet gets ever more overpopulated, is to adopt a reservation system for the parks. This is already being seriously considered for Yellowstone, and it should be.  In such a system, just like for a fine hotel, reservations would have to be made long in advance - as well as payment.

Yep, it sounds like a sacrilege, but given the masses invading the national parks and the problems being caused - including overflowing porto-potties, it is inevitable.

As I noted, I am glad we got to visit Yellowstone almost twenty years ago - as well as Rocky Mountain National Park and Estes Park (site of the Stanley  Hotel - where 'The Shining' was centered, and many scenes shot.).

Let's also be aware the tourist selfie crush is inundating most of the fragile and beautiful places of the world - where it seems every manjack armed with selfie stick  wants to get snaps. Europe is especially overrun and in places like Dubrovnik, Croatia (a  'Game of ' Thrones'  site)  they are also considering limiting the influx - which, like in France (Louvre), Italy (Venice), often tasks the available resources.  Not to mention all the trash, garbage left behind.   We also beheld the tourist swarm in Prague when we visited in September, 2015, e.g. by the Astronomical clock:

The constant hordes  of humanity eyeballing and instagraming are forcing many more discriminating travelers to consider less popular cities and sights, such as  Jasper, Alberta  (see me entering the post office below)


Yes, travel can be a unique  and even educational experience, but it is now evident too many of the same places are being overrun by tourist crowds which are killing a good thing.  Almost certainly, as the damage from human masses inflicted on precious local infrastructure becomes more pronounced, the numbers will have to be managed or in some cases, like in Venice, severely limited.  Exaggeration? Uh, no.

In  an article appearing  in  In These Times ('Should Cities Ban Tourists?', August, p. 12, 2015) we're informed that Barcelona's Mayor had insisted the popular Spanish destination needed a "tourist cap" and a "moratorium on new hotel licenses".  This since "tourism is now seen by many as a scourge" and as reported by one resident:

"They have urinated on my balcony. They have set fire to laundry and one even defecated in the building's hallway"


Meanwhile, in the U.S.,  reservations to the national parks like Yellowstone will almost certainly be implemented in the next few years. By way of perspective, when we visited Europe in July and August,  1978 we experienced no similar issues. We easily got into the National Gallery in London  and Greenwich Observatory, same with Windsor Castle, Earl's Court, Westminster Abbey, St. Paul's Cathedral, the Royal Albert Hall for a summer concert as well as the Tower of London with no delays and not being forced onto conveyor belts as they have to do now to rigidly control the time allowed (30 sec), i.e. to see the jewels (WSJ, 'Europe's Culture Storm', May 25, 2015)

What gives is the world is a much more crowded place than it was 40 years ago with nearly twice the number of people and also many more affluent people- namely middle class Chinese - who can now afford to travel at will to wherever they want - from African safaris, to Jungfrau Joch in Switzerland, to Jasper, Alberta.

Worse, much of today's tourism is driven by the omnipresent cell phone and the obsession to take selfies of everything on God's green earth.   As comic George Carlin would put it if he was still around: "People, I have to tell ya, this is a very unhealthy habit!"

In the midst of the current  human crush and swarming let us remember it was the French philosopher Jean-Paul Sartre who once pronounced: "Hell is other people".  For many exceptional places in this world, Sartre's maxim is being proven each and every day.