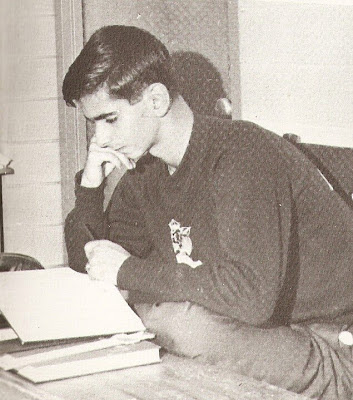 Loyola University, ca. 1966. A freshman studies physics in the laundry room at the Men's dorm (note slide rule at lower left). The dormitory, Biever Hall, had exactly two phones on each of its six floors and none were to be used for any long distance calls- and parents were admonished not to call!


That's the question that must be asked, following all the press recently about the "helicopter parents" who evidently hover around their little lost darlings every second, and even have to twitter and track their every move once they leave for university. (Some accounts in the media report that parents have even taken to emailing their little Fauntleroy's profs to find out he's doing in Physics, Chemistry or whatever)

Are you %#@!*& kidding me! What happened to leaving home, gaining one's own independence and maturing as one should, as opposed to being tied to Mommy's apron strings? (Usually, it's the mommies that are guilty of this but not always).

Well, there are all sorts of excuses to try to account for this parental pathology, but let me give a few before offering my take:

Jean Twenge, a professor of psychology at San Diego State University, the author of 'Generation Me', and co-author of "The Narcissism Epidemic" argues that freshmen of the current generation always heard they were "special", and told to single-mindedly pursue their goals. "Generation Me", she insists, is higher in narcissism and lower in empathy than previous generations. They are more likely to see themselves as singular individuals different from all others. (Well, they're in for a rude shock in college, where all or most of their classmates will feel the exact same way!)

She adds that "today’s students will experience a jarring transition to college, leaving behind lives structured by adults for a free-form world where they have to make their own decisions. "

True! Because most never have lived authentically and independently, they will persist in their parental connection via phone, email or whatever other means Mommy or Daddy can assist junior on whether he ought to take a dump before going to chem lab, or take a chance on being late and.....getting the evil eye from the prof.

"The data show that full-time students in all types of colleges study much less now than they did a generation ago — a full 10 hours a week less. Students are also receiving significantly higher grades. So it appears that academic pressures are, in fact, considerably lower than they used to be.

The time-use data don’t suggest that students feel greater financial pressures, either. When the time savings and lower opportunity costs are factored in, college appears less expensive for most students than it was in the 1960s. And though there are now more full-time students working for pay while in college, they study less even when paid work choices are held constant.

"Based on how students are spending their time, then, it doesn’t look as though academic or financial pressures are greater now than a generation ago. The time-use data don’t speak directly to social pressures, and it may well be that these have become more intense lately"

In other words, in Bajan parlance, these kids are doing more "skylarking": Twittering, Facebooking ("friending") or other nonsense.

The key question is how can they get away with it? How can they have so much free time and not pay a heavy price in low grades?

Hara Estroff Marano, editor-at-large of Psychology Today and the author, most recently, of A Nation of Wimps: The High Cost of Invasive Parenting, seems to have the answer nailed:

"But in a real sense, students don't really leave their parents behind. Their parents go to college right along with them — in their front pockets. That is, the parents are a speed dial away by cellphone. And the evidence is clear that students call parents and parents call students at an alarmingly frequent rate. This, of course, significantly reduces independence.

A student gets a C on her first paper? Instead of absorbing the negative information and figuring out how to resolve the problem or how to do better, the call gets made to home, where Mom or Dad solves the problem, often by calling the school administration. This kind of behavior is, sadly, commonplace today and is a mark of the lack of coping skills among students because all the lumps and bumps have been taken out of life for them until now."

Of course, the other side of this odious "parent extortion" farce is the overall academic extortion expedited by the "Faculty Assessment" or "Teacher Evaluation" forms, filled out by students. Because many colleges misuse these forms, and incorporate them as an integral part of the professional assessment of a professor - students know they can intimidate anyone they dislike into giving them higher grades than they deserve. Why do you think the 'D' is almost unheard of today, when it was quite commonplace in 1964? In today's world, the typical little home-tied wimp would have a breakdown if he or she received a 'D'!

Mark Edmundson, writing in Harpers, Sept., 1997, p. 39, has also observed how this sort of "evaluation" activity (especially by immature students) plays directly into the consumer mystique, or student as "consumer" of knowledge":

"They're pitched into high writing gear....stoked on a procedure they have now supremely mastered. They're playing the informed consumer, letting the provider know where he's come through and where he's not up to snuff....

For someone growing up in America now, there are few available alternatives to the cool consumer worldview. My students didn't ask for that view, much less create it, but they bring a consumer weltanschauung to school, where it exerts a powerful and largely unacknowledged influence"

So why aren't students today equipped to do without Mommy or daddy, say like the 1966 Loyola Freshman (photo) beating his physics books in the laundry room? One last apologia from Linda Bips, psychologist:

"Many of today’s students lack resilience and at the first sign of difficulty are unable to summon strategies to cope. The hardship can be a failing grade on a test, a cut from the team, or a romantic breakup. At the first sign of trouble many become unable to function and persevere. Often they even anticipate difficulties and their anxiety alone paralyzes them."

She then goes on to point out just how many incoming college students are on "meds" and writes:

"The number of students who arrive at college already medicated for unwanted emotions has increased dramatically in the past 10 years. We, as a society, don’t want to “feel” anything unpleasant and we certainly don’t want our children to “suffer.”

And this compulsive "happiness" shtick and obsession, is the primary part of the problem as I see it. People, children, college students...are not permitted to feel natural downs and cycles of mood (which are basic to the human experience) without being confronted by stupid happy face dreck and the clamor of the perpetual Pollyannas and optimists telling them to "get over it". But why the hell should they, if they break up with a first love, or majorly flunk a major exam (and don't whine about it to the prof?) Thus, under ferocious corporate and media pressure, has our whole society mutated into one monolithic Happiness Asylum which frowns on all behavior or emotions not stamped with the Yellow Smiley!

Thus, the expectation of college kids is that they must be perpetually driven by Mr. Smiley. If not, there's gotta be something wrong so they need Zoloft, or whatever the latest antidepressant magic is. And so it is they cease to feel their natural pain, and turn to plastic culture instead to get their optimist fix.

As Prof. Bips puts it:

"The resulting problem is that by not experiencing negative emotions, one does not learn the necessary skills to tolerate and negotiate adversity. As a psychologist, I am well aware of the fact that some individuals suffer from depression and anxiety and can benefit from treatment, but I question the growing number of medicated adolescents today."

Where I might disagree with her is when she opines:

Well, not compared with the early 60s! It is a gross error to believe in any way today's kids live in a more stressful world -and that includes one with the overhyped "terror" bogey!

Recall in late October, 1962, MY generation - still in high school - was confronted the threat of all the then nuclear weapons in the U.S. and the U.S.S.R. being released and the end of civilization as we knew it. This transpired with the Cuban Missile Crisis and specifically the date JFK actually had U.S. Naval vessels block Soviet ships bound for Cuba with missile parts.

At the time JFK was being pressured by the Joint Chiefs of Staff, and especially Gen. Curtis LeMay, to bomb Cuba. Kennedy pondered such a move, but in the end turned to the blockade - and good thing he did. Former Defense Secretary Robert McNamara noted in a 1993 NBC interview that, unknown at the time, 93 IRBMs in Cuba were armed with single megaton warheads and targeted at 16 cities on the U.S. East coast.

Had Kennedy foolishly followed the Joint Chiefs' advice, we'd not even be having this conversation now. Cuba would have unleashed its 93 intermediate range missiles as the first U.S. bomb fell, the U.S. would have struck back with 60 of its nukes, then the Soviets would have struck the U.S. with their 5,990 warheads, and the U.S. retaliated on the Soviets in turn. THAT, my friends, is real stress! Not localized to one city, and not rendered so by an artificial 24/7 News cycle, or otherwise hyped up!

Even though the Missile crisis ended on a satisfactory note, we still had to face the threat of Armageddon every damned day - with over 6,000 Soviet missiles aimed at us. We also had to face major political assassinations, including JFK, Martin Luther King, Bobby Kennedy, Malcolm X- that perverted the whole future historical arc. So don't hand me any bullshit that our age didn't have stress, or was "lesser" in stress - political or otherwise- than now. We also had the draft (for Vietnam) to confront, unlike today's kids who don't have to worry, since there's a volunteer army. We handled all that stress, and didn't piss in our pants every night and whine for mommy on the phone to hold our widdo hands while in college.

The sad fact is that today's lot is so tethered electronically to a cyber-world that they're devoid of real world experience. They know only the artificial experience of assorted video games, twitter feeds, or Facebook messages. In this artificial world kids never have to grow up, just like perpetual Peter Pans. The problem is, at some point they will have to cut those apron strings and for once become independent citizens and intelligent voters.

Let's hope they are up to it! On that note, I certainly agree with Prof. Bip's final take:


"...but I don’t believe that the college experience itself is more intense today than the past 10 years. What I do think is that many students are often not prepared to be young “adults” with all the responsibilities of life"