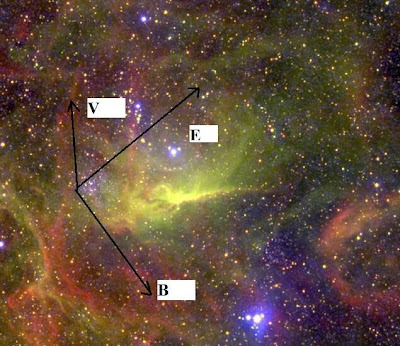 With this new series, we start to look at examples of solving some basic plasma physics problems. Plasma physics, of course, is now one of the most fundamental branches of physics- especially as it has many fundamental inputs into solar physics, astrophysics and high energy particle physics.

Most plasma physics courses, at least in the U.S., are not taken until the first year of graduate school, and when one understands how plasma physics intertwines many other difficult physics areas (electricity & magnetism, thermal physics, statistical mechanics, etc.) this is understandable.

Anyway this first example problem has multiple parts, and is as follows:

A proton moves in a uniform electric and magnetic field, with fields given by:

b) Find the proton's E X B drift speed

d)Find the gyro-period, gyration energy and magnetic moment of the proton.


Here we enter plasma “orbit theory” and consider a charged particle (say of charge q) in a uniform and constant magnetic field (B).The governing equation of motion is:

The motion here is such that v is always perpendicular to the force acting on the particle so
v ^ F, implying circular motion. Thus:

where the first term denotes the velocity along B which stays constant so that d(v_par)/ dt = 0. Meanwhile:

(setting the centripetal force = to the magnetic force producing it)

The quantity r is none other than the gyro-radius. Solving for it one finds:

While on this topic it is useful to consider this as well: The "gyration velocity" is simply the magnitude:

Now, given all the preceding, diligent readers should be able to work out the rest, with just a few pointers.Bear in mind the gyration energy:

where u(m) is the magnetic moment.

E is in +y direction.Both electrons and ions (e.g. protons) undergo a corkscrew motion around the centers of their paths (guiding centers) and have drift velocities in the same direction in this field orientation.This drift motion occurs in crossed (E X B) fields and hence this is called “E cross B” drift.

Bear in mind when you go to calculate E X B you need to take the vector directions into account (using the right hand rule) based on the information supplied in your problem. From all this, keen readers (I doubt bibles will help!) ought to be able to work out the assorted parts of the problem without too much difficulty. The solutions will be posted when the next instalment is given.
Posted by Copernicus at 2:31 PM