What Is It About Federal Reserve Chairmen? 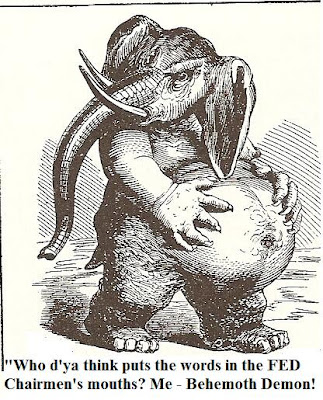 What is it about Fed Chairmen and their yen to cut Social Security? I ask this after hearing the news that current Fed Chairman Ben Bernanke took another swing at Social Security and Medicare today, saying yet again that they'll need to be cut "to protect our nation's financial health". Recall that some weeks earlier Bernanke when asked about Social Security and its "costs" and possible cuts was blunt, saying: "Where do you think robbers go for the big bucks? They go where the money is! Banks!"

Well, thanks for clarifying that one, Mr. Ah...Fed Chair! But before one runs for the pitchforks and rope, recall Bernanke isn't the first Fed Chair to make such a proposal! In 1997, Alan Greenspan demanded an artificially much lower COLA increase than had originally been proposed (actually, this year and the next, there probably won't be any COLAs). Then, in 2003, Greenspan went on record in an appearance before the Senate Banking Committee and asserted without blinking an eye that "Social Security benefits need to be cut to pay for Bush’s tax cuts."


In other words, he'd support much greater inequity, with even more upper 1% income pigs feeding at the taxless trough (though they control 57% of all wealth) and let Grandma and Gramps eat cat food and split their pills the rest of their days!

Social Security payments, especially with COLAs, do everything the Fed doesn’t want. They pour more money into the economy, but not via productive labor or capital investments. People receive their checks merely by existing and breathing day to day, and having already paid into the system with FICA deductions.

Evidently, Greenspan has surmised – quite correctly – that the tax cuts accomplished the same for the well off by pouring more money into their hands each year. However, he’d obviously reasoned – based on his Senate Banking Committee testimony- that it made more fiscal sense to let the wealthy keep their ill-gotten gains, than to preserve Social Security. This despite the fact that he orchestrated the FICA hike in 1983 under Reagan to do just that given the coming Baby Boomer wave.

Caustically writing about this, in his article Greenspan's Con Job, William Greider noted at the time:

"These distortions are not harmless; they become solemn writ for lawmakers and opinionmongers. Greenspan is especially destructive when he opines on public matters outside his supposed expertise as a central banker. His thinking is still anchored by Ayn Rand's brittle social philosophy: Let the strong prevail, let the weak pay for their weakness.

The Fed chairman's recent remarks on Social Security and the federal budget deficits offer a particularly chilling example. In a House budget hearing, he elided the two subjects in a way that produced predictable scare headlines and chin-wagging editorials. The deficits must be dealt with promptly, he warned, because the baby boomers are about to retire. Then Social Security will be in trouble. And so government must cut benefits now, before it's too late. 'I am just basically saying that we are overcommitted at this stage,' he explained. 'You don't have the resources to do it all.'

That sounds like manly wisdom. Greenspan was widely praised for courage. He should more properly be pilloried for gross mendacity. He is proposing a con job on ordinary working Americans--a bait-and-switch game on a grand scale--in which the payroll taxes they paid into Social Security over many years will now be diverted to other purposes, including the generous tax reductions G.W. Bush has enacted for the very wealthy and the corporations. It doesn't sound so noble when you put it that way. Greenspan knows these facts but also knows his big lie will probably endure as conventional wisdom. Typically, the media shorthanded his comments to create a larger fallacy--that Social Security is part of the deficit problem, therefore future retirees deserve to take the hit. "

Of course, the same is transpiring now, as most media (except the "liberal") fail to cross the t's and dot the i's so people come away with actually being convinced that Social Security is responsible for the mammoth deficits, as opposed to wanton, runaway military-defense spending which ate up 55 cents of every tax dollar last year, and is en route to do to the U.S. what the same military overstretch did to the Roman Republic 1600 years ago.

And in the same way, pretty much, Bernanke is echoing the bogus clarion calls as his predecessor. The media meanwhile ought to be aware of the problem, as well the entire elite Overclass they and the Fed Chairmen panders to, which is embodied in what William Greider also noted(ibid.):

"The problem is, the government borrowed this money and has spent it on other projects. But the trust fund, despite what right-wingers like to claim, is not an accounting gimmick. The government is legally obligated to pay back the money (as surely as it is obliged to repay Treasury bonds). The borrowed trillions, in fiduciary terms, belong to the "beneficial owners"--every worker who has paid higher payroll taxes for the past twenty years.

And further and even more to the point:

"This historic tax shift (I think of it as the "crime of '83") was most convenient to the Reagan Administration because Reaganomics had just created huge budget deficits by cutting income taxes for the monied interests and pumping up the military budget. The burgeoning surpluses from the Social Security payroll tax would help offset the economic impact of the deficits. Hardly anyone noticed at the time, since Democrats cooperated in the "solution."

And isn't it coincidental that now Bernanke is parroting the same line of jabber, as many are calling for the U.S. to not only ready itself for a much longer stay in Afghanistan, but to also put Iran into its target sights, as if it has the money to afford to do so!

Greider in his piece went on to write:

"Here is the truth: Social Security is not in deficit, not now and not for at least the next forty years. The trust fund will have a surplus next year of $1.8 trillion. In 2011 when, Greenspan warns, the baby boomers will start retiring in large numbers, the surplus will be $3.2 trillion. These stored savings, plus future payroll-tax revenue, are sufficient to pay all retirees the current level of benefits through 2042, according to the fund's very conservative actuaries. "

But note here that, IF all the Bush tax cuts are all allowed to go forth next year (and we're hearing assorted spurious arguments for that, based on the need for more "demand" - despite the fact we're facing huge deficits) the added deficits will come to nearly $3.3 TRILLION. And these will have to be paid for. No coincidence we behold Bernanke (and other deficit hawks like those on Obama's "Deficit Commission") on the attack in advance, but against Social Security to pay for that bill which will be tallied at the end of 2020.

So, what is it about these Fed Chairmen? Why so hostile to a tiny bit of security for the average citizen? What is the reason? One needs to recall the Federal Reserve Act of 1913. On a bleak December day in 1913, with most members of Congress absent for the holidays -this misbegotten Act, under a veil of deception and hubris was passed into law. Essentially, it removed the Constitutionally- appointed money creation powers from the Treasury and "delegated" them to a private Banking Corporation called the 'Federal Reserve'.

The law removed from Congress the right to create (print) money, or have any say or control over its creation. This instead was granted to the Federal Reserve Corporation. To underscore the importance here, one needs to realize that money is the lifeblood of an economy. It is more fundamental than any other resource unit and ultimately is the primary determinant of the quality of life of the individual.

As James Livingstone has noted in his monograph ('The Origins of the Federal Reserve System- Money, Class and Corporate Capitalism, 1890-1913), p. 233:

"...the creation of the Federal Reserve is an episode in, or evidence for, the emergence of a modern ruling class.. "

How so? Because all money created - on average $30-40 billion a year- is brokered into the system. That is, made available by escalating debt engendered at the instant of money creation. This is achieved by the Fed using the money created to purchase government bonds, then making this (debt-burdened) product available to private banks, who must charge much higher interest than the bonds to secure what they regard as a 'reasonable return'. In times of recession like now, the Fed meanwhile can use tricks like "quantitative easing" to buy vast amounts of U.S. treasurys as it lowers yields, and: 1) effectively flood the money system with cheap money, and 2) drive the value of the dollar down (it's now at a 15 -year low compared to the yen, according to today's Financial Times)

And so, while nascent Americans, in their revolutionary fervor, had thrown off the shackles of one monarchy, within 137 years they came under the boots of another. This one devoted to the business and banking classes, who demanded ever more favored treatement vis-a-vis 'ordinary' citizens.

Now, to secure that elitist mandate, the pirates of privilege, driven by other pirates like Peter G. Peterson (long time enemy of Social Security) have set their sights on the fattest "pie" which they believe will make the country safer economically.

Yes, indeed it will, for THEM! Would that we could entice the tea baggers to divert their anti-elite instincts to the proper targets that most directly affect their own economic interests.
Posted by Copernicus at 3:25 PM

individual clients around the world.