More Evidence Many Are Fed Up with Hyper-Hating Xtians! 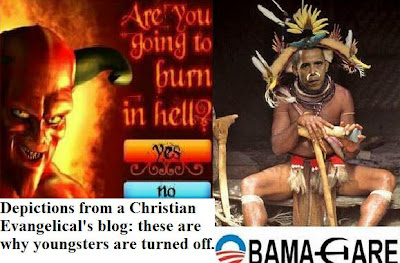 In a previous blog:

I noted how a sizeable proportion of “Millennials” (the 18- 29 age group) have become disenchanted with extreme Christianity (especially of the fundamentalist variety) that aligns itself with political agendas and does so in an extremist way. As “Exhibit A” of this sort of nastiness, readers can see the above image of Obama as depicted by a fundamentalist Christian on his blog, as he rails against “Obamacare” (never mind he and his family could benefit from Obama’s plan, for example by enrolling their kids on his own health plan up to the age of 26)

No surprise then these Generation Y’s are turned off by the overt politicization of faith, and see the entry of hateful political agendas as actually compromising the alleged truth claims of the more conservative sects. After all, how can a sect of any type claim a basis of “the love of Jesus Christ” then depict a fellow human (no less a president) as reprehensibly and disrespectfully as in the image? It doesn’t square.. not one iota. According to Gabe Lyons, author of The Next Christians: The Good News about the End of Christian America:

“Young Christians are avoiding alignment with politics and power and getting back to basics: love and service”

Many of these youngsters have also beheld the futility and counterproductiveness of waving the “Hell” and hate flag at other people, bearing in mind the warning in Matthew to “judge not lest ye be judged”. So rather than tempt the hand of their putative deity, they are backing off and choosing active service over judgments, and love over hateful intolerance and pseudo-sanctimony more befitting the Pharisees that Christ actually railed against as "whited sepulchres". In other words, the young generation of faith no longer see it as incumbent upon them to follow in the footsteps of their 'whited sepulchre' elders!

Now a further survey, by The Barna Group, confirms that these extremist Christians are indeed their own worst enemies - and indeed are tarnishing the name of all decent Christians. People like Fred Phelps with their Hell –mongering about who is going to Hell (most of America), when they evoke hate- do themselves no service.

According to the Barna Group poll, one in ten Americans couldn’t think of one positive contribution Christians have made to society because they “hadn’t made any”. Worse, one in five Americans asserted "Christians have incited hatred or violence in the name of Jesus Christ", while one in four respondents couldn’t think of a single positive contribution made by Christians in the past four years (the same interval during which Rev. Fred Phelps and his crazy cult grabbed headlines with their Hell threats made against homosexuals, as well as soldiers serving in the military, and a campaign of terror and murder was launched by extremist fundies against abortion providers – including the assassination of Dr. George Tiller).

A full 12% disclosed that intolerance or hatred from or by Christians was a major reason for their disaffection. Of course, many extremist, hard-headed fundies like to rant and rave that no one should pay attention to such "political correctness" - and thence they make their specious cases for issuing judgements, Hell threats and hate against any and all (despite admitting they themselves are "sinners"!). Most amusing is how some of these zealots place target sights on atheists or unbelievers, when in fact they condemn ALL other believers unlike them to perdition! Cognitive dissonance anyone?

Will they get the message and back off? Very doubtful! In Barbados, we had a saying: "wrong and strong" and that exactly applies to these small, officious fundamentalist-evangelical sects - or more accurately cults- who believe 100% they have all truth on their side, and no one else is even close. But this arrogance, as seen from the Barna Group polling, is now having a negative effect not only on young people but a significant proportion of Americans in general.

They fail to see how or why the words of a peaceful rabbi from Galilee could be invoked to stir up so much poison, dissension and hatred in a world already overflowing with it. Certainly, love and tolerance are stronger incentives in the world as it is, and even many atheists would concur that if Christ was a true historical person, and could come forward in time, he'd retch on beholding what so-called "followers" had done and preached in his name. No doubt, he'd extend that "millstone" around the neck to them - earlier reserved for those who'd compromse children - and tell them "Depart from me, ye cursed, you do neither my love or my name any good! You have instead turned many away!"
Posted by Copernicus at 8:42 AM