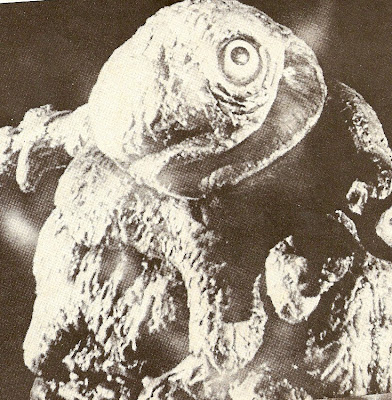 A speculative depiction of a possible inhabitant of the planet Gliese 581-g, adapted to survive in the planet's relatively high gravity and rocky terrain.
Currently the astronomical hot lines are amped up to capacity at word of the discovery of an “Earth –like” planet orbiting a red dwarf star (the Sun is a yellow dwarf) about 20.5 light years away. In terms of astronomical distances, while not exactly the “next door neighbor” it is at least “down the block”.

The discovery follows eleven years of painstaking observation using the Keck telescope in Hawaii, and in particular using its advanced spectrometer which measures the radial velocities of stars. When these display a kind of wobble it's possible to infer the presence of additional nearby masses and actually also the mass of the inferred bodies (if the mass of the central star can be estimated). We use what's called "the binary mass function".

The Gliese 581 system, named after the central star, actually has three planets in its system discovered thus far: one of them is too close to the red dwarf and has temperatures too high to support life, while another is too far. Meanwhile, planet ‘g’ is at just the right distance – in a habitable zone- or what astronomers call one of the “Goldilocks planets” since it occurs in the favorable “Goldilocks” zone. However, I suspect we shouldn’t get our hopes up too high to find any life forms there, and it’s time to get a grip on reality.

First, particulars on the estimated physical properties: the planet is estimated to be 1.2 to 1.4 times the diameter of Earth (let’s say it’s 1.3), and its mass is three to four times that of Earth. These two quantities are critical because they allow us to gain an estimate of the acceleration of gravity on the planet’s surface, or ‘g’.

When we insert these into the above equation, we arrive at a g-value:

This compares to the mean Earth value (averaged over all locations) of 9.8 m/s^2

This means the acceleration of gravity on the planet is nearly double what it is on Earth. Now, since the weight (a measure of the attractive force on a planet, for a given g) is w = mg, then a 200 lb. astronaut would weigh out at nearly 400 lbs. there. (Remember the mass can be as much as 4x larger which would yield g = 23.3 m/s^2)

What about any life forms? In this sort of gravity you can be sure if they are there they won’t look like us but are more likely to be oblate monstrosities and adapted to the temperatures with averages between -10F and 55F. (See attached hypothetical image for an inhabitant, based on what we know about Gliese 581 g)

Another aspect that hasn’t been mentioned too often is that the planet appears to be tidally locked into its orbit with the dwarf star, yielding an orbital period of 37 days so that its year is about one tenth of a year on Earth. In addition, the tidal locking means one side of planet ‘g’ is always facing toward its Sun – the other side toward darkness. No creature in its right mind would live directly in either of these extreme zones, since it would freeze in one and boil in the other. Thus, the only place to live would be exactly within a razor thin terminator zone straddling the extreme dark and light hemispheres. This zone would likely be about 100 miles wide at most, and so any intelligent life would have to confine their cities, civilization within this strip - no spreading out.

Further, some atmospheric modeling of this bifurcated world has yielded contradicting results. For example, under one modeling all the atmosphere freezes on the night side, which means it wouldn't be very much on the day side. However, the heavy gravity -much more than Earth- lends credence to the possibility that the atmosphere is fairly evenly distributed. Toss in a planetary greenhouse effect (which doesn't need humans to incept - look at Venus) and there could even be equable warming which moderates the extremes somewhat.

My take is that while the discovery of Gliese 581 g is an encouraging find, and now we have discovered nearly 500 worlds in other solar systems- we would do well to look further for planets that genuinely possess Earth type conditions, with much higher probabilities of something living there. Indeed, if there were advanced life forms on Gliese 581 g they’d surely have contacted us by now given that signal- bearing radiation from our planet has been beaming out into space for the past 70 years or so, more than ample time for them to receive it and execute a response. Of course, if they're advanced but lack appendages, digits ( like the monstrosity shown) that are necessary to construct appropriate detectors - they'd not be able to receive our incoming commnications, far less respond to them!)

Yes, there may well be more primitive life forms there- but again, let’s keep a tempered outlook here. Also, do we really want to meet up with hypothetical aliens as depicted in the attached image? Well, we can always hope Pastor Mike gets there first to save them with some water (maybe thawed from an ice cap) and his KJV. He'd indisputably have more luck with his "witnessing" than for atheists on Earth! (Though he might want to hope they don't have an appetite for uppity humans!)
Posted by Copernicus at 8:29 AM