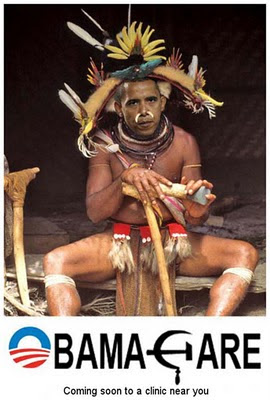 One of the Tea Partyers' favorite images, circulated widely both on their blogs and on signs at their rallies. Though touted as simply an 'exercise in free speech' - the use of a known racial stereotype (going back to the Old Confederacy) shows it is essentially racist. The spin of the TPs is to invoke such blatant imagery then merely profess they are expressing 'concerns about our country'. Bull-shit!


We now are aware, as if we weren't already, that a significant proportion of tea partyers are racists. We can assess it from the blatant racial stereotype images they portray of President Obama (see that depicted by one Florida Tea Partyer on his blog) to the comments and remarks they make, using subterfuge words like "socialist" to conceal the actual N-word they'd dearly love to spout.

More in your face evidence of their racism (denouncing "liberals, their n.....r pals and socialists") arrived via e-mails sent to several bloggers on smirkingchimp.com, compliments of the "King Street" group in Houston, outraged at the efforts of 'Houston Votes' to get out the minority vote, see, e.g. this from blogger William Rivers Pitt: (http://www.smirkingchimp.com/thread/william-rivers-pitt/32039/what-me-racist)
Seems the local teepees were convinced voter registration laws were being violated. Well, in the Jim Crow South ca. 1964 this was also the sentiment in places like Selma and Birmingham, Alabama, and Jackson, Mississippi, if a black showed up within 500 feet of a voting booth. Within an instant, yahoos bearing Johnny Reb regalia would show up blocking the entrance and asking the would-be voters if they'd taken their "Voters qualification" test yet.

Now in Milwaukee we behold a somewhat different tack, as reported in today's Milwaukee Journal-Sentinel, of large billboards around the town featuring images of brown and black people behind bars, staring out helplessly with the three foot sign beneath reading: "We Voted Illegally!" Not so blunt as using dogs, clubs and firehoses to keep black voters away....as they did in Selma, but intimidating nonetheless....given we know nearly 1 in 2 black males in the U.S. of A is already under control of the justice system (either via parole, on probation, in prison, or otherwise.)

The question resurfaces: Are the Tea Partyers racists, or simply ordinary common folk with a load to get off their collective chests? We need to know as the Nov. 2 elections approach.

According to the nation's oldest and largest civil rights organization, the NAACP, a report was released last Wednesday declaring that "the Tea Party is permeated with concerns about race." The report also added:

"Tea Party groups have given platform to anti-Semites, racists and bigots and Have attracted white nationalists looking for recruits. The Tea Party movement has unleashed a still inchoate political movement who are in their numerical majority angry middle class white people who believe their country, their nation has been taken from them."

Which explains the "Take back America" signs one often sees associated with them.

The NAACP report and research was done by Devin Burghart and Leonard Zeskind of the Institute for Research and Education on Human Rights - an organization dedicated to examining and mobilizing against racist, anti-Semitic and far Right social movements. To reach their conclusions they analyzed six nationwide Tea Party networks at the core of the movement and concluded that the leaders of all but one, FreedomWorks, a libertarian group in Washington, had raised questions on the validity of Barack Obama's birth certificate.

While some past posters on this blog have tried to suggest this raising of questions is merely out of curiosity, since Obama has never provided his official birth certificate (in fact, Hawaiian officials have repeatedly posted it, they just haven't noticed - or maybe as one wit opined, they merely want their own personal copies sent to them!) the truer fact is that to all sensible people the matter is closed. Obama is a bona fide American citizen, and no amount of aimless, clueless chatter about his "Kenyan father", or any other deflecting baloney will change that. They need to deal with reality. Or at least drop the "phony birth certificate" dodge and 'fess up the real reason they believe Obama's presidency is illegitimate!

Curious as to whether this movement might have some historical precedents, I did some work on my own, using records, videos etc. supplied by a number of German friends. It didn't take to long to track a similar movement known as the 'Wanderfogel' active in pre-Nazi era Germany and with a mandate to "take the country back to its roots". Not coincidentally, the movement achieved acceleration concomitantly with the skyrocketing German inflation in the mid 1920s, which ultimately saw the end of the Weimar Republic.

The "taking the country back", of course, echoed the much earlier Volksich movement which was anti-Semitic to the core. The nattering about "discipline" especially fiscal, hailed from an earlier time of German self-dependence, and one of the Wf members quoted in the film referred even to a remark made by SS High Chief Goebbels that: "Men of courage are bred on the farms, but cowards in the cities."

The zeitgeist operative was that when "the shit hit the fan", say economically, one would want to take care of his own and this was more plausibly done in the setting of the bucolic German countryside than in its cities where people would naturally be dependent on shipments of fuel and grain to survive. Thus, survival demanded one become an agrarian and cease being dependent on the government. This played into the then rising Nazi ideology, and especially its anti-Semitic rhetoric, e.g. that most Jews were "merchants and bankers" bleeding the nation dry.

Some may believe this odd, but even in a trip to Germany in 1985 I found this meme remarkably prevalent. One German (in Hemsbach) even informed me with a straight face: "How can you expect plain Germans to do better, when the Jews who own the newspapers in the United States always give us the back of their hand?"

Well, not too terribly different from what Tea Bagger princess Christine O'Donnell recently opined at a "Value Voters Summit", as she unleashed a stinging attack on "ruling class elites determined to drag down the country" (Source: Church & State, October, 2010, p. 7). O'Donnell went on to assert (ibid.):

As indeed the Vanderfogel and their descendants would claim too! (And btw, many don't know how much the anti-Semitic sentiment increased in Germany after the shenanigans of Goldman Sachs were disclosed, particularly their profiting at the expense of poor Germans during the 2008 meltdown, especially undertaking 'buyouts' of venues, e.g. subsidized apartment complexes, many ordinary German workers counted on to survive).

Will the Tea Party usher in a Fascist-style takeover, similar to what befell the Weimar Republic by 1932, when Hitler was awarded the Chancellorship? We don't know, only that we do hope our Constitution (which the teepees love to quote and worship) will be strong enough to prevail no matter what menagerie of kooks arrive in D.C. as a result of next month's elections. In the meantime, it might be a wise thing for ordinary progressives to re-read the 2nd amendment again and become familiar with their own state's provisions for owning firearms and under what circumstances they can be used. Ordinarily, I'd never advocate such a thing, but after seeing a liberal having her head stomped in by a Kentucky teepee last night at a Rand Paul rally, I don't think we should take anything for granted.
Posted by Copernicus at 9:16 AM