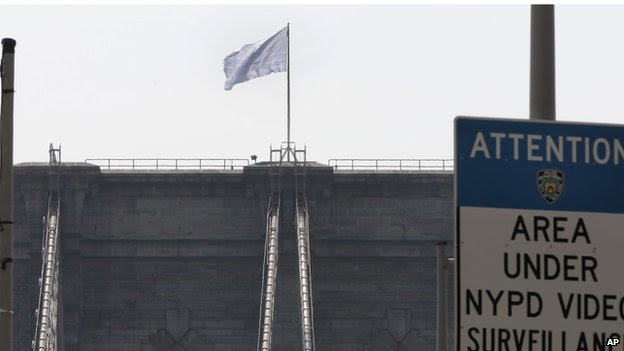 After weeks of many Americans going batshit crazy over a bleached out American flag being sent up over the Brooklyn Bridge and the New York Daily News bawling: "This time it's a flag, next time it will be a bomb - we now know who dunnit: two German artists. Of course, this must disappoint the hysterical screamers no end, especially those who'd originally blamed it on "f*cking liberals and leftists".

The Germans, Matthias Wermke and Mischa Leinkauf, admitted to doing the stunt and even presented videos of their escapade.  The NYPD, burned by this "security transgression",  still insists "others may be involved."  After all, how could two German clowns escape all those 24/7 security cameras? The cops are also considering getting the duo extradited from Germany. Gimme a break already! Give them a huzzah, and let it rest. Show everyone that the cops in this country can display some level of temperance for once, instead of over reacting - as we've beheld in Ferguson, MO and NYC (man choked to death after putting up mild resistance on being charged with selling "unlicensed" cigs.)

The cops actually wondered originally if it was an art project, and according to the two Germans, it was. They carried the flags in their backpacks and scaled the same cables as construction workers. Another added substantiation, Wermke and Leinkauf have a penchant (and talent) for this type of daring do as they show on their website. On this morning's CBS Early Show, in fact, a clip showed them acrobatically jumping from walls, hanging from architecture in Berlin and scaling buildings across Tokyo.

So for my money, it's a slam dunk these two did it.

The two Berlin natives claimed their inspiration was John August Roebling, the original German-born architect of the Brooklyn Bridge. July 22nd was the 145th anniversary of Roebling's death. The morning the artists swapped the flag.

The best option for the NYPD? Let it rest and move on instead of making it into a huge "federal case" and proving again we're so hyper-hysterical we can't even take a joke. Or an off the cuff art project.

What would Robin Williams do? Would he shout to have the pair extradited and prosecuted for swapping flags on a bridge? Hardly! He'd make a joke about it, just as George Carlin would.

Nothing is gained by treating this as a major crime, except to prove again to the world we haven't calmed down since 9/11 and can be played any time for our emotions.