4. Radioactive Decay:
We begin with the recognition of the various types of radioactivity - in the form of their specific particles- and how these can be measured in terms of activity. Probably the last part is the most intuitive and easiest, so we begin with that: using a device called the Geiger Muller counter (shown in Fig. 1) with the general principle illustrated in Fig. 10 below:
Fig. 1: The Geiger –Muller Counter 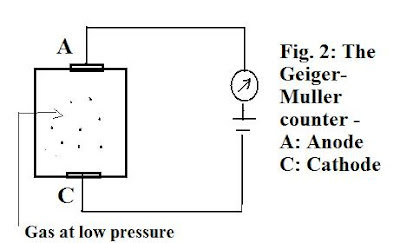 First, note that Fig. 2 is a simplification. In actual fact the anode is a tungsten wire with extends through the cathode, which is a metal cylinder. Both are then fitted into a gas-filled envelope which is the Geiger-Muller tube. A typical low pressure gas to use for the tube is Argon (Ar) which at a pressure of about 10 cm of Hg (compared to 76 cm Hg for atmospheric) easily fills the tube via diffusion. A potential difference (p.d.) of 900- 1,000 V is then applied between the anode and cathode (A and C in Fig. 10). The applied p.d. has the effect of slightly stressing the Argon in the tube so when radiation enters its ionizing action produces more ions from the gas in the tube. In other words, the radioactive substance causes the gas atoms to lose electrons.

The electric field produced (e.g. E = V/d) then accelerates these ions and many more ions are produced by way of collisions. In effect, an ionizing current is quickly built up and triggers the tube which is connected externally through an amplifier to a count-rate meter .

The simple diagram of Fig. 3, using a simple experiment, graphically shows the differences in the radiations with respect to an applied magnetic field.
If one holds the thumb of one's RIGHT hand into the image (to represent the B-field direction) then the electrons (beta particles) will display a direction coincident with the curving fingers of the right hand. That is, clockwise. Now, since the alpha particles are positively charged (, e.g. He++, as opposed to the negatively charged beta particles, e.g. e-) they will go in the opposite direction.

2) Beta (b)  particles - while having less ionizing power than alpha particles (because of much lower mass) have 100 times more penetrating power. A sheet of aluminum at least 3mm thick is needed to absorb them.

Typical Experiment using the Geiger-Muller Tube as depicted in the graph of Fig. 4. 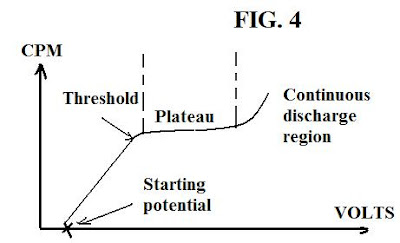 1. After setting the high voltage supply to minimum high voltage, bring a beta source to within about 6” of the G-M tube.

2. Gradually increase the voltage until the counting just starts, disclosed by the clicking sound. This is the "starting potential" - so record the voltage at this point.
3.Increase the voltage to a value 100V above the starting potential - this should provide operation near the threshold (See Fig. 4)
4.Adjust the distance between the radioactive sample and the Geiger tube until the meter reads about 4,000 cpm. (Leave the sample at this distance for the balance of the plateau curve determination)

7. Plot a curve on graph paper using cpm as the y-axis and voltage as the x-axis, The end result ought to be similar to that shown in Fig. 4.
Another experiment:

Using a beta source, plot cpm as a function of distance between the source and counter. Note the extent to which the curve obtained obeys the inverse square law (i.e. the intensity or rapidity of the count is inversely proportional to the distance of the detector from the source).
At the end of the experiment, the student should be able to identify all the possible sources of error including systematic and measurement errors.


5. The Activity  of a radioactive source.

We define the activity of a radioactive source as:

A = dN/dt = - lN
Where  l  is the decay constant. The negative sign appended to the equation indicates that the amount N is decreasing with time t.

Where Bq is Becquerels..
The decay curve is obtained from the fundamental law of radioactive decay, based on some original number of atoms No decaying with an activity l over time t:
N =  No  exp (-lt)
Then:  ½d N/dt ½  = No  l exp (-lt)= R
Where  R is the decay rate, i.e. R = Ro  exp (-lt)
And:  Ro  = No  l is the decay rate at time t = 0.
The half-life is the time for half of the original (No ) atoms to disintegrate or when the point is reached such that: 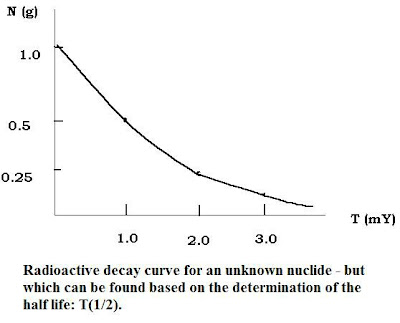 Fig. 5: Radioactive Decay for a radionuclide with time T in millions of years (mY)
It is easy to see from the graph shown that the half-life of this nuclide is about 1 million years, so: T½ =  106 yrs.
The problem of dating radioactive fossils or other specimens  (e.g. the cloth of ) is really a problem of finding a radioactive isotope that is most appropriate, or one that enables the maximum accuracy for the time scale desired.  Hence, for ancient fossils one would look for isotopes that have half-lives in the millions rather than thousands of years. Failing that one would wish to have available some kind of correction method, say to correct for extraneous effects such as the atmosphere might ipose on samples.
In many ordinary fossil dating applications, potassium-argon methods are employed, based on the relative compositions of Potassium -40 to Argon-40 gas. Typically when rocks or other items are tested the sample is split between the Potassium-40 content on the one hand and the Argon on the other. The instrument of choice to assess the ratio: K40/Ar 40 is the mass spectrometer.
Exotic isotopes of carbon can also be used is the measurement technique is sufficiently refined. In a recent use of the isotope d 13C, for instance, evidence has been found for the existence of life on Earth at least 3,850 million years ago. For this purpose, quartz (zircon, zirconium) crystals have been found to be of use since they may harbor small amounts of thorium and uranium at the level of parts per billion.
For dating samples in the millions of years, particularly for igneous rocks and samples embedded within, isotopes of lead and strontium may be used – being the ‘daughters’ from millions of years of radioactive decay.
Now, we examine another application of the G-M tube is to find the half-life of a particular source or the activity (decay rate) - say at a place.


A Geiger-Muller tube measures the background count at a given place to be 20/min. Over a period of time, the readings shown in the two row table below are then obtained after an unknown source is placed at the location.

Obtain the corrected counts, determine the half -Life (T½) of the unknown source, and find the decay constant.

1) Sketch the radioactive decay curve for the practical problem above and confirm that the half life is 6 hrs.


3)  Find the half life of the beta particle emitting nuclide: