Absolutist Ethics Needs to be Replaced by Provisional Ethics

If you ask too many ethicists about fundamental rules for their ethics, at the top they usually list "reverence for all life" without qualification.  But obviously, a glance at the real world shows that such a prescription isn't being practiced anywhere. Even the U.S., which has more religious believers than any other advanced industrial nation executes more convicted killers than just about any place except China, Iran and Russia.  Can you have "reverence for life" when you're offing killers? Oh yes, this constitutes an exception! He was a killer, after all! Yeah, well now so are you!

Wars, especially those of the choice variety like Vietnam and Iraq are similar, and in  fact they scraped the bottom of the moral-ethical barrel because so many innocents were slaughtered as well - such as at My Lai, e.g. 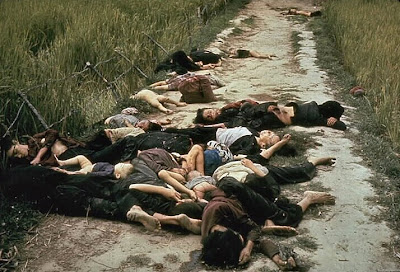 There, Lt. William Calley and his troop of "following orders" butchers killed 507 innocents including 173 children and 76 infants. Calley alone murdered 102 in all. And what was the response in the aftermath? Hell, 100,000 letters a day from birdbrain, morally bankrupt 'Muricans poured into the White House praising Calley and his butchers. Some daft morons even concocted a stupid song entitled "'The Battle Hymn of Lieutenant William Calley' which sold a million copies in one week, if you can believe it. So it appears the much vaunted "reverence for life" went right out the damned window so long as that life was only comprised of "gooks".

The next thing is, adherence to absolutist ethics and morality is causing thousands to die each year for no good reason other than some abstract notion of a "higher good" or misplaced "reverence for life'. A classic illustration recently noted in the New York Times is the case of those needing kidney transplants.  Currently, something like ten times more people need kidney transplants than the number of available kidneys. The result is thousands of unnecessary deaths each year which could have been prevented if we permitted kidney purchase markets like in Iran. There are no "waiting lists" or deaths in Iran at all from kidney failure (due to lack of transplants), as the Times observed.

But oh no! Our hifalutin' morality based on squeamishness prohibits the selling or trading of organs from human donors. (Never mind the medical -industrial complex is making gazillions each year harvesting organs - including eyes, skin - from deceased organ donors for whatever purposes it wants.)  What is so funny and hypocritical here is how the Neoliberal capitalists continually preach the benefits of markets über alles but won't allow them for organs. (And when I say "allow", I mean regulated markets - such as for pot here in Colo.)

Then there is the ISIS bunch, which just recently beheaded journalist James Foley in a despicable video. Do these vermin have a right to life? FUCK NO! As I said in an earlier blog post, they are the perfect candidates for the designated use of a nerve gas like sarin. Wipe 'em all out like roaches, fuck any "reverence for life" for these assholes. Of course, when I broached this to wifey, with her fine sensibilities, she was horrified: "That's horrible! You can't use that on them! You sound like your brothers!"  Really?

Well, I'm not exactly  fond of being compared with two hardcore conservos, but in this case, well....it's true (assuming they do agree that sarin is the solution to ISIS).  But again, WHY NOT? Because our "American values" preclude such action because then "we'd be like Saddam". So what? If it's effective in eliminating the scum ISIS rabble we DO it! And as I will show, there are no special "American values" unless they can be translated into positive actions to save the innocent!

"The ends never justifies the means"? We had no problem with that ethical principle when we dropped those A-bombs on Hiroshima and Nagasaki 70 years ago. We certainly believed the ends:  saving thousands of American lives, justified the means - A -Bombs. So why not similarly accept  that the ends: eliminating the ISIS refuse, justifies the means: Sarin?  How are bodies having eyes popping out in bubbles and skin burned off to reveal skeletons any different from convulsions, bubbles frothing the mouth and jerking a bit before croaking? I don't get it, but maybe it's just me. They're just as dead in either case, so what's the big deal?  Besides, at least with a sarin attack on ISIS we're going after REAL bad guys, not innocent civilians as with the A-bombs dropped on two Japanese population centers! (Even Bill Maher  - treading over the edge of political incorrectness on one of his 'Real Time' shows, asked why it's any different shooting a guy than to gas him, say in an execution. He's just as dead, one way or the other.)

The point is that eliminating the ISIS bugs would preserve tens of thousands of lives just like allowing a market for kidneys would.

Kai Neilsson describes examples of provisional ethics in his brilliant Ethics Without God. As one extreme example he considers four spelunkers who are exploring a deep cave, 1,500' below the surface. A rock fall closes the cave at one end while one member - a very obese guy - has found himself trapped in the only other available opening. The group has two choices: all die of oxygen deprivation or find some means whereby most can escape.

Absolutist ethics rules that all must die rather than any one sacrifice his or her life for the benefit of the others. Provisional ethics, meanwhile, argues that the optimum outcome is for most of the party to survive- however that is achieved. In Neilsson's example, one of the spelunker's happens to have a small stick of dynamite and a match and inserts it into the obese guy's boot to detonate him - thereby opening the only available path so the remaining three can escape. Yes, there's a risk of another cave in, but it's the only shot the group has and it works, since all more prosaic efforts to dislodge the obese man were for naught.

In the same way we beheld a real world application of provisional ethics in the case of a nun doctor who was summarily excommunicated from the RC Church 2 years ago because she saved a pregnant mom and permitted her fetus to die. The issue was that the mom's blood pressure was increasing malignantly and would have surely killed her if she'd been forced into labor. The nun had two choices: save the fetus and let the mom die, or spare the mom and let the fetus die (without any birth). The nun reasoned the fetus was nascent human life but the mom was full fledged human life- manifested as an autonomous thinking and fully conscious person. Therefore, the mom had the greater claim to life. Meanwhile, absolutist ethics would have argued that an effort to save both ought to have been made, despite the fact that medically both would have died.

Now it is also important to note that adopting a provisionalist ethics doesn't mean "anything goes". Two examples here:

1) Abortion: According to ethical provisionalism, abortion cannot be ethical in ALL circumstances for all conditions. Thus, since research has found that fetal brain waves appear past 6 months, NO abortions should normally be allowed in the third trimester. The only (provisional) exceptions would be: a) the health of the mother (e.g. if she were to have the child she'd die), or b) case of incest or rape - wherein having the child would create extreme mental trauma for the victim. (By that I mean possible psychosis or severe depression, including attempted suicide).

2) War: In the judicious application of moral provisionalism, NO war would be permitted to be launched by the U.S.A. unless an actual DECLARATION of WAR by congress is made. This would give congress the opportunity to exercise its constitutional rights, and impart moral and ethical authority in rendering a war truly just. In this light, we'd have no more Vietnams, Iraqs, Afghanistans or other adventures finagled outside the parameters of congressional validation. For too long wars have been waged “through the back door” at great financial and moral cost to the U.S. - which inflicts a disproportionate injustice.

This will also have another effect, in reclaiming the separation of powers! Given how congress has abdicated its war making powers over the past 50 years or so, it's little wonder the executive is so powerful now. Conservatives who rail against excess executive power (as in the case of Obama) should therefore welcome a return to congressional declaration of war as opposed to going along with assorted executive-driven,  fig leaf  "resolutions" (like the Tonkin Gulf Resolution for Vietnam, and the Iraq War Resolution under Dumbya Bush.)

If they argue against formal declarations of war, they can't be taken seriously in any other complaints to do with Presidents (especially Democrats) usurping their congressional authority, say via executive actions. If they abdicate it for wars, they merit no authority for immigration, health care or anything else. None! They've demonstrated that they don't wish to circumscribe executive power! (Of course, one reason for not authorizing declarations of war is cowardice. Congress, for the past 50 years, has been made up of too many yellow bellies who don't wish to have any votes for war in the congressional record. Let the Prez take the blame! But, an abdication of power is still an abdication and it means they can't complain in other spheres just because they're too cowardly in one!

It is clear that we need to alter our ethical perceptions ASAP because changing conditions in the world won't wait. Retaining an absolutist ethics, which is both irrational and unsustainable (especially after Peak Oil hits) is a losing wicket.