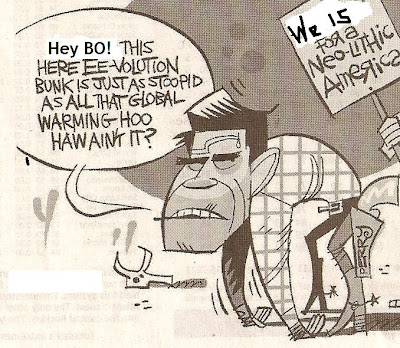 I am sick and tired of the pussified, wussified Neoliberal Democrats like former Obama advisor David Axelrod,  who have in large measure been responsible for gutting the party and driving many of us away to become independents. For example,  they fail to see or perceive constitutional rights, e.g. Axelrod unhesitatingly came down on Snowden for his revelations - while also now being willing to allow the likes of Texas cornpone Guv Rick Perry to escape accountability. Axelrod recently tweeted that the Texas Democrats ought to leave this jackass alone and not pursue a Grand Jury investigation. The modus operandi of the Neolib Democrats: Go after the good guys and tar them, leave the bad guys alone!

Why should we leave Perry to his devices? The documents show Perry violated state law by having funding removed, to the tune of $7.5 million, from the Public Integrity Unit in Austin. This was done after a DA in heavily Democratic Travis County (with Austin the state capital) was jailed after a drunk driving incident. Perry, just like Dumbya before him, then let the power go to his head and said if the DA didn't resign (so he could install a Gooper) he would veto funding for the unit - clearly a case of political extortion if ever there was one. The DA, of course, realizing what was at stake refused, and Perry make good on his vile threat.

As one of the prosecutors noted this morning (CBS Early Show), this  Public Integrity Unit is the only oversight branch in the state with any potential to keep the renegades like Perry in line. Renegades and cornpones who'd just love to do whatever they hell they want. For example, as has been reported (Denver Post, Aug. 20, p. 18A) at the time Perry carried out his threat the unit was investigating a cancer research institute that was one of Perry's pet projects. (One of its high ranking officials now faces a felony corruption charges. If the Dem DA had been stupid enough to step down, Perry would have replaced her with a pawn who'd have quashed the investigation.)


Further, this knuckle-dragging imp would have made sure no Texas liberal ever got into such a powerful  oversight office again.

Perry, after being indicted, snarked to Fox News:

"This isn't America! We don't use indictments to settle our issues!"

Uh, you need to look up 'Richard Nixon', bozo!  Hell, there are probably any number of other indictments can be made on this turkey to derail his obvious presidential aspirations. (We need another Texas cornpone fool  for President like we need an Ebola outbreak). What else to nail him on to derail his White House bid?

The Dallas Morning News  reported in October, 2011  that more than $16 million of Perry's special fund had gone to companies with substantial links to some of Perry's campaign backers. Meanwhile, "one $4.5 million grant went to an Austin pharmaceutical start-up founded by David Nance who's donated more than $75,000 to the Governor since 2001" (ibid.).

If Texas is any example, one can just imagine the nonstop shenanigans if this guy were to somehow get elected to the Presidency! "Teapot Dome Scandal II" anyone?

One would have thought that two Texans in office would have been at least enough to last a hundred years. But maybe Americans are so taken in by swagger, drawl and brash talk that they would succumb to this dolt. If they do, we can really say 'hasta la vista' to what's left of this country! "Third World America" won't merely be a distant fear but an immediate reality, as Perry plots to make the entire U.S. look like Texas.

All the more reason to ensure a full grand jury investigation and to torch his 2016 plans like Chris Christie's have been.  Plus, let's not forget how Perry made a lot of threatening remarks about then Fed Chairman Ben Bernanke two years ago. (But then American memories are fairly short).

"If this guy prints more money between now and the election. I don’t know what y'all would do to him in Iowa, but we would treat him pretty ugly down in Texas. Printing more money to play politics at this particular time in American history is almost treacherous, or treasonous in my opinion."

Treasonous in Texas? Hmmmm.....what does that bring to mind? Well, the thousands of 'Wanted for Treason' posters going up on nearly every telephone pole and bldg. in Big D, on the morning of Nov, 22, 1963, e.g. 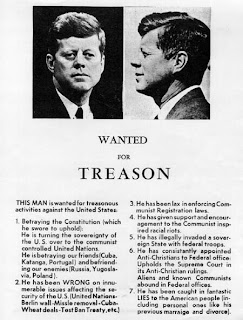 Barely four hours later, Kennedy was shot dead. He took a round to the throat, one to the upper back, and a dum-dum to the head - which exploded inside his skull, sending brain matter spewing out back across the limo. (Jackie desperately lunged across the limo trunk to try to retrieve the expelled skull fragment )

We also know that Perry, from his comments in 2011-12, is a died-in the wool Confederate sympathizer and Secessionist so has no respect for law and order.

Indeed, this man doesn't even know that the 10th amendment to the Constitution is not a carte blanche to have states' rights. It specifically refers to powers (and as Alexander Hamilton elaborated, 'prerogatives') not to rights!


"The Ninth Amendment talks of 'rights enumerated' and says 'the people' retain unenumerated ones. The rights in the Ninth are not the rights of the state, which can- strictly speaking - have no rights.

That Perry doesn't know any of this, and even - in one Reepo debate- was unable to name even three government agencies - shows he is unqualified for the highest office in the land.

The indictment now, and the Grand Jury process, is then an excellent means to ensure Perry doesn't get close to any election possibility.

Since this is the case, we cannot allow Perry's previous words or actions to slide here, or try to softsoap them away - as David Axelrod attempted  to do.
Posted by Copernicus at 7:04 AM