An Introduction to Quantum Mechanics (1)

1. The Wave Model of the Atom.

Though useful, especially in terms of identifying spectral lines, Bohr’s model had its limitations. For example, it couldn’t account for how angular momentum is conserved in atoms, nor how electronic transitions originate. More seriously, it wasn’t able to deal with the problem of lost energy and why atoms don’t simply collapse.


Consider the following dynamical picture:  as the electrons whir about the nucleus they ought to be losing energy, in the context of Bohr’s orbital model. If they lose kinetic energy over time they must spiral into the nucleus, and the atom then ceases to exist. This ought to happen in a very short time, so that most atoms in the universe cease to exist and hence the whole universe. But this isn’t observed. Why?


The only explanation is that Bohr’s orbital model can’t be correct.  Thus was born the theoretical basis for the wave model which we mostly accept today in modern quantum mechanics.  Unlike the Bohr model, electrons don’t follow defined orbital paths but instead are referenced to regions or volumes in which they will be more or less probable.  The basic allocation of electrons, say for the hydrogen atom, is then confined to “orbitals” or regions of higher probability.


We now look at the experimental basis provided for this model.


Around 1926, a young French physicist named Louis de Broglie actually postulated the basis for material particles, such as electrons, acting as waves.  This was experimentally verified in the (1927) Davisson and Germer electron diffraction experiment sketched below:


From the experiment, with electrons moving through a potential difference V = 4,000 volts, the kinetic energy gained should be equal to the work done, or:


The velocity then is:


And the de Broglie wavelength is:


Which is the de Broglie wavelength of the electron in this experiment.


A first step to uncovering the wave model from Bohr’s is to examine his quantized relationship:


where L is the angular momentum.  Re-arranging:


Showing the circumference is scaled into n (standing) waves of wavelength lD   as shown below:


This wave-orbiting electron atom still has a radius r,  but with waves each separated by one de Broglie wavelength , lD.


Thereby  an integral number of such wavelengths form the circumference of the atomic orbit, as required by  the condition:  2p r =  n lD.


For example, in the case of hydrogen the first three of these cloud-wave regions are shown in Fig. 3.


Let us ‘zoom in’ on the more spherical n= 1 configuration, and the probability for the electron in this space as depicted in Fig. 4 below:


This diagram more than any other dispenses with the notion that hydrogen electron occupies a definite position. Instead, it’s confined someplace within a “cloud” or probability space (b) but that probability can be computed as a function of the Bohr radius (ao = 0.0529 nm).  The probability P1s for the 1s orbital is itself a result of squaring the “wave function” for the orbital.  If the wave function is defined y (1s) = 1/Öp (Z/ ao) exp (-Zr/ ao), and the probability function is expressed:


Where y (1s) * is the complex conjugate, then the graph shown in Fig. 4 is obtained. Inspection shows the probability of finding the electron at the Bohr radius is the greatest, but it can also be found at distances less than or greater than  0.0529 nm.


We thereby see from Figs. 3-4 that Bohr’s original quantizing number, n (the "principal quantum number"), has far more meaning than simply to parse the number of standing waves for a given atom. We already see that it determines the energy of the atom, viz.

But it also indicates the average distance of the electron from the nucleus.  Thus, de Broglie’s wavelength provides the basis for the wave-particle duality that lies at the basis of the “smeared” probabilistic atoms peculiar to modern atomic theory.

There are two physical meanings attendant on n: i) it determines the energy of an orbital (specifically in the H-atom), and (ii) it indicates the average distance of an electron in a particular orbital, to the nucleus, To fix ideas, I show in the accompanying diagram (Fig. 5)  a sketch of one lobe for an electron orbital associated with the (3, 2, +2) state in the Hydrogen atom. The key point is the orbital denotes an electron density associated with a probability of finding the electron in some defined space. 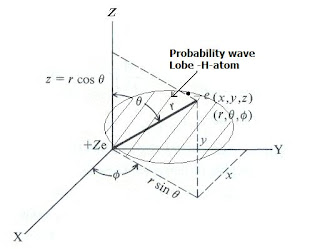 
In the case shown one must also visualize a symmetrical lobe on the other side (making the whole orbital resemble a dumbbell) to make it complete. As one alters the set of quantum numbers the electron densities change and so do the probabilities associated with the orbit.(See Fig.6)


Describing orbitals using the set of given quantum numbers means knowing the numbering rules applied to each. In the case of the principal quantum number, n, we allow it to have integral (non-zero) values: 1, 2, 3, 4 etc.


There is no special significance to the letters (apart from the physical meaning we already gave for the angular momentum quantum number, ℓ, and they are mainly of historical import- though still retained, for example, in chemistry. (By extension, one also often hears the term "atomic shell" used in chemistry). A collection of orbitals under the same value of n is called a "shell". Thus, for n = 4, we have ℓ =0, ℓ = 1, ℓ =2, ℓ = 3 so comprising the collection of orbitals: s, p, d and f.

Note the above set of m ℓ numbers is given as a SERIES, e.g. starting with (-ℓ) and terminating at + ℓ. Look at the simplest example for ℓ = 0, then:


As a general rule then, we can use the formula:


to give the total number of m ℓ   numbers.


In any problems to do with identifying electron shell structure- configuration, it is well to bear in mind the Pauli Exclusion Principle to make sure the electrons are distributed so that no two electrons have the same set of quantum numbers. It is instructive to study the table below to see how the principal quantum number, n, changes with ℓ, and the subshell as well as the symbol for the primary electron shell.  The  Table shown below shows the respective Shell and Subshell Symbols and associated Quantum Numbers.

In working out assorted problems, preparation of a schematic energy level diagram associated with the state of the system can also be of immense value.

(1) Find the de Broglie wavelength  lD  of a proton subject to 4000 V in a Davisson-Germer type experiment.