What Happened to Nate Silver? Why Let A Climate Denier Occupy Space On His Blog?

No, "free speech" isn't the issue!  If a massive terrorist  'dirty' bomb was about to go off - say in Manhattan- we would not applaud those who deliberately gave misinformation, offered denial or other deflections. We'd prosecute them at least for obstruction of justice if not treason. A similar analogy can be invoked for radical climate change denial, now demanding a response  more urgent than ever as we learn (from a leaked IPCC report) that Climate change has already left its mark "on all continents and across the oceans", damaging food crops, spreading disease, and melting glaciers.

According to a UK Guardian Report, e.g.

"Some parts of the world could soon be at a tipping point.  For others, that tipping point has already arrived. "Both warm water coral reef and Arctic ecosystems are already experiencing irreversible regime shifts," the approved version of the report will say."

"The gravest of those risks was to people in low-lying coastal areas and on small islands, because of storm surges, coastal flooding and sea-level rise."

This is already being seen in islands like Barbados, where the increasing sea level is reclaiming ever more prime beach land. It's also at work in South Florida, steadily shrinking beach sand unless it's constantly replaced. But tourists sunning themselves on beaches is the least of our concerns. The biggest is catastrophic climate change leading to the runaway greenhouse effect.

NY Times' columnist Nicholas Kristoff,  several weeks ago, noted a contest he'd held for the "Neglected Topic" winner among his columns. By a large margin it was climate change with one person comparing it to "staring down an asteroid". This is not exaggeration, other in terms of the time scale. If we fail to act decisively and dramatically our species will experience as much devastation as if a Torino scale 9 asteroid had hit. What are we doing about it?  Nothing of substance! Even Kristoff admitted:

"We in the news media manage to cover weather very aggressively but we are reticent on climate."

He adds that the coverage of climate has actually declined in American media since 2007 - according to researchers at the University of Colorado. As this media attention factor has declined, so also have the proportion of Americans who accept global warming is real. Of course, the largest divergence is between Republicans (24% accept it) and Democrats (65%).

Into this milieu, statistics guru Nate Silver has entered with his revived 538 blog, now incorporating a climate science section. Unfortunately, Silver picked exactly the wrong person to be the central contributor - a denier named Roger Pielke Jr. who - truth be told - isn't even a climate scientist.   According to one profile on Wikipedia:

"Pielke Jr. is an American meteorologist with interests in climate variability and climate change",

1- Given their familiarity with the defects in their own extended predictions, meteorologists looking at long range climate questions (such as global warming effects) are predisposed to “see a system doomed to terminal unpredictability”.

2- Most skeptic meterologists (like Bob Breck an AMS-certified chief meteorologist at New Orleans WVUE) didn’t properly recognize the limits of their own scientific training – and hence the implausibility of their pronouncing on climate science.

3- Because of (2) the skeptic meteorologists tend to see their own “informed intuition” as the source of some kind of ersatz scientific authority – particularly if the skeptics are also excellent communicators, or fancy themselves so.

Some of the paradoxical statistics that were cited in the article, based on surveys carried out by Emory University Journalism lecturer Kris Wilson, included:

-Only 24% believed that humans were responsible for most of the change over the past half century.

- 50% were certain this wasn’t true and that humans weren’t responsible.

-Only 17% of the opinionated TV weathermen “received a graduate degree, a prerequisite for an academic researcher in any scientific field”.


If nothing else, this ought to forewarn any person who purports to have a blog featuring climate change topics to look before leaping and choosing an obfuscator like Pielke Jr. But don't take my word for it.


As one reviewer of his book  The Climate Fix: What Scientists and Politicians Won't Tell You About Global Warming,  puts it:


"Pielke Jr. is really astonishing in the way he almost completely denies the urgent need to mitigate climate change by greatly lowering global carbon emissions. He does it in a very slick way by masquerading as someone with real and different solutions, when in reality all he proposes is that society do next to nothing about burning fossil fuels.

He basically brushes aside climate change as if it were a trivial concern. His proposal is to tax carbon at such a low and inconsequential rate that even Exxon Mobile agrees to the tax, and then to use the proceeds to fund more research on alternative energy and other mitigation strategies. That's IT. Well almost.

He also spends an inordinate amount of time bashing climate scientists (which he is admittedly not) for being human beings and voicing their intense concern for the future of the planet, which their research has shown is in big trouble if we do nothing or little to decrease carbon emissions in the very near future. This book is not worth reading and I regret the time I spent getting through it. If you want to learn about climate change and our options for dealing with its consequences, there are dozens of other books that really address the issue.”

Why didn't Nate Silver know this before hiring the guy for input on his 538 blog? Perhaps he believed Pielke Jr was a climate  "moderate" and he'd be less likely to be criticized if he chose a "middle ground" guy as opposed to say Michael Mann (associated with the specious nonsense called "climategate" see e.g.
http://brane-space.blogspot.com/2011/11/climategate-20-or-more-pseudo-climate.html
The reviewer's  isn't an exceptional take, but conforms with what most serious climate researchers think of Pielke and his work.  Skeptic Science refers to Pielke Jr as a “classic misinformer” and gives examples.
For example, Pielke Jr. claimed:
"Not all glaciers and ice caps are melting. While the Arctic Ice for example has been decreasing, Antarctic ice has not"
But this is refuted by Skeptic Science here:Arctic sea ice loss is three times greater than Antarctic sea ice gain.
I also dispatched this nonsense in my own blog post here:
http://brane-space.blogspot.com/2012/09/brainiac-goops-screw-it-up-again-on.html


To see a comprehensive rebuttal by Skeptic Science of many other of Pielke Jr. claims - go to this link:
http://www.skepticalscience.com/fivethirtyeight-pielke-downplay-climate-damages.html
One remarkable feature of Pielke Jr.’s discussion is its shrillness. “Clique,” “coup,” and “plotting” are the kinds of terms usually reserved for organized crime syndicates, terrorist organizations, and other conspiracies against the public good. The repeated use of the word “activist” mobilizes a characteristic trope of right-wing ideologues. The term is typically applied to judges, who like scientists are supposed to be neutral when carrying out their duties, but all too often, on this view, betray their professional responsibilities.


Even someone who is sympathetic to the claim that political considerations sometimes find their way into climate science might shrink from Pielke Jr.’s characterization of climate science as “a fully politicized enterprise.” He makes such institutions as the for Atmospheric Research sound like an outpost of the Democratic National Committee, or perhaps something even worse.

What is most troubling about Pielke Jr.’s account is its lack of balance. As we will see, the politicization of science by a handful of climate change deniers and their patrons is extremely well documented, and continues to be a major obstacle to the adopting effective climate policy. Yet in a 26-page chapter on the politicization of science, Pielke Jr. devotes only one paragraph to the behavior of those “opposed to action on climate change.” Their worst offense seems to be “[blowing] out of proportion papers at odds with the views of most other scientists.” If only.


"Trained as a political scientist, Pielke is an ornery, combative smart-aleck who claims to accept the facts of man-made climate change, but spends much of his time debunking new climate research, downplaying the threats and ridiculing scientists who disagree. He expends so much energy belittling climate experts — he recently accused White House science adviser John Holdren of “zombie science” — that he was listed in Foreign Policy’s 2010 Guide to Climate Skeptics. (The rest of his time seems to be spent crying foul when his victims hit back.)"


The Daily Forward goes on to note:


"Critics from columnist Paul Krugman to leading climatologist Michael Mann to liberal bloggers at ThinkProgress and Salon all claim Silver hurt his website’s credibility — fatally, some huffed — by hiring a “climate confusionist” like Pielke"


Actually, Pielke Jr is your standard "agnotologist" - one of a species of right wing types who sow deliberate  doubt to postpone critical action on climate, in favor of economic priority. It's exemplified in this 2012 headline and story in the Wall Street Journal: 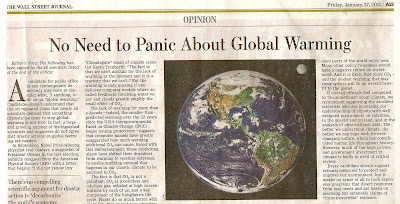 Agnotology, derived from the Greek 'agnosis' - the study of culturally constructed ignorance- is achieved primarily by sowing the teeniest nugget of doubt in whatever claim is made.   Stanford historian of science Robert Proctor has correctly tied it to the trend of skeptic science sown deliberately and for political or economic ends . In other words, the supporters of agnotology - whoever they may be- are all committed to one end: destroying the science to enable economic profit and hence planetary ruin. Proctor also notes these special interests are often paid handsomely to sow immense confusion on the issue.
The concept is simple: sow enough doubt, portray denial as a "logical" counterpoint to acceptance, and you win. The Neoliberal media then presents both sides - and hails it as evidence of their "objectivity".  As Nicholas Krisfoff pointed out this cynical trend is already paying dividends as the media retreats from the issue, and Americans follow as fewer accept it as real. Would they do the same if a mammoth asteroid approached? I doubt it, but then human brains simply don't process slow moving catastrophes in the same way.
The question remains of why Nate Silver would help spread agnotology, and my answer is simple: He himself simply isn't adequately educated on climate change. In many ways it reminds me of SPLC Intelligence Report writer Marilyn Elias, who did a piece on the JFK assassination  (actually on Richard Belzer) for the Winter issue and got it all wrong. Why? Because she let disinformationist Gerald Posner do her thinking for her as opposed to performing her own independent investigation - for example of Jack Ruby's role in the assassination of Oswald.
If Silver has learned his lesson, then all the hullaballo may be worth it. In the meantime, bloggers and scientists need to follow the advice of real climate scientist Michael Mann ('If You See Something, Say Something', Sunday Review, NY Times) as he warns:
"If scientists choose not to engage in the public debate, we leave a vacuum that will be filled by those whose agenda is one of short term self-interest. There is a great cost to society if scientists fail to participate in the larger conversation - if we do not do all we can to ensure the policy debate is informed by an honest assessment of the risks. In fact it would be an abrogation of our responsibility if we remained quiet in the face of such a grave threat."
And as the new IPCC report notes, this is a grave threat indeed. Those like Pielke Jr. drive the impetus to shut us up invoking the nonsense we are "politicizing science" but in reality, when a risk as grave as the runaway greenhouse is around the corner - politics itself is subsumed by science. Since politics' role is first and foremost the disposition of resources via governance, than it redounds on us to ensure science has a predominant role if a scientifically disclosed threat warrants it.
Let us hope Nate Silver has learned from this so he uses more discretion in the future in choosing his fellow  538 bloggers.
See also:

Posted by Copernicus at 9:20 AM