Losing in the Stock Market? Blame the Flash Traders for Wall Street Being RIGGED! 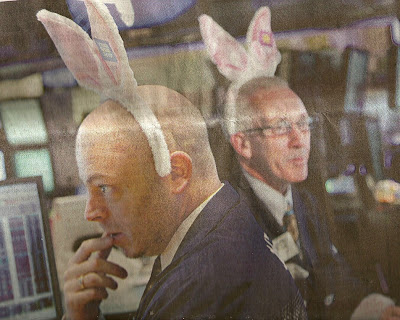 High frequency traders plan their next move - to see the 'buy' orders of millions a fraction of a second before they can be placed.

Author Michael Lewis ('Flash Boys') described in detail this morning (CBS Early Show) how flash traders- using the high frequency trading (HFT) gambit are able to see milliseconds ahead of your buy orders to get there before you can, buy the stock and raise the price - so you don't come out as far ahead as you thought. Also, the same applies to sell orders. They can get there first, and you get much less than you originally thought you would.

Lewis, who originally appeared on '60 Minutes' last night, emphasized the flash traders often trade on fractional share values but these pile up. Billions can be made off the backs of poor ordinary suckers, who trust that when they place buy or sell orders no shenanigans or secret advantages are afoot. But alas, this isn't the case. It only takes a tiny fraction of a second of flash trader advantage for them to see slightly ahead - to what you're intention is - and doing it before you do.

Incredibly, none of this seems to be illegal,  though New York AG Eric Schneiderman said this morning (on the same Early Show) that:

Which means that in the meantime the ordinary investor is a sitting duck, at the mercy of these high frequency traders and their flash trade computer algorithms.

Readers may recall HFT first came to light in the May 6, 2010  “flash crash” of over 500 points. This event brutally demonstrated the perils of so –called “flash trading”. Then we first learned of the high speed computers which use special algorithms to detect large buy and sell orders then adjust their trades to take advantage. Since the high speed computers can act in nanoseconds( to either buy or sell) with the flash information, they inevitably get the better of the more conventional (slower) investors. The “flash crash” likely occurred because a number of flash computers processed information too quickly or inaccurately inciting a mass sell off.

What’s the little guy investor to do? Not much, and as I’ve repeatedly stated before, no little guys belong in the Wall Street scene, especially if they have lots of money (say in 401ks or IRAs) they are depending on for retirement. The reason is not just flash trading but many other gimmicks, including market timing, mutual fund or stock hyping, and misrepresentations, e.g. of "5 year annualized returns".

For example, the 5 -year annualized return (without dividends) at the end of 2012 showed negative 0.6 percent. But at the end of 2013 it showed 15.4 percent, and you'd have been kicking yourself for not being in the market. But hold strain! The reason for the difference is that for the latter 5- year stats the dismal 2008 stats were entirely wiped off the books from the standpoint of the "five year return", especially the S&P 38.5 percent drop without dividends.

How influential is flash or high frequency trading? According to The Wall Street Journal (‘Fast Traders Face Off with Big Investors over ‘Gaming’, June 30, 2010, p. C1) it accounted for two-thirds of total stock market volume. All other things being equal, that meant unless one had access to a flash trade system or algorithm himself, he had a 2 in 3 chance of being victimized by flash trades, if even peripherally. Today, some four years later, that HFT volume exceeds  90% and the little guy is in a perilous position unless he also has access to such trades. In most cases, as AG Schneiderman observes, it is large institutional investors who use them to gain advantage for their members.

Let’s look at one example of how HFT works. Say a flash trade system or firm, using its high frequency computer, detects a large buy order for a stock listed initially at $20 a share. Then - with milliseconds advantage - the flash trade firm will immediately begin scarfing up the stock – driving up the share price – say to $25 or $30 a share or more before you can buy it. The large (institutional) investors then buy it at the lower price, and the flash firm makes a killing,  while the ordinary  "Joe Schmoe"  loses out, paying more.

Bear in mind here 401ks are typically invested in mutual funds comprised of a body of stocks, maybe ten or so. The flash traders’ capability with their high speed system is such that it can control the numbers for all the stocks of a particular fund, though true, there are some funds (e.g. Vanguard Group) which offset some of the effects by systematically lowering trading costs. This is often done by narrowing the spread between what investors pay to buy and sell shares.

Other funds don’t fare as well since the flash traders’ systems “front run” them. Thus, a stock’s orders (or many stocks in a fund) get “picked off” by the flash traders’ computers that detect the orders, then adjust to benefit. This may well be why mutual funds are being decimated as reported in MONEY magazine ('Mutual Funds Gone Down the Drain', March, p. 19).  According to the piece, citing a Morningstar report: "of all the traditional funds operating a decade ago, 4 in 10 shut down before 2014."

Why should you care? As the article notes:

"Even though you can cash out, costs rise and performance falls as the end nears."

This is all the more reason flash trading needs to be brought under control. Readers who seek to lean more should get hold of Michael Lewis' book, 'Flash Boys'.