Michio Kaku's "Model of Mind" is Too Simplistic, Reductionist 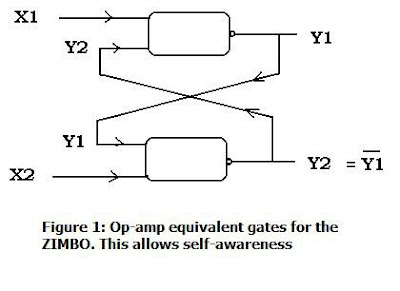 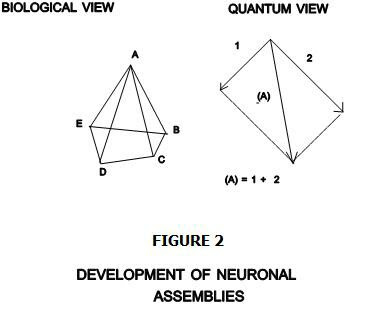 I suppose it was too much to expect that the author of Quantum Field Theory (Oxford Univ. Press, 1993) would be able in any way to discern that 'mind' can't simply be reduced to deterministic parameters, but there it is. In Michio Kaku's new book, The Future of Mind, he makes the same mistake I did with my first book, 'The Atheist's Handbook to Modern Materialism'.  by predicating distinct levels of self-awareness (consciousness) on the numerical number of discrete 'feedback loops'.   The ideal sort of component, to add to those for the basic Turing machine, would be something including internal and external feedback. That is, combine sensory (external) information, with various data and internal information and then process it to provide appropriate responses.


From my own book, I show one such possible component to achieve this capacity- known as an ‘XOR’ or exclusive –OR gate. And, we’d need a lot of these in tandem, just as we would numerous switching components.  The key point is that each combined output, be it X1Y1 or X2Y2 is fed back as a novel input. (Note that Y2 is designated as the complementary value of whatever Y1 is). We assume here that one output, say X1, arises from internal data already stored while X2 arises from some mix of outside data and other internal data kept in hidden registers somewhere. (Which could be likened to a human’s ‘subconscious’). In each case, outputs are produced that are fed back into the system providing it with the capability of self-recursiveness and a degree of self-regulation.

With enough of these operating in concert with appropriate switches etc. one might obtain the most basic human consciousness or 'Zimbo.'  While not at the fully conscious human level, there’s an amazing amount the ‘zimbo’ would be capable of, so it shouldn’t be dismissed too hastily. For example, a complex zimbo features a number of programs or sub-modules running concurrently. Consider a chess-playing module [C]. We identify the following essential sub-modules as integral it: foresight F(C) or the ability to see ahead some number of moves, M(C) mathematical-spatial recognition. Thus, for chess-playing: [C] = F(C) + M(C) at minimum. By extension if [H] is the total ‘program’ for a human zimbo, a number of sub-modules: P1, P2, P3 etc. can be assigned such that:

and which exhaust all possible forms of human behavior and cognitive manifestation. Thus, as a conglomerate of virtual programs the aggregate human is itself a ‘virtual machine’! By definition it is governed by one or more parallel processes (e.g. P1, P2) such that:

Here the processes P1 and P2 are hidden from scrutiny and represent transfers of data bits in the parallel architecture (between its ‘accumulators’ and ‘registers’, and manipulated by switching elements such as already described). These go up to some number of (N,M) parallel steps where N = M generally. The effect is recursive (feedback loop programmed in) so that the program has the capability to adjust to input parameters and alter the effect (output) accordingly.

Now, Kaku's basic claim is one can approach a practical model of 'mind' (taken as the software processing aspect of the "wetware" or brain) by simply adding more and more of these feedback loop components. At no stage does he remotely think this will only leave you with more sophisticate Zimbos, as opposed to actual self-aware humans.  No surprise this is the very sort of model a reductionist physicist would invoke and, incredibly, he finds it not at all ironic to posit a thermostat at one end of the 'scale of awareness' and humans at the highest. But, sadly - like me - he seized on a metaphor and took it for a model or mechanism of operation.

So where Kaku runs off the rails, as I did,   is in using this ridiculously simple reductionist metaphor to suggest human self-consciousness can result from an indefinitely large macro-assembly of logic elements.  But again, this is what a reductionist would do since he's trapped in a box of his own making, where his very dependence on component reality means he's unable to conceive of emergence.  It is actually emergence - contingent on the brain as a quantum mechanical entity - that leads to a full model of human consciousness.

As another reviewer of Kaku's book has pointed out: "Simulations are not a self, and information is not experience." (Sunday New York Times Book Review, 'Dreaming in Code')  . How is the breakthrough made, conceptually, to emergence? Physicist Henry Stapp has pointedly noted that uncertainty principle limitations applied to calcium ion capture near synapses shows they (calcium ions) must be represented by a probability function. (Stapp, Henry, P.: 1993, Mind, Matter and Quantum Mechanics, Springer-Verlag, p. 42.)

More specifically, the dimension of the associated calcium ion wavepacket scales many times larger than the calcium ion itself. This nullifies the use of classical trajectories or classical mechanics to trace the path of the ions.  It thereby opens the door to quantum mechanics.

My insight, elaborated fully in my new book, (Beyond Atheism, Beyond God)  is that if one replaces the mechanical logic gates  (for the simple feedback loop inputs-outputs)  with QM  "gates", i.e. based on Pauli spin operators, then the entry of novelty and emergence is enabled. For example, the NOT gate can be represented by what is called a unitary matrix, or Pauli spin matrix-operator σ_x = (0,1¦1,0) where the left pair is a matrix 'top' and each right pair a matrix 'bottom' - since they are usually written in a rectangular array form.

What is the advantage of doing this? Well, as I pointed out in my recent book, consciousness is elevated out of the strict machine-like model of an ordinary computer to one that can explain more features of the human experience, including the so-called "'qualia problem".  The qualia problem is often also called the Mary problem since it presents a hypothetical character (“Mary”) who inhabits a black and white world, but knows everything about colors in physics terms, i.e. 'yellow' corresponds to a wavelength of 5500 Angstroms, and 'red' to 7500 Angstroms etc.. Still, though she knows what color signifies, i.e. a particular wavelength in the electromagnetic spectrum – she has never experienced it.  The qualia problem helps to distinguish between what many call monistic physicalism and what I refer to as quantum physicalism. Monistic physicalism in its most rudimentary form can be summarized by Victor Stenger’s comment (cf. God and the Folly of Faith, 155) :

And the biggest contradiction to Stenger’s interpretation is (cf.  J.S Bell,: Foundations of Physics, (12,) .989 )

Although Y is a real field it does not show up immediately in the results of a ‘single measurement’, but only in the statistics of many such results. It is the de Broglie –Bohm variable X that shows up immediately each time.

From this one can deduce that Kaku - from his model of mind - is a monistic Materialist like Stenger. In this way he can blithely dismiss telepathy (Ch. 3 p. 63),  telekinesis Ch. 4 (p.80) and of course, quantum consciousness (p. 329) . One wonders, therefore, if he's read the work of Dr. Robert G. Jahn who showed how student participants in his lab at Princeton Univ. could (telekinetically) disturb random number generators on computers, as published in The Journal of Scientific Exploration. (Vol. 1, No. 1).

As NY Times' reviewer Adam Frank points out (ibid.): "he assumes that scientific accounts of consciousness must reduce to discussions of circuitry and programming alone. But there are other options. For those pursuing ideas of emergence, descriptions of lower level structures like neurons don't exhaust nature's creative potential."

But by applying QM the path to that creative potential is enabled and opened not foreclosed. (And bear in mind, Kaku's model devoid of QM is no more beyond the realm of conjecture than mine, or Henry Stapp's or David Bohm's!)  Thus as disclosed in the diagram (Fig. 2) one can illustrate the two types of concept to be interwoven: biological networks (left side) and an associated quantum vector superposition in terms of wavefunctions (right).

In the end, what is on offer from Kaku - like Stenger- is another form of Scientism.  Another physicist ahead of his time, Bernard d'Espagnat advises caution for all those who'd willy -nilly hitch their wheels of reality to it: (In Search of Reality, p. 56):


If scientism were correct, or more precisely, if the view of the world it proposes so forcefully, that of a world ultimately consisting of myriads of small localized objects merely endowed with quasi-local properties were correct, then such an evolution of our mentality would admittedly be excellent. It is always good for man to know the truth! But on the other hand, if the ultimate vision of the world which scientism proposes is false, if its conceptual bases are mistaken, then this development is – on the contrary –quite unfortunate.

He continues, matter of factly, noting that the presumptions of “common scientism” are false in his estimation, and he bases this not on subjective opinion but on specific scientific facts, e.g. the nonlocality disclosed in the (1983) Aspect experiment, and the existence of de Broglie waves as revealed by the Davisson -Germer experiment.. This is a conclusion with which I must concur. It is also a world view that offers a picture of humans beyond being "computers encased in meat".

"If we treat minds like meat computers, we may end up in a world where that's the only aspect of our nature we perceive or value"