Alan Weisman on 'Real Time': You Can't Be A Real Environmentalist & Not Back Population Control! 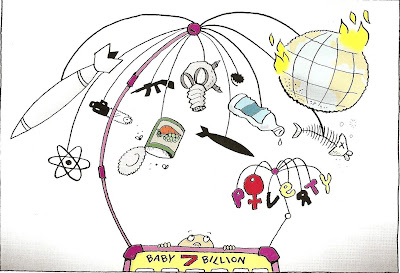 "From the instant we're born, even the humblest among us compounds the world's mounting problems by needing food, firewood, and a roof, for starters. Literally and figuratively, we're all exhaling CO2 and pushing other species over the edge."- Alan Weisman, in 'Countdown: Our Last, Best Hope for a Future on Earth'


I've said it many times before, but now will again: if you presume to be any kind of legitimate environmentalist, I don't care whether you're a member of the Sierra Club, the Wildlife Conservancy or PETA, then you must support strong family planning and population control!  The reason is as obvious as the nose on one's face: population growth is at the core of 90 percent of our environmental problems - from the greenhouse effect, to mounting air and water pollution to reduced food quality via overuse of GMO foods and nitrogen fertilizers.

This was brought out by Alan Weisman on HBO's Real Time Friday night, when he calmly dismissed a number of tropes, based on his new book, 'Countdown: Our Last, Best Hope for a Future on Earth?'.    Among them: that one can be a conscientious environmentalist and at the same time ignore population growth or the need for dramatic family planning. This would be roughly analogous to professing one is against war, but having mostly defense industry related funds in one's investment portfolio. It doesn't add up and betrays cognitive dissonance and philosophic inconsistency.  Another is that Iran must be "backward" in family planning terms, on account of being a Muslim country. But this is total nonsense and Weisman explained to Maher why Iran leads the world in family planning programs, see e.g.

"Carrying capacity" or the maximum number of people the Earth can support given its resource base, also came up for discussion.  This was highly relevant given that,  as Weisman explained, the human population is going in the wrong direction — adding 1 million more people to the planet every 41/2 days.  We are already using excess resources equivalent to 1.5 Earths, and if every manjack lived like we do in the U.S. we need five Earths! It's not just this century's projected growth to 11 billion that troubles Weisman, as he told Maher, he is also concerned about how the 7 billion of us already here are straining natural limits, from the buildup of heat-trapping gases in the atmosphere to the decline of available fresh water.

Even now, 1 billion people live in water-stressed conditions, meaning that renewable water supplies have dropped below 1,700 cubic meters per capita. One notable ‘State of the World’ report (2000, pp. 46-47), warned that the ever increasing water deficits will likely spark “water wars” by 2025. We are already seeing low level water wars emerge here in the mountain West, with fracking competing for scarce water in a severely drought prone region.

Maher asked Weisman what his best estimate would be for the Earth's maximum practical population  and he ruminated for a few minutes - examining the conditions if nitrogen fertilizers could no longer be used (given their devastating effects on the environment) and came up with 2 billion. This is a realistic number (others, e.g. Richard Heinberg (The Party's Over), estimate 3 billion), and Maher's response was predictable: "So wait, we have to kill 5 billion people?"

But the solution isn't our (humans) having to "kill" anyone. Isaac Asimov,  the noted science writer,  put it best in his public lecture at Queen's Park Theater in Barbados back in 1976,

He warned that humans had two choices: decrease their population willingly to the carrying capacity limit  (e.g. by aggressive family planning and removing perks for having children, i.e. tax credits in the U.S.) to live in an equilibrium with the Earth and its resources, or let nature “increase the human death rate” (e.g. by starvation, pestilence, wars over resources etc.). Indeed, the death rate can be exponentially expanded by nature merely from the point all antibiotics cease to work. With our overuse of them, including in food - by the meat industry, we are already approaching that point. It is totally conceivable then that half the world's population could be lost within a few years if all antibiotics ceased efficacy. Add to that the spread of water borne illness, say cholera, dysentery etc. from global warming, and one can easily see a population crash  - totally out of our control. (See also the information at www.dieoff.org )

In his lecture, to get Bajans to grasp the concept of carrying capacity, Asimov invoked "the bathroom metaphor". It definitely worked in getting people to understand the debilitating, disastrous effects of too many people. As Asimov noted, if two people live in an apartment, and it comes with two bathrooms, they have a comfortable life. Either one can use the bathroom anytime he or she wants, and can remain in there as long as they desire, even reading while doing business.

One can say, that for the purpose of "Bathroom freedom" - 2 is the carrying capacity for a two -person apartment. Now, let there be twenty people occupying the same apartment, and what happens? Bathroom freedom evaporates. Visits now must be regulated by the clock, and no one may stay in for too long. Indeed, a timetable likely has to be set up for each person's bathroom use. (Don't laugh too hard at the improbability of this example, since we now know of numerous cases where immigrants have been found crammed into such conditions - but usually in a house)

The point is, that the liberating use of the bathroom which applied for two persons, no longer applies with twenty, and probably evaporated by the time there were five or six occupants of the apartment. (And we won't even go into where each - unrelated- person sleeps, if there are only two bedrooms).

Such is the way overpopulation degrades the quality of living, and cheapens it for all, making it more discomfiting. "More" is definitely not merrier!

Only briefly touched on by Weisman, in his brief discourse on Iran's family planning, is the effect of excess population on jobs.   In the 1950s, unemployment rates  in the U.S. seldom hit 2% if that. A person could find work, good work, if he or she simply looked hard enough. In addition, bank savings account rates approached 5-6% so people could safely stash money away without putting it at risk, such as in the stock market.

Now, move 60-odd years into the future. The working population has more than doubled, but the rate of new job growth has remained at roughly half that. Even worse, because many of the better jobs have now shipped overseas, thanks to NAFTA, etc. where workers can be paid at half the rate and there are no benefits.

So, effectively, the number of willing workers outnumbers available jobs by nearly 2 to 1. This disparity will only grow as more and more are added to the labor force creating an even greater surplus labor army - which will dictate future wages, benefits etc.

With millions numbered among a surplus worker population, wages (and benefits) can be held to rock bottom levels  since there will be such a huge backlog of ready and willing  unemployed that virtually 'anything goes'. Guy doesn't want to work overtime for half or no pay? Fine, fire him because there's 200 waiting in line - all with families to feed and rent to pay.

The point I'm making is that conditions don't even have to deteriorate environmentally to rock bottom before the effects of over-population are felt - and really close to home!

Weisman's call to action is part and parcel of an entire milieu that connects to our foolish expansion of fracking - which won't really help save us at all (only add to the CO2 burden) and the environmental stress that will lead to more wars.

If we are serious about being environmental stewards, we can't ignore dealing with the increased human population, At the level of our nation, that means fighting to get all "more baby" tax-friendly policies eliminated, and ensuring we have support systems for existing families - including low cost child care, to allow parents to work instead of being hamstrung.  We also need to press religions like the RC Church (and Pope Francis) to drop the stance against  artificial birth control, while we encourage government to offer expanded sex education including making birth control available and dropping the foolishness of "voluntary virginity".
Posted by Copernicus at 8:43 AM