Xtianoid Twitterati Strike Back at 'COSMOS' 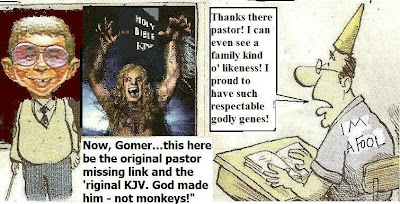 I must admit to being wrong, in my post about the new 'COSMOS' series when I wrote:

My take is there won’t be any such ‘pushback’ because these close-minded dolts won’t bother to watch it in the first place!  They are too sure of their blind faith based on nothing but superstition and old wives tales elaborated by primitive, semi-literate nomads in an ancient book.

This was in response to Denver Post reviewer Joanne Ostrow's take that 'pushback' would come from "conservative religious quarters" who didn't like the graphic animation of how the Roman Catholic Inquisition put Giordano Bruno to death for his conception of an infinite universe. The segment was very well done, especially the scene where Bruno is dragged in front of his accusers - all Bishops - who also had the appearance of psycho perverts with their dark-rimmed beady eyes and reptilian pupils and the exaggerated five o'clock shadow with some drool coming down over the lips. It was well done but I didn't think any of these idiots would respond because well, they wouldn't watch it!

But I was wrong! According to a salon.com report, these Neanderthals came out guns blazing. According to the report:

"Some of the poor souls oppressed by Neil deGrasse Tyson’s return to the promised land first pioneered by Carl Sagan took to Twitter with their predictable grumblings. My favorite: “Dear #cosmos, the origin of the universe actually is not mysterious. God had Moses write about it in the #Bible. You should read it sometime.”


Well uh, okay, if you're going by the old wives' tales of Genesis, it's not mysterious. But, to those of us who've studied physics, we'd still like to know the Earth can exist BEFORE the Sun, when the Sun's origination is essential to spin off the Earth and other planets.  We know from modern astrophysics that the solar proto-nebula had to collapse first to yield the SUN. (No planets, since they had yet to spin off the collapsing nebular cloud – it hadn’t cooled enough to allow it). As the proto-solar nebula collapsed it also began spinning and gained angular momentum. This angular momentum was then transferred to regions of the nebula that cooled and separated from the whole, and these regions became separate clouds of dust and gas that aggregated into the planets. Under a combination of electrostatic attraction (between larger charged particles) and gravity (attracting the whole mass from the center of the cloud) each planet was formed as what we call a “planetesimal”.

As more angular momentum was transferred – the planetesimals (each one) acquired their own spin (in a period of revolution) and specific shapes. The giant planets (e.g. Jupiter, Saturn, Neptune, Uranus) garnered more spin momentum than the more dense, terrestrial planets. Thus Jupiter’s planetesimal ended up as an oblate spheroid with diameter of about 88,000 mile and rotating rapidly with a day of ~ 10 hours. Earth meanwhile ended up as a relatively spherical orb with diameter of ~ 8,000 miles and day approaching approach 24 hrs. Mars ended up in a similar shape to that of Earth and a diameter of 4200 miles and day ~ 24 hours.

Thus, the Earth spun off about 1.1 billion years after the solar nebula fully collapsed, and it could not have come BEFORE the Sun.

which is nonsense. . It is clear from this that Gen.1:1-5 has stated a patent impossibility which violates all known laws of physics and dynamics and is therefore WRONG! It is clear from this that the Bible must be in error, certainly in this one passage – and if here then likely in many other places too. If this is so then it must have been written by flawed humans using limited conceptions of space, time and astrophysics which accounts are not even correct in their most general form.

The actual origin of the cosmos is indeed a deep mystery because it entails the fact that we may inhabit a multiverse, not just a universe.  Thus, the mystery enters by way of the inherent complexity of the theories, including for M-branes, e.g.
http://brane-space.blogspot.com/2010/09/how-could-universe-originate-from.html

Another howler in the salon.com report is the Evolution News and Views take,  published by The Discovery Institute - backward bunch of Seattle-based goobers who are all for "intelligent design" but refuse to explain who or what this 'designer' is. Anyway, their take on COSMOS is that  Giordano Bruno "wasn’t even really a scientist, and he was burned to death because of his theological heresies and not his belief in Copernican theory," (SO HE DESERVED IT!)

Also,  "the main reason he showed up on “Cosmos” at all was because he was the only one with even a passing association with a scientific controversy to be burned at the stake during this period of history.”

Of course, this is nonsense. According to Henry Lea, the author of 'The Inquisition of the Middle Ages' we don't really know how many of those expressing scientific theories (say based on Copernicus' heliocentric theories) might have been burned at the stake. It could run into the thousands, as records weren't always kept. Also, their property was also confiscated first, and there was little to go by in ascertaining their identities.  Bruno then is likely the most major and significant example, representing all  those of scientific temperament burned at the time.

The argument that he "wasn't really a scientist" also rings hollow and uninformed. What is science, after all? It is based on open inquiry, asking questions and finding out ways to pursue the answers. Giordano Bruno may not have had the empirical tests available to test his concept of an infinite universe, but he did extrapolate to his concept from Copernicus' results. Yes, his idea of untold numbers of populated worlds was speculation, but it was scientific speculation little different from Carl Sagan's own speculations, written about in his assorted books.

The dumbest aspect of the knuckle dragging religious Twitterati is that Cosmos is labeled “a glossy multi-million-dollar piece of agitprop for scientific materialism” as if that’s a bad thing.   In fact, scientific materialism is the ONLY philosophy that puts us in touch with reality, all else is superstition and tomfoolery.

It is precisely scientific materialism that provides and energizes the drive to make measurements to confirm that what we think we observe, is actually there- and then accounting for it in a physical setting.  For example, it enables us to grasp that the "Miracle at Fatima" was no miracle at all.

In his essay collection Unweaving the Rainbow biologist Richard Dawkins, Britain's most prominent atheist, chose to examine the Fatima miracle of 1917, where 70,000 people "reportedly saw the sun move", to apply Hume's principle: As Dawkins observed:

"On the one hand, we are asked to believe in a mass hallucination, a trick of the light, or mass lie involving 70,000 people," Dawkins writes. "This is admittedly improbable. But it is LESS improbable than the alternative: that the sun really did move...If the sun had moved in truth, but the event was seen only by the people of Fatima, an even greater miracle would have been perpetrated: an illusion of NON-movement had to be staged for all the millions of witnesses not in Fatima."

The dual –tandem improbability associated with the Sun actually moving is less than getting a royal flush in poker 6.5 million times in succession. It is actually less than the proverbial monkey on a typewriter re-typing Hamlet in its entirety, and with no errors. It is indeed, beyond the realm of physical possibility especially as NO solar observatories around at the time - detected ANY motion! Hence, it had to be all in the believers' heads.

This comports with David Hume's principle of what it would take to accept any "miracle":

"No testimony is sufficient to establish a miracle, unless the testimony be of such a kind that its falsehood would be more miraculous than the fact which it endeavours to establish."


In other words, given a mass hallucination by those at Fatima that day is LESS miraculous than that the Sun actually moved even a centimeter -- then clearly THAT is the only explanation the rationalist can accept!

Hence, we see here the sheer power of scientific Materialism at work. Observations, REASON and formulating a consistent conclusion based on them!  Contrary to most fundies' misperceptions, scientists do not willy-nilly accept violations of physical laws without demanding empirical support for the claim. If you insist that water can be changed into wine, a scientist (or scientific Materialist)  will demand to see your evidence for such a feat. The same applies to the claim of a man "walking on water", or "brought back to life". In each case, the evidence by which a natural law is violated must be thoroughly scrutinized.

In this process, all alternative natural explanations must be considered-- including outright trickery or fraud, before the actual violation of a physical law is conceded. If you instead simply quote an ancient text, you will be summarily dismissed as a babbling idiot.

The 'Cosmos' complainers, if they have any sense, will go back to their enclaves and rethink their nonsense, and also realize this is one contest they can't win.   As the author of the salon.com piece put it:

"All we need to do to see our world descend into a real pit of hellfire is to continue to let the nonsense propagated by The Discovery Institute stand uncontested, while we greenhouse gas ourselves to the boiling point. Kudos to “Cosmos” for calling bullshit."

Posted by Copernicus at 9:39 AM