The Younger Demographic Abandons Religion - It's About Time! 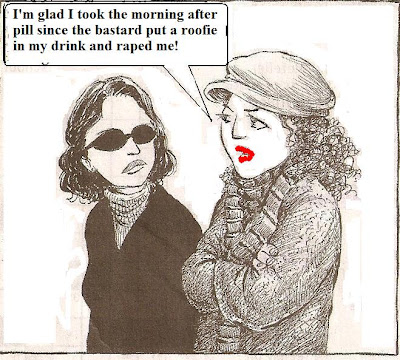 As I've noted in earlier blog posts, religion is distinct from the belief in a transcendent Being. While the endless search for the latter is likely rooted in the brain, i.e. the brain’s orientation and association area(OAA) ,  see e.g. http://brane-space.blogspot.com/2014/01/peeling-back-layers-of-religious-brain.html

religions are cultural-social creations, arising from particular ethnicities and geography.

That is, while the brain and OAA engender the God-concepts which we embrace, these concepts are not dependent on having a religion.


Religion - by contrast- is an entirely human artifact generally contrived for the purpose of control of a population via mind viruses.  Religion has been described as a "reaction to the experience of the transcendent" - and this may carry more truth than all the religious books one could ever read in a lifetime. It means that at some phase religion short circuits itself by inveighing against the natural instinct for spiritual self-discovery in most humans. It means that religion's warp and woof is to filter out the transcendent so its power implications are dispersed into assorted secondary human channels or  "media" (e.g. priests, popes, rabbis, ministers etc.)  as opposed to being allocated to the individual to exercise on his own. (Which would allow him to become too much like the ancient Gnostics).

Thus, religion FEARS too much self-autonomy, independent thought and questioning which is why it often retains an absolutist stance regarding the nature of the transcendent- and has historically held out assorted punishments when it beholds any transgressions of concept, or "belief", i.e. for heretics: 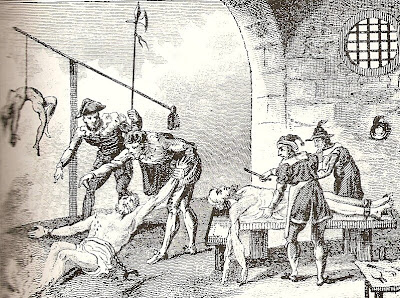 Heretics undergo torture at the hands of the Inquisition, for their rejection of basic Catholic tenets.

The mind virus basis for most religions (except the impersonal) was first articulated by biochemist Jacque Monod in his book Chance and Necessity. On page 155 Monod observes:

"The human group upon which a given idea confers greater cohesiveness, greater ambition and greater self-confidence thereby receives from it an added power to expand which will ensure the promotion of the idea itself. Its promotion value' bears no relation to the amount of objective truth the idea may contain."

"The might of the powerful armament provided by a religious ideology for a society does not lie in its structure, but in the fact that if this structure is accepted, that it gains command".

And indeed, we already detect this playing out on the national stage as a group of powerful religious interests, as embodied in 'Hobby Lobby' - seeks to have certain contraceptive provisions in the ACA overturned by the Supreme Court so that they do not have to comply. As Justice Elaine Kagan noted in one of her ripostes, "What next? Will another religion choose to reject vaccinations? Another choose to reject sex education? Where does it end?"

But this is the point given that the most powerful and insidious memes- mind viruses are those dedicated to the spread of religious beliefs.  The most pervasive as well as pernicious are those that hijack political or social power  using what Monod, for example, calls their innate "infectious power", or how easily they are spread.  (One reason one must always be wary of proselytizers in any form! They all clearly seek to enhance the "propagation value" of the virus)

All of this is why it's so gratifying to now learn that of those aged 18 to 35, three in 10 say they are not affiliated with any religion, while only half are “absolutely certain” a god exists. These are at or near the highest levels of religious disaffiliation recorded for any generation in the 25 years the Pew Research Center has been polling on these topics.

In fact, the numbers could be even more favorable, and they might be closer to 4 in 10 unaffiliated with a religion. Why? A clue is provided by columnist Tina Dupuy, who  observes. “When it comes to self-reporting religious devotion Americans cannot be trusted. We under-estimate our calories, over-state our height, under-report our weight and when it comes to piety—we lie like a prayer rug.”

So 'Muricans are too chicken shit to divulge their real leanings and predilections in many polls- namely those bearing ultra-sensitive topics like weight, religious belief etc.. So what's new?

Anyway, even more satisfying is that e very piece of social data suggests that those who favor faith and superstition over fact-based evidence will become the minority in this country by or before the end of this century. In fact, the number of Americans who do not believe in a deity doubled in the last decade of the previous century according to both the census of 2004 and the American Religious Identification Survey (ARIS) of 2008, with religious non-belief in the rising from 8.2 percent in 1990 to 14.2 percent in 2001. In 2013, that number is now above 16 percent.

If current trends continue, the crossing point, whereby atheists, agnostics, and “nones” equals the number of Christians in this country, will be in the year 2062. All of which is terrific, except that I will likely not be around to see it.

How did this turnaround from specious religious faith happen? Perhaps many reasons, including the emergence of the "New" atheists prepared to take on religionist bullies where and when they see fit - as opposed to cowering. And also the overreach of the religious politicos - as in the 2012 election with assorted nitwits talking about "legitimate rape" and other nonsense.

But it likely began even earlier. Political scientists Robert Putman and David Campbell, the authors of American Grace, argue that the Christian Right’s politicization of faith in the 1990s turned younger, socially liberal Christians away from churches, even as conservatives became more zealous. “While the Republican base has become ever more committed to mixing religion and politics, the rest of the country has been moving in the opposite direction.”

Nowhere is this being played out more than in the arena of abortion and contraception, and one can see again how the religious will likely overplay they their hand with this new round at the Supreme Court. Whichever way the Court rules, the non-affiliated demographic is likely to grow and that is a good and healthy thing for this nation!