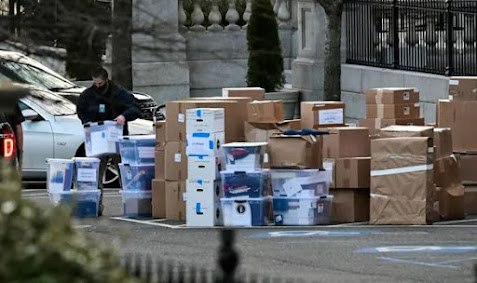 Some of the classified files the gangster maggot had 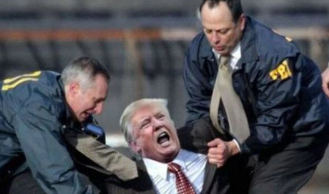 "Hey! I didn't wanna keep Kim's love letters, but I had to!"

The biggest news yesterday was the  FBI executing a search warrant Monday morning at Trump’s residence at Mar-a-Lago.  It came as part of an investigation into Trump’s potentially unlawful removal and destruction of White House records after his presidency, according to two sources familiar with the matter.

The move by the Justice Department to search Mar-a-Lago over the removal of 15 boxes of presidential records from the White House, including classified documents, (See top graphic), as well as the destruction of other materials, marks a dramatic escalation in the inquiry.  And as law guru Harry Litman noted last night (ALL In) ,  this could well be the means of preventing the scum from ever holding office again.

Of course, in the wake of the FBI executed search  Trump screamed like a stuck pig in a bitter statement Monday evening, bellowing:

“My beautiful home, Mar-A-Lago in Palm Beach, Florida, is currently under siege, raided, and occupied by a large group of FBI agents. They even broke into my safe!”

Well, no shit, Sherlock, that's what happens to traitors who try to spirit away classified documents. In his deranged reaction the Dotard also brayed that the Democrats “desperately don’t want me to run for president in 2024 “  - when in actual fact even the Wall Street Journal editorialists prefer Trump not run because he’d likely lose again to Joe Biden.

In what former Watergate prosecutor Jill Wine-Banks described as a furious, cockeyed statement, Trump actually conflated the FBI search with  the 1972 “Watergate” break in– comparing the latter’s burglars to “Radical Left Democrats”.  Of course, Dems had nothing to do with the raid, it was all lawfully signed off on by a federal judge.  Further, FBI agents conducted the search of Mar-a-Lago, not “Democrats’”.  This but another dastardly effort by Trump to politicize the execution of  lawful warrant, using conflation, unhinged rhetoric and bombast.  “The usual Trump song.”  according to former Obama strategist David Plouffe appearing on All In.

Trump continued his rant yapping that Dems “will do anything to stop Republicans and Conservatives in the upcoming midterms elections”.  In fact, it’s not Dems but sensible voters who will stop Trump’s MAGA horde from gaining power.  This is because they know – or should know- that such power will only be abused by conducting a host of nutty, frivolous “investigations” on the people’s dime. Hell, in the wake of the FBI action, Reep Minority leader Kevin McCarthy even warned AG Merrick Garland to “preserve all documents”.   So it’s no secret these vermin intend to turn the rule of law on its head in specious defense of their tin god Trump.

According to NY Times Maggie Haberman, Trump dumped, burned or flushed (into toilets) dozens of documents.  (On Monday, Axios published photos of folded-up paper, marked with Trump’s telltale handwriting, using his favored pen, a Sharpie, submerged at the bottom of various toilet bowls.) Also the disposals occurred multiple times at the White House, and on at least two foreign trips. Most words in the docs – according to the Guardian were illegible, but one name that is clearly visible is that of the New York Republican congresswoman and potential 2024 running mate Elise Stefanik.   According to Haberman”

“That Mr Trump was discarding documents this way was not widely known within the West Wing, but some aides were aware of the habit, which he engaged in repeatedly. It was an extension of Trump’s term-long habit of ripping up documents that were supposed to be preserved under the Presidential Records Act.”

In a  forthcoming book, Confidence Man, Haberman also reveals that she was told that the ex-president has maintained contact with the North Korean leader, Kim Jong-un.  Letters from Kim – once described by Trump as “love letters” – were among 15 boxes of documents, letters, gifts and mementoes that turned up at Trump’s Mar-a-Lago estate a year after he left office.  (see graphic)

Trump, bear in mind,  has previously (in February)  come under scrutiny for his flagrant violations of the Presidential Records Act of 1978 – mandating the preservation of White House documents.  It was that months earlier search, and inadequate answers from Trump's team of lawyers, that triggered yesterday's action and potential legal jeopardy for Trump over his records practices.

The statute governing the willful and unlawful removal or destruction of presidential records, though rarely enforced, carries significant penalties including: fines, imprisonment and, most notably, disqualification from holding current or future office.

Finally, let's remember that FBI chief Christopher Wray, was appointed by Trump himself before he left office.   Talk about poetic justice. Well, almost.

While the fantasy scene of Trump being hauled off by FBI agents is just that, we have to hope that at least Harry Litman's scenario of Trump being convicted of violating the Presidential Records Act of 1978 comes to pass. In that regard, never being allowed to hold any office again.  Except maybe dog poop sanitizer in Lake Panasoffkee, FLA.    It is totally true, as Financial Times columnist Edward Luce wrote today, e.g.

opinion content. A sea of troubles surrounds the question of whether to prosecute Trump

That any prosecution of Trump - even for violating the 1978 Presidential Records Act - will have serious repercussions, with MAGA nation going berserk spreading lies and bullshit  about the basis for the search warrant and the FBI's handling.  But confrontation with the deplorables cannot be avoided on that account, even if it risks ripping this already divided nation further apart.  Hell, even conservative WaPo columnist Hugh Hewitt pointed out yesterday:

“There is little doubt that the residence and offices of a former president can be subjected to lawful searches and seizures. Anyone doubting this should read the opinion of Chief Justice John G. Roberts Jr. in 2020’s Trump v. Vance as well as the concurrence by Justices Neil M. Gorsuch and Brett M. Kavanaugh.

If a sitting president is in some circumstances subject to criminal subpoenas from state officials, a former president can most certainly be subjected to criminal process by federal agents. This has never happened before, but as with all things Trump, the past is no guide to the present.”

And btw all this bellowing about "needing to know"  what’s in the warrant could be solved in a heartbeat by Trump.  He has most of the info in the warrant he rec’d Monday. He just refuses to disclose it because he likes to create chaos, division and shit storms. Thus his aim now to politicize and weaponize this non-transparency against Biden and the Dems. The maggot even has his dregs and losers comparing a lawfully issued search warrant to "Nazi rule" - and we know most of these forlorn fools have no idea of the history of Nazi rule.  Likely none of these clowns have ever spoken to WWII era Germans like I have, e.g.

But this is who Trump is, a  rabble rousing traitor scumbag, only invested in destroying this nation, and who should have been hung six times over by now.

For numerous reasons this lawless, degenerate turd cannot be allowed in the Oval Office ever again. Especially as he harbors loads of vindictiveness steeping in his febrile, cockroach brain, e.g. 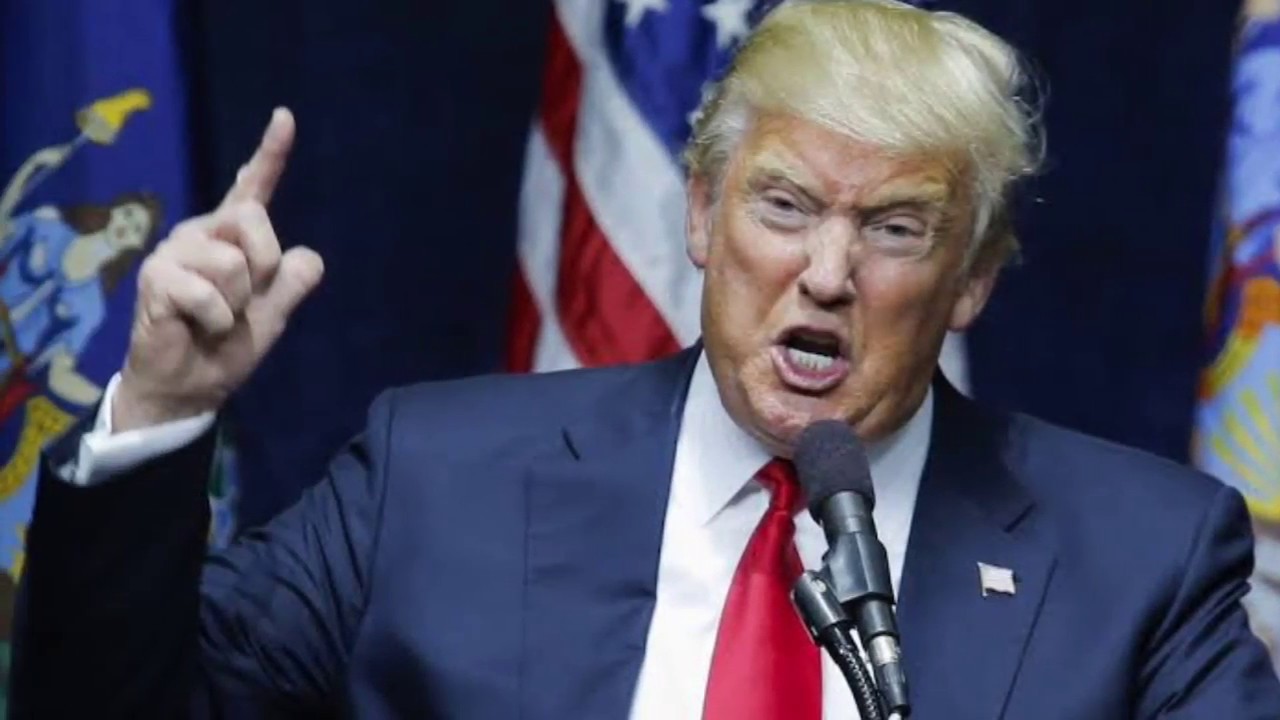 In the words of blogger Jaime O'Neill ('A Nation Mindfucked'):

"I've been gobsmacked by the degree of anti-American fascism Trump has unearthed. I've written thousands upon thousands of words trying to explain it because, even for a guy who has been arguing with himself about the nature of his country, I'd managed to hold onto of the thought that Americans were basically decent people. That view is utterly incompatible with the idea that so many of my countrymen could ever vote for an obvious sleazeball, a malevolent narcissist, a gonif, and a cheesy carnival barker like Donald Trump.."

Scene of Pro-Trump supporters in Charlottesville 5 yrs. ago.: 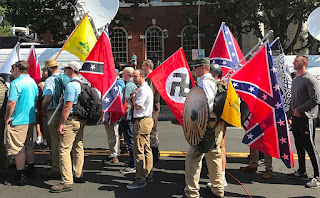 “Nothing like this has ever happened to a President of the United States before,” Donald Trump raged today after FBI agents searched his Mar-a-Lago home in Palm Beach, Florida and broke open a safe, apparently looking for documents that Trump illegally took from the White House.

To set the record straight. Trump is no longer president of the United States. He’s a normal citizen. He may believe he’s still president because he never conceded the 2020 election, but he lost that election. As a result, he is subject to the same search-and-seizure provisions, under court supervision, as is anyone else. 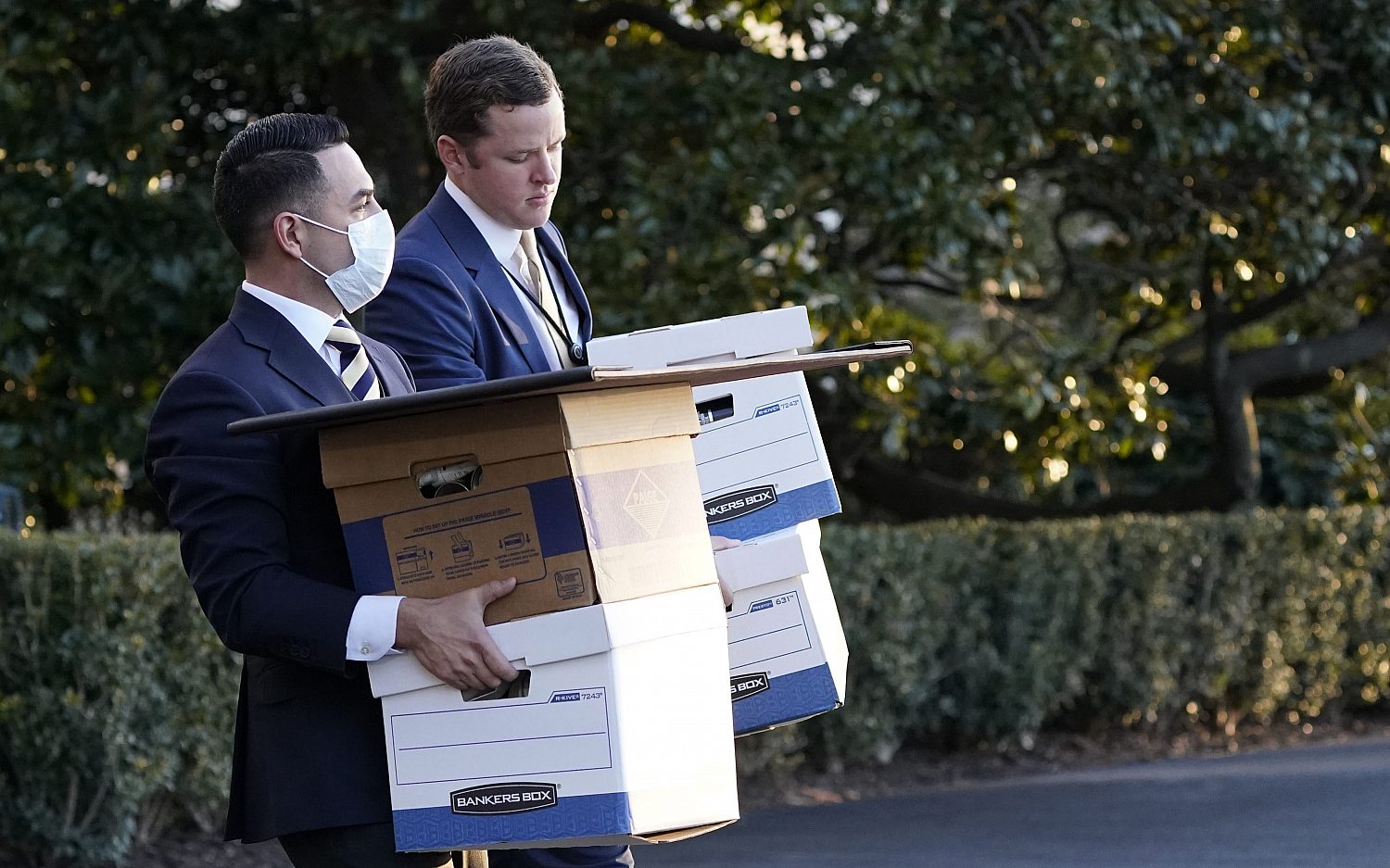 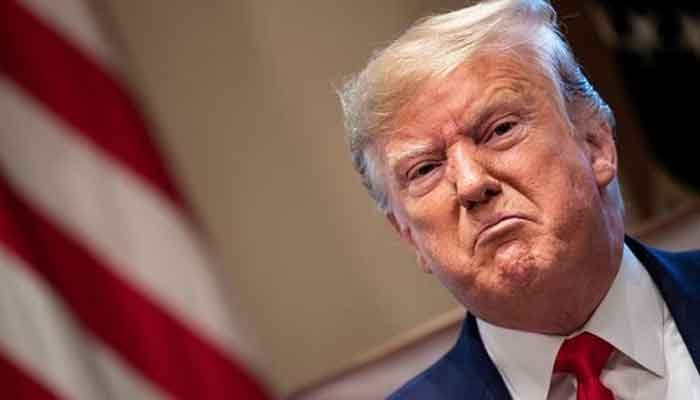 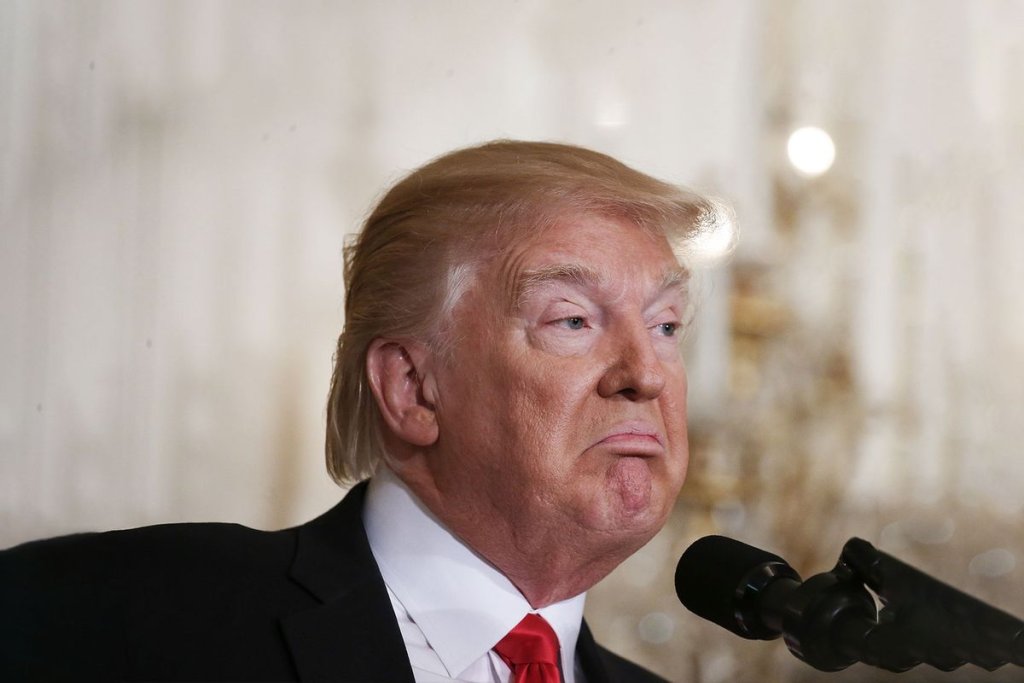 There's a critical factor to keep in mind regarding the FBI raid of Mar-a-Lago, the resort hotel Donald Trump resides in Florida: Getting a federal warrant is not child's play.

As former federal prosecutor and current defense attorney Ken White noted in a lengthy Twitter thread following the raid, the "feds do not seek search warrants lightly." As White explained, such warrants generally require "probable cause to believe that the specified location has the specified evidence of a specified federal crime." This one, in particular, would have been combed over by multiple high-ranking authorities, including Attorney General Merrick Garland himself. Crucially, while we the public do not know the details of what is almost certainly one of the most careful and detailed warrants imaginable, Trump himself does, because the subject of the search is given the warrant.

Posted by Copernicus at 4:59 AM