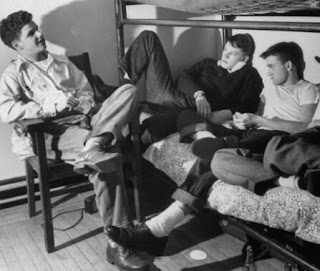 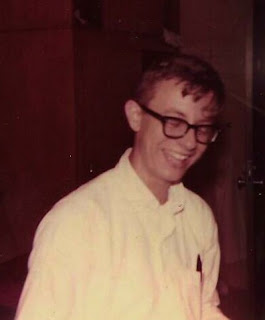 We all love debates, at least students did when I attended Loyola and USF in the 60s. One of the fantastic things about first entering university (Loyola) in September, 1964, was the opportunity for one-one, or two-on-one, or better three-on -one (the 'one' usually me) debates, or what we called "bull sessions".

I always enjoyed controversy in these exchanges especially with southerners attending Loyola. My two favorite opponents were two Mississippi (from Jackson) good ol' boys, Roy Woody and Bill Dooley.  Actually, in our first bull session they confronted me in Biever Hall and asked what I thought about LBJ and the Gulf of Tonkin incident, which would then lead to the Vietnam War. I told them I thought that incident was fake and set up as a pretext to launch a war in Vietnam - which over 40 years later turned out to be true with release of over 2o0 documents in 2006-07, e.g.

How did I know back in '64?  I didn't. All I knew is the whole thing didn't smell right, and besides I didn't trust a damned thing LBJ said or did.  Well, this  skepticism blew their gaskets and led to a string of encounters over a number of weeks, including several with up to a half dozen dorm onlookers.  At one point in one dorm room exchange- with 7-8 onlookers, Dooley asked me: "So then if the commies attacked us you would just high tail it an' run. What about fightin'?"

I replied, "Only if it was a legitimate or real attack and I don't believe the Tonkin incident fits that bill. Prove to me the North's gunboats fired first and we can go on from there."

At which point I also invoked several arguments from the Loyola Ethics class we'd just attended some hours earlier, and asked Dooley:

"So let me get this straight, you come here to a Roman Catholic university but you don't really accept the moral or ethical principles being taught?  Then why are you here?  You could as well have gone to Ole Miss!"

This gobsmacked the poor guy who lurched off with his hands holding his Brylcream-slicked head yelping: "Ah swear I just cannot argue with that guy! He always finds some out!"

Overhearing him as he traipsed down the Biever Hall hallway I howled with laughter and as I entered my own room, 627, my roommate had a camera ready to catch the cackles.

What has all this past history to do with the present post.  Only that the issue of campus debates arose in a recent Sunday Denver Post  Perspectives essay, 'The Problem With Campus Debate', by University of Denver political science professor Seth Masket.  Masket referenced a piece in the NY Times in which Emma Camp - a student at the Univ. of Virginia-  was miffed about the lack of class debates in her courses.  Emma, as it turned out, complained that she "came to college seeking classrooms full of energetic debate" but never found any.  She wanted to be exposed to "what students really think" but instead found "ideological conformity and self-censorship."

No one told her that college classrooms are not the place for actual debates, as opposed to discussions.

On reading that  piece I tried to picture the same Emma showing up at Loyola in September, 1964, and whether her expectations would be met.  In fact, they wouldn't be because she would not find any "energetic debates" going on in ethics, philosophy, theology, economics, political science or other classes. She would find them going on in dorm rooms, and if at Loyola then - in various side rooms and cafes at the Danna Center.  There simply wasn't the time nor was that the intent of the Loyola profs or their courses.  There was generally just too much material to cover in each class to waste even 10 minutes on student ego trips or gasbagging. Profs figured if you really wanted to debate any topic you did it on your own time, not theirs.  But then even too many debates on your own time might have you flunking tests, quizzes.  For example, for your first 50 min. 'quiz' in Theology,

1. Estimate the percentage of the Qumran scrolls that are copies of books of the Bible and give your reasoning. Of which proto-canonical books were there copies or fragments? How is this ascertained?  Of which deutero-canonical books? Define each type of book, making clear any unfamiliar terms.2. WHY are the Qumran scrolls of such great importance? Why would it be erroneous to conclude that these scrolls provide us with the original reading of the New Testament books?3.What aids did biblical scholars already possess toward reconstructing the original reading of the Old Testament books? How have the discoveries at Qumran enhanced the value of the Septuagint translation as a reliable aid for reconstructing the original reading of the Old Testament that appears in the scrolls?

You get the point.

"There's a great misperception in discussions about higher education that somehow college campuses are a site for robust debate between competing ideas and that this is the essence of a university education.  Some of this misperception has been fostered by interest groups like the Steamboat Institute -  which pushes for debates to bring conservative ideals onto campus. But more generally there are op-eds like the recent Times' one that simply suggest universities are places where people just argue all day over ideas in the public square and the best ideas survive".

That last cartoon depiction had me laughing almost as hard as after my dorm debate on Vietnam with Bill Dooley. Clearly, anyone who would think such drivel has not spent much time at a proper university.  As Masket points out (ibid.):

"Debate is a skill, not knowledge. It is sometimes used in the classroom along with many other techniques designed to teach. But it only works well within some set of parameters. And steeped in class material. Generally, what we want in a classroom is discussion, not debate."

For example, in our Loyola freshman theology class, the topic of "demoniacs" in the New Testament came up for discussion in early 1964.  We would receive the topic handouts, i.e. 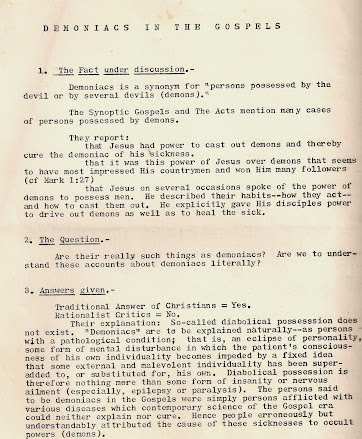 Then be asked how we'd interpret the material, in the more modern sense, or the biblical (ancient) sense, and why.  The core question to be addressed: Are there really such things as demoniacs?  Are we to understand these accounts literally?  The process of student participation in the discussion then shed much light, as well as additional knowledge of how difficult it might have been at that time - for a NT observer - to distinguish an actual demon-possessed person from a shizoid personality or even schizophrenic.  There was no "debate" involved in any of this. If you really wished to debate whether demons or demon possession was real you did it back in the dorm rooms.

Masket's last point is a good one and bears serious consideration.  That is, that the "push for more campus debate" basically comes from the Right.  This aggrieved tribe feels its ideas and beliefs are either marginalized or "cancelled" and they demand a broader stage, like on a college campus.  They never really consider that if their ideas were really worth the paper printed on they wouldn't need to make such victim-laced appeals.  Masket also dismisses this nonsense noting a number of his colleagues teach the principles and ideas of William Buckley (founder of The National Review), Milton Friedman, Hayek and others.  What more do the righties want? Oh wait, probably more attention to QAnon claptrap and the associated conspiracy ideations, say to do with Covid, or the 2020 election.

If that's Ms. Emily Camp's main beef maybe she needs to sign up at a conservo school, say like Bob Jones University?