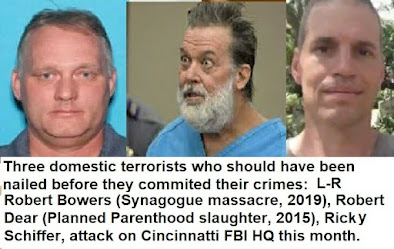 The latest report that Trump's terrorists made threats to set off a 'dirty bomb' at FBI headquarters should set real Americans' teeth on edge.  That these apes have now run amok is largely based on the lies spewed by Trump in the wake of the FBI's search of his Mar-a-Lago hacienda.  Some of the ignorant lies I've encountered just on the WSJ (comment after articles) include:

- Trump can't be held accountable for having top secret/ SCI files at his place because it already is designated with "NSA safe rooms" so the files can be read and stored there.

- Trump can't be indicted for having classified files - even SCI (secret compartmentalized) if Hillary isn't indicted for her emails.

All of which has been skewered by former DOJ spokesperson Neal Katyal:

But such is the rot we've all had to deal with but dispatched largely from the endless propaganda spewed by the reactionary Right media, parroting Trump himself.  Including The Wall Street Journal, e.g.

Payback for the Mar-a-Lago Raid Will Be Brutal

Such propaganda repeated over and over fucks weak minds and sends them on dangerous paths as we've seen recently. The latest yesterday when a Trump-pumped screwball crashed his car into a barricade protecting the U.S. Capitol then opened fire with a handgun before fatally shooting himself.

As MAGA nation violently erupts in the wake of the FBI's justified raid of Mar-a-Lago, it is clear more stringent domestic terror laws need to be on the books to head off the next attacks.  Because, as Michelle Goldberg notes in her recent column ('The Absurd Argument Against Making Trump Obey The Law' )

"The far right is constantly threatening violence if it doesn’t get its way. "

Thus, the far Right will always be out for vengeance and blood - and their calls for 'dirty bombs' as well as attacks on the FBI and their families -  are just the tips of the iceberg.  But they ought not be dismissed out of some misplaced belief it's just bravado or hype for the dregs of 4chan, or The Donald.

Indeed, the violent January 6th attack on the Capitol was merely the first shot over the bow of what remains of U.S. civil society. Trump, the arch criminal and traitor, has himself - through his feral lies and lawlessness - turned a fourth of the nation into willing criminals who yearn to abet his every move.

Fortunately, there are now calls  (even from some GOP legislators) for a more cautious tone.   This may be too little and too late, especially as thousands of online threats have emerged against law enforcement. A gunman on Thursday attacked an F.B.I. office in Cincinnati, and on Friday, the Department of Homeland Security distributed an intelligence bulletin to law enforcement around the country that warned of “an increase in threats and acts of violence, including armed encounters, against law enforcement, judiciary and government personnel” after the search. Adding:

“The F.B.I. and D.H.S. have observed an increase in violent threats posted on social media against federal officials and facilities, including a threat to place a so-called dirty bomb in front of F.B.I. headquarters and issuing general calls for ‘civil war’ and ‘armed rebellion,’”

Domestic terrorists, of course, have been at it even before January 6, 2021, but little has been done to halt their crimes - which exceed those of Islamic terrorists by many magnitudes. For example, in 2015, Robert Lewis Dear opened fire on a Planned Parenthood clinic in Colorado Springs, slaying three and injuring 7.  In 2019, Robert Bowers opened fire at the Tree of Life Synagogue near Pittsburgh, killing 11 in the worst mass slaying of Jews in U.S. history.

"Lawmakers from both parties have made the case in recent years to make domestic terror a crime".

"Domestic terrorism isn't a federal crime in itself"

So a cabal of white nationalists, Aryans, Nazis and other refuse can plan mass slaughters to their hearts' content and no federal law enforcement agency can do a thing to stop it, i.e. "without evidence of the violent crime."
In other words, in the federal milieu we'd have to wait for the scum to blow up or shoot up innocents before making a move. Inaction on this front has allowed attacks to continue, as reported by the Southern Poverty Law Center, and has also led to the impunity with which Trump’s MAGA terrorists are erupting now.  Not just ordinary 4chan "chatter" but actually making threats of using dirty bombs on FBI headquarters, as well as barking "if you are FBI you must die" - as one PA maggot did.  Also such refuse and vermin attacking FBI personnel and their families. Numerous threats have been posted on extremist websites but nothing has been done to arrest these terrorists, as would be the case with Islamic (e.g. ISIS) extremists.

The recent eruption of the MAGA terrorists in the name of Trump shows this is foolishness, and laws need to be on the books to halt these people - just as the feds can use the Patriot Act to halt ISIS actors -  and other Islamic terror threats.  Not to group them in the same category because of a distorted belief in "free speech" or political cowardice is a mistake all Americans - especially law enforcement- will regret. We, actually lawmakers, have let this derelict response go on for too long without responsible action.

At the same time we must take care to ensure any laws enacted target the correct instigators, which are almost exclusively Right fascists, and avoid ideological 'drift'. Recall Britain passed a Public Order Act to restrict fascist demonstrations, and the government then deployed it against communists.  The U.S. Congress established a House Un-American Activities Committee with the goal of exposing Nazis, only to turn it overwhelmingly against the left.

Even in 2020 the Right's terrorists wanted to deflect attention to the George Floyd protesters so they could more easily plan and carry out their attacks - ending in the January 6th insurrection.  Thus, we must be wary not only of the domestic terror sources, but targeting them without conflating - for example, Antifa, with the Proud Boys, or Oath Keepers. 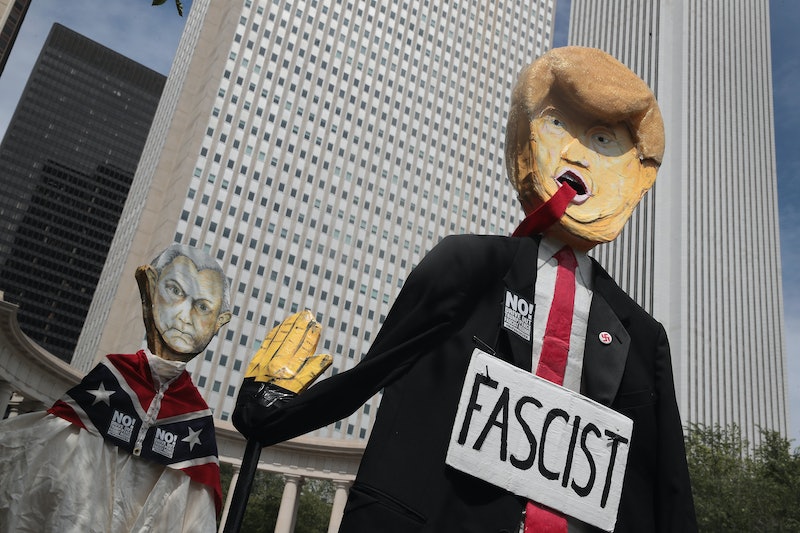 The sequence rolls on: break the law, incur retaliation, then incite violent backlashes against “lawless repression”

How long will it take America to get the Trump Terror cycle, or that his gang is revving up the next the civil war? Not with formal enlistment, organized armies and fierce battle lines, for that would disastrously set militant amateurs against fully-armed professionals. Plus, Trump is a creature of impulse, not planning, the opposite of good generalship. Malignant narcissists live in the twisted present tense, spurring made up (“alternative”) realities on the spot. Why else would Trump hire expendable wackos like Eastman, Powell, Giuliani, Flynn or the Pillow Guy?

Above all, Trump trusts his savvy, operator “genius,” accepting shortfalls as inevitable but temporary. If he can repeatedly disrupt the status quo, the subsequent chaos offers this Master of Mayhem the opportunities of a lifetime. Or so goes his derangement. It’s not the noisy, never-ending scrimmages that count, but who’s left standing when the dust clears. More “retaliation” only makes Trump the greater victim, and even thuggish genius needs backup to sustain maximum pressure.

Pushed to Extremes: Domestic Terrorism amid Polarization and Protest | Center for Strategic and International Studies (csis.org)