As Normal Protein Sources Are Exhausted Will The American Masses Be Ready For Bug Burgers? 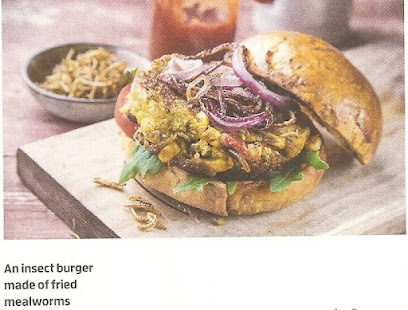 The path we're on in terms of food, especially proteins, is unsustainable as everyone knows.  For example, one juicy 6 oz. burger requires 674 gallons of water.   One grilled chicken breast of 7 oz. requires roughly 116 gallons of water to produce at the end point.  To get that juicy pork chop some 300 gallons of water is needed. Given what we know about water depletion this cannot go on, and novel sources of protein will have to be found. Especially in a world of eight billion plus humans.

According to a recent report in New Scientist (May 6, p. 12) swapping a typical American-European diet heavy on meats and dairy for insect protein (like the meal worm burger shown) could cut food-related greenhouse gases immensely.  But the even bigger benefit would be to enhance water and land use by up to 80 percent.  Water and land use that would otherwise go to supporting cattle, hogs, chickens etc.

Bajan biologist John Phillips is a huge fan of insect food and believes altering human consumption of proteins to insects (which outweigh all of humanity)  would be a godsend in terms of saving water in an ever drier future world.  His favorite meal is fried Bajan crickets, e.g.

But is happy to admit he is a Connosseur of other creepy crawlers  - like grasshoppers- though he draws the line at cockroaches and locusts.   He also points out, as does the New Scientist piece, that "an optimized diets of insects"  tapping those highest in bug protein like crickets and grasshoppers - could slice greenhouse emissions by 83%, water use by 84 % and land use by 87%.  And as he notes, regarding the expected 'yuck' factor:

"The revulsion to eating insects is all in the head anyway. I could prepare a sumptuous dinner for you of just fried crickets and you'd wolf it down if I never told you exactly what you were eating."

A 2012 Colorado experiment on kids' affinity for insect ingestion occurred compliments of Wendy Lu McGill, who prepared a set of bug dishes to munch, including: dried mealworms, roasted crickets (see picture), worms, and M&M coated cookies made from pulverized crickets cooked up in a delicious batter. (see below): 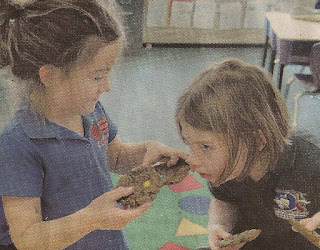 The kids generally were open minded enough to try most of the offerings though they usually had to sniff first at the edibles on offer, and unanimously turned down the worms. Only one kid turned down all, stating emphatically: "I do NOT want to eat bugs!" adding that she was a vegan anyway.  This, of course, is the 'ick' or disgust factor that McGill also must confront in adults - though to a greater degree. But as John Phillips has pointedly noted:

"When you are bloody hungry and there's no beef, chicken, pork or tuna to be found,  believe me, you will cook up those crickets, ants and grasshoppers and eat 'em!' !  And like em too!" 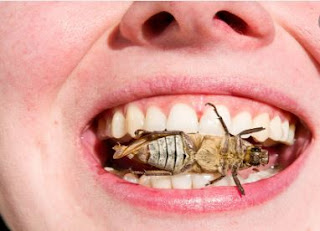 Most adults (except maybe the adventurous ones who attended the Denver Western Stock Show in 2012 featuring assorted bug dishes, seem to be under the illusion they can go on indefinitely chowing down flatiron steaks and 100 % beef burgers that are all cattle -based. And hence, high water intensity.  But the finite limits of water - even now ready to have Lake Mead at 'dead pool' level - do not permit it. In a world of 9 billion humans by 2050, bug pate may well be the only protein source widely available.  And kids instinctively seem to know they will be the main beneficiaries of the changing diet.

As McGill observed in her experiment ten years ago, reaching kids is most critical, given they're the ones who will be facing the limited (standard) protein future.  As McGill put in a March, 2012 Denver Post piece:


"They're forming their habits now. Whether or not they choose to eat insects, it's important to me that they think about how their food affects the planet."

It's also time for other Americans get on the bug bandwagon, given 2 billion around the world already have insects on the menu. Mexicans, for example, already savor escamole or ant caviar. There's no reason American palates can't also adjust and enjoy these novel foods. Besides, insects are packed with protein, vitamins and minerals. Compared to livestock, insects raised on the industrial scale require far less land and water, and the process emits vastly less CO2.  John Phillips informs me that the bug diet will also "reduce cardiac deaths as well as diabetes and prostate cancer", i.e. from getting meats - animal protein out of the diet.

The industrial scale production of food-grade bugs is now proceeding apace, at "Little Herds" in Texas and "Tiny Farms" in California.   By 2040 it is hoped these units will be going full strength  nationwide to feed a hungry nation which will be assuredly short on cattle, pork, fish and even chickens.

Already, the UN is promoting insects as food, and has identified 1,900 edible varieties while maintaining an information portal. This is in recognition of the more than 1 billion chronically hungry people as well as the increased global demand for cattle-based meat and the grains (e.g. corn meal) to feed animals.

According to a 2013 UN report on food sustainability and production:

"Current food production will need to almost double by 2050. Land is scarce and expanding the area devoted to farming is rarely a viable or sustainable option.  Oceans are over-fished and climate change and related water shortages could have profound implications for food production. What we eat and how we produce it needs to be re-evaluated ."

Bugs: The food that can feed, and maybe save, the planet | CNN

Posted by Copernicus at 6:58 AM