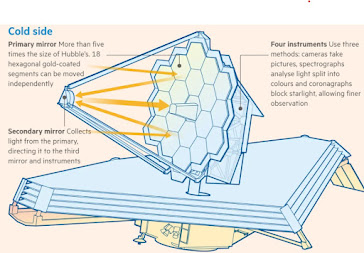 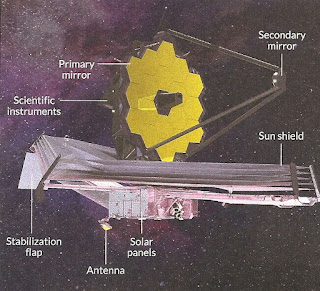 The successful launch of the James Webb Space Telescope Christmas morning  at Kourou, French Guiana in a European Ariane 5 rocket ,  was an achievement some 30 years in the making  and with nearly $8 billion in cost overruns.  But hey, who's counting when there is such vast promise of exposing the cosmos (and its origins) to humans who will literally be seeing it for the first time.

I am referring to the fact this marvelous instrument will be 'tuned' into the ancient radiation of the universe, from a time just 400 million years after the Big Bang.  Thus, the telescope essentially works like a time machine to capture what the universe was like billions of years ago, when the first galaxies began forming. It is during this epoch when astronomers suspect the first embryonic galaxies began making the universe transparent to light, i.e. via ionization, or stripping electrons from cosmic hydrogen.

There shouldn't be any surprise then that the Webb - to accomplish its mission - will be focused on the infrared region of the electro magnetic spectrum, specifically from 0,6 - 28.5 micrometers.  By comparison, the Hubble telescope's efforts were confined to the region 0.09 - 2.5 micrometers, or the visible spectrum.  To make this possible the Webb has a unique design shown in the top  diagram. The Webb telescope’s 21-foot mirror is comprised of 18 separate lightweight, hexagonal-shaped segments, which will unfold once the telescope is in space, according to NASA.

Named after a former NASA director who served during the Space Race in the 1960s, the Webb telescope was developed through an international partnership of NASA, the European Space Agency and the Canadian Space Agency. Scientists all over the world will be using its data cooperatively. The launch site  in Guiana was chosen because of its is location near the equator, where the Earth rotates faster compared with at the North and South poles.  This combined effect will  giving the rocket the extra acceleration needed to reach the point called 'L2'  one of 5 Lagrange points, named after the mathematician Joseph-Louis Lagrange, e.g. 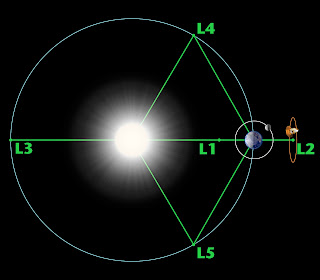 As seen in the graphic, three Lagrange points (L1, L2 and L3) lie along the line of centers connecting the two major bodies, in this case the Sun and Earth.  These are called "unstable" Lagrange points, while L4 and L5 are stable points.  All the points represent locations in space where the gravitational forces of a 2-body system (e.g. Sun-Earth) produce enhanced regions of attraction and repulsion. Locating a point of 'balance' means a spacecraft can then remain in position and reduce fuel expenditure.
The  L1 point is currently occupied by the SOHO (Solar and Heliospheric Observatory ) satellite.  In the case of the L2 point, the gravitational forces of Sun and Earth balance the centrifugal effect produced by the smaller body (Webb telescope) at the point.  Note the point is located 1 million miles on the opposite side of Earth from the Sun, and the Webb will need at least one month to reach L2 and unfolding its Sun screen which will face Earth and Sun at all times,  e.g. 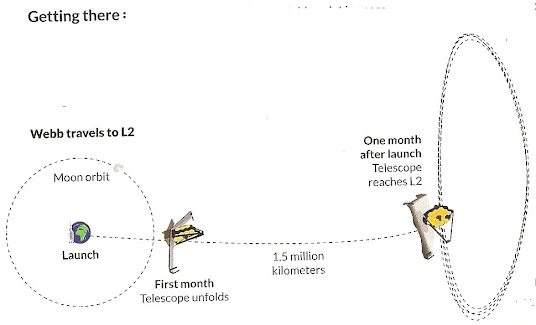 The phased transition of the Webb telescope to the L2 Lagrangian point.

The orbital period of an object here would normally be greater than the Earth's  (365.25 days) but the extra pull of Earth's gravity decreases the orbital period so at this L2 point it becomes equal to the Earth's. (By comparison, the Hubble telescope orbits at an altitude of roughly 375 miles above the Earth.)  Once at L2  the Webb will spend another 5 months turning on and testing its scientific instruments before collecting data.  This may seem like a long time, but a lot has to happen before it's fully functional, including:

-  The secondary mirror, which reflects light from the main mirror to the science instruments, unfolds.

-  Primary mirror segments begin to open and latch in place

- At 96 days after launch, the telescope reaches its final temperature of 40 K (-233 C) for the mirrors and near infrared system to function-  and just under 7K for the mid-infrared system.

- At 180 days the calibration of science instruments will be complete.

As gathered from the preceding steps, a major challenge will be keeping the telescope cool. It’s designed to observe distant  faint objects by detecting infrared radiation  (at 0,6 - 28.5  mm ), which requires an extremely cold operating temperature of hundreds of degrees below zero Fahrenheit.  A five-layer sun shield about the size of a tennis court will block and redirect heat from the Sun, Moon and Earth. Every shield layer is a fraction of a millimeter thick — about as thin as a human hair — and each subsequent layer is cooler than the one before it, with the space in between providing an insulating effect.

The telescope will send science and engineering data to Earth using a high frequency radio transmitter; it’s expected to begin conducting science operations about six months after launch, according to NASA.

Because the light observed is so far away, it’s also extremely old.  Because light travels at a fixed speed of 300,000 km/s,  observing distant objects in the universe means seeing them as they looked in the past.  Also, since the universe is expanding that light is stretched (toward the red end of the spectrum, or longer wavelengths) before it reaches our telescopes. For the most distant objects light that was originally emitted at shorter wavelengths is stretched all the way to the infrared.

The telescope will send science and engineering data to Earth using a high frequency radio transmitter; it’s expected to begin conducting science operations about six months after launch, according to NASA.

Astronomy and space enthusiasts can witness take off here: