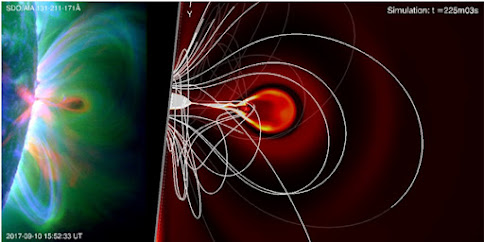 Sometimes it is possible that complex magnetic structures and motions,  e.g.

may not be necessary to trigger a solar flare, or even a coronal mass ejection (CME) related to it.   Now, a new model by Chaowei Jiang and his colleagues builds on a 1980s theory proposing that a single loop of magnetic flux pinned at both ends to sunspots on the solar surface could disrupt the stability of the corona and lead to a violent eruption.   This also makes eminent sense, and is indeed far superior to my complex magnetic model (which may still apply to more complex regions) as well as to the "dynamo loop" configuration of Kan et al, e.g. 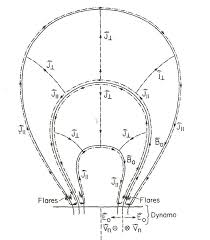 Which I criticized in a post a year ago for being too auroral-based:

The beauty of  Jiang's model is its simplicity.  Using China’s National Supercomputing Center in Tianjin, his team designed a magnetohydrodynamic simulation (see top image)  driven by slow rotational flow of the plasma at the Sun’s surface. They found that horseshoe-like loops of flux ballooned outward while remaining connected to the solar surface.

The horseshoe’s pinned sides sheared against one another, forming a sheet of electrical current. As the current sheet became thinner, the field lines pushed toward each other and then abruptly rearranged themselves in a way that converted magnetic energy into kinetic energy, a process known as reconnection. That reconnection drove the eruption.

A twisted rope of magnetic flux appeared only after the eruption had begun, dispelling the notion that it was a necessary precursor. On closer analysis, the researchers found that strong curvature in the newly reconnected field lines created a slingshot effect that resulted in extremely strong forces of magnetic tension directed away from the Sun. Those forces provided an efficient means of driving particles and radiation out into space, e.g.

In the sketch above, we are seeing magnetic field lines approach each other just before reconnection (left). The slingshot effect occurs just after reconnection (right). The newly reconnected field line is curved strongly, and thus has extremely strong magnetic tension forces, as denoted by the arrows. The force represented by the red arrow, which is pointing away from the Sun’s surface, can drive an eruption.

Key to the simulation’s success is sustaining the pinning of an untwisted loop at the solar surface long enough for a current sheet to form.   As Jiang et al also note, the morphology of the simulations is consistent with the structures captured by NASA’s Solar Dynamics Observatory. This  finding could lead to a universal model of solar eruptions and provide better understanding of how the phenomenon influences space weather.   See:  C. Jiang et al., Nat. Astron., 2021, doi:10.1038/s41550-021-01414-z.

Posted by Copernicus at 6:22 AM