The Latest JFK Assassination File Release: Why Were These 'Bombshell' Facts Omitted In What We Saw?

The Biden administration (via the CIA, National Archives)  on Wednesday released a batch of secret government files  related to the assassination of President John F. Kennedy, the latest incremental milestone in a decades-long push by assassination researchers  to have all of the documents about the former president’s untimely death declassified.  Well, don't hold your breath for anything substantial.  I already scanned a load of them and my reaction: Ho -hum. What's new other than recycling more Warren Commission-related  baloney, i.e. about the "Cuban threat" (from Castro) - already skewered in research circles, and the "threat" of Oswald in Mexico, etc.

The newly released batch of files, was posted by the National Archives and Records Administration here, and  included 1,491 documents, 958 of which are from the CIA. That latter tells you almost all you need to know, because we already can be clear the agency won't be releasing anything that exposes its own hand in the hit.

Also, this  is less than 10 percent of the 15,834 documents that had remained partially or mostly redacted before Wednesday.  Even Jefferson Morley, editor of JFKFacts.org and a former Washington Post staff writer, said he had not yet found anything earth-shattering but was still sifting through the hundreds of documents.  Well, I wish him well but advise him not to hold his breath looking for anything earth shattering. As I noted before, all the critical key files to shed light on this case have already been released, e.g.

Don't look for the CIA (which JFK threatened to smash into a thousand pieces) to deliver any genuine, unambiguous smoking guns on a silver platter - or by any other medium.

According to Morley a "key development in the release was that the  National Archives also issued a plan to digitize the entire collection of JFK assassination records".   Wow! But in any case this is neither here nor there if all we are going to get in the end are literal snippets related to the Warren Commission lone assassin bunkum, which avoid the central issues of who really organized the hit on Kennedy.   Anyone can digitize files replete with lies and disinformation - that doesn't prove diddly or squat.  The more genuine reaction by the savvy JFK researcher (or reader)  is that this batch of files is merely another episode of CIA slow -walking  in a sequence of stonewalling operations.

It is doubly clear to me, now more than ever,  that the CIA:

1) Doesn't want citizens to know that LBJ (architect of the Great Society) was also architect of the assassination. Indeed, the Warren Commission (WC)  was his own creation to deflect attention. Years later we learned how capable LBJ was of murder [1] , e.g.

2) The hit was not by Lee Oswald. Couldn't have been because Oswald wasn't even in any position to fire a weapon according to testimony the WC already destroyed (Testimony of Victoria Adams, who worked at the Texas School Book Depository and saw no one, no Oswald, racing down steps from the 6th floor)  Besides, the WC in test trials couldn't even replicate the alleged shooting with Oswald's purported rifle, e.g.

3) The actual hit was done by 3 trained sniper  teams using triangulated gunfire which had Kennedy trapped in a triangulated shooting zone in Dealey Plaza.  By contrast, any genuine lone assassin would have fired from a TSBD window overlooking Houston Street.

In all these file releases, of course, the CIA is betting most people don't do any digging beyond the most superficial. And they would bet correctly, because most people don't have the time to do that. For example, unearthing the CIA's own Handbook on Assassinations, e.g.

While the latest batch of file releases do touch on the secret plot to kill Fidel Castro, for example, there is no mention - zero-  of  how the plan (called ZR Rifle) was redirected to take out Kennedy in 1963. The proof in the pudding was the letter 'D' on Oswald's 201 file, indicating a CIA Staff D SIGINT or signals intelligence operation run in concert  with the NSA.  As pointed out by researcher Peter Dale Scott in Deep Politics Quarterly, January, 1994:

In 1961, when William Harvey headed Staff D, he was assigned the task of developing the CIA Assassinations Project, ZR/Rifle.

When ZR Rifle was altered from targeting Castro to targeting JFK, it was all over except for the triangulation of gunfire that took Kennedy out in Dallas.  The closest we likely got to who the actual shooters (mechanics) were was during the (1975) Church Committee hearings  Former CIA Director Richard Helms spoke at length about ZR Rifle in one session. When pressed, he identified two generic (i.e. for any purpose) hit team members by their code names: WI/ROGUE and QJ/WIN.  He described the former as   "a stateless soldier of fortune and a criminal" (Church Committee Report, pp. 43-44) .

and the latter he summarized in these terse terms:

"If you need somebody to carry out murder I guess you had a man who might be prepared to carry it out.”

More compelling still, the Committee established a direct link between Helms and William Harvey, via a February 19, 1962 memorandum  from Helms to Harvey regarding QJ/WIN.  Were either QJ/WIN or WI/ ROGUE or both in on the JFK hit?  It's very likely but we will never know for certain given the CIA is bound to keep any such files totally hidden until...most current researchers die off.    At the same time, ask yourself if any of those files would be among the batches released given what's at stake for exposure of the CIA's methods. (Never mind the preceding link to the Guatemala operation brings out the details to a tee.)

As for Oswald's CIA files (201-289248 CI/SIG, and 74-500) the Warren Commission was suspiciously quiet about them and so is the CIA in these incremental releases. WHY?  Of all the millions of new files released so far since 2017 why have we only Prof. John Newman's records (1993 book, 'Oswald and the CIA') ? (Obtained via FOIA requests).

As for all the patter about Oswald, Cuba, a possible Castro conspiracy (maybe with Russia), all the astute reader needs to know is contained in this document called the Katzenbach memo, released years earlier:

As for Sylvia Duran, none of the released documents comes clean on what happened to her, only the standard CIA narrative - i.e. denying she was tortured or anything of the sort. But it took the later HSCA investigation to break through, finally. Learning that Ms. Duran was the only witness able to confirm that the Oswald encountered at the Cuban Embassy in Mexico City was not Lee Harvey Oswald, but a heavy set pretender using his name, eg. 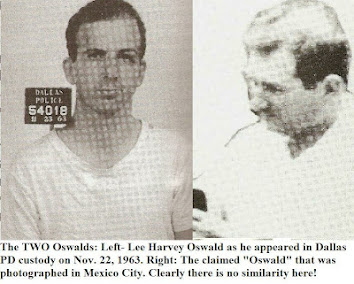 For being so honest in dispensing with the 'Oswald in Mexico City' BS,  Ms. Duran -  as HSCA investigator Gaeton Fonzi reports (The Last Investigation, p. 409) was brutally tortured for eight hours by Mexican police (likely at CIA behest) to get her to recant  her claim of the fake Oswald.  Assistant HSCA investigator Ed Lopez - as reported by Fonzi- attempted to interview Duran in the wake of her ordeal but "found she broke down and wept merely at the thought of it. She also feared reprisals as a citizen of Mexico."
But you won't see any of this in the files released yesterday. Nor will you see one hint, one minor clue of the fake CIA cables confected by CIA Station chief David Atlee Phillips,

David Atlee Phillips, who conducted the main operation to frame             Oswald - from Mexico City and the Miami JM/Wave CIA station.

As Phillips' machinations came to light, i.e. in Deep Politics Quarterly, we also learned the extent to which the CIA sought to conceal the Oswald CIA files from the Warren Commission.  Also, the particular significance of the letter 'D' on Oswald's 201 CI/SIG file. Why be surprised when we already know CIA asset George Joannides was attempting to run interference in the HSCA investigation?  We also know, from HSCA investigator and author Gaeton Fonzi,  that CIA security rep Regis Blahut was found to have his fingerprints on the JFK autopsy photos that the HSCA was examining. After failing three successive polygraph tests,  Blahut blurted to a reporter [2]:"There are other things involved that are detrimental to other things.":
Go figure!  But beyond figuring, we need to ask why all the preceeding 'bombshell' facts were not evident in the files just released?  Who is terrified of revealing them, and why?

Most of the curious people and serious researchers will keep on hoping and looking as these assorted files are released (or rather allowed by the CIA to be released) in dribs and drabs, but as I've noted in multiple posts the incriminating stuff is already out there - just not in neon lights. Determined people have to dig it out in multiple places and also use their own damned eyes to sort out fact from fiction. Namely the fact Oswald could not have fired a head shot from the Book Depository that ripped open the REAR of Kennedy's head.  That had to come from the front.

Never mind, the CIA will keep the wheels spinning as they play for time with these almost useless  redacted and distracted releases. Oh, and play hide and seek with those genuinely searching for final answers.

But the answers are already out there. Just don't look for the agency that cooperated in the hit to provide them!  What you are reading in this post includes  multiple facts unearthed from reliable sources any reader can get, without depending on the CIA or National Archives to do the right thing.

[1]  As reported in The Dallas Morning Herald  (March 23, 1984) , Billy Sol Estes linked Johnson and two others to the slaying of Henry Harvey Marshall.  Marshall was a USDA official in charge of the federal cotton allotment detail,  killed because he had attempted to link Estes’ nefarious dealings to the then Vice-President - who feared the disclosure would exclude him from the 1964 ticket.