"Will this institution survive the stench that this creates in the public perception that the Constitution and its reading are just political acts? I don't see how it is possible.”-   Justice Sonia Sotomayor, Wednesday - on possibility of Supreme Court overturning Roe v. Wade

As anyone paying attention is aware, on Wednesday the Supreme Court heard oral arguments in a case (Dobbs v. Jackson Women’s Health Organization) asking the court to uphold a Mississippi law that would ban almost all abortions after 15 weeks of pregnancy. Less appreciated, is if the court allows the Mississippi law to stand, they would effectively be overturning Roe and the fundamental right to have an abortion until the point of viability about 24 weeks of pregnancy.  This is despite the fact in a previous SC ruling 24 weeks had been adopted as the standard.  What gives?

Well, the bodily autonomy of a woman. Either she has autonomy and control of her body, OR she can be forced into being a receptacle for a conglomeration of protoplasm growing inside her that she doesn't want.  And no, the moron, religious extremist Amy Coney Barrett's solution, i.e to just have the baby and then drop it at a church door- is not one any sensible woman would want. Especially if she was unfortunate to be carrying a rapist's seed.

So if the right to  a woman's bodily autonomy - the right to choose to terminate a pregnancy  in this case - is taken away, then effectively what one has is a de facto regime of forced pregnancy. This is a goal the hypocritical  conservative douches have been fighting for over literal decades.   These are the same moralistic little miscreants who yap endlessly about the "sanctity of life" but won't lift a finger to help pass one damned bill to allow paid parental leave for a mom to care for her child, OR allow state-supported child care or health care.

But make no mistake, if the Court rules in Mississippi`s favor, that right to bodily autonomy  - which has existed for nearly 50 years under Roe - would be wiped out for millions almost immediately.  This is given that 22 states already  have laws on the books that would outlaw abortion all in most cases. And most of these so-called trigger laws are designed to go into effect if Roe is gutted.  Given this, Justice Sotomayor is correct that if that occurs while Roe will be gutted, so will this Supreme Court -which will lose its credibility and legitimacy in perpetuity.  It will have accreted a fecal stench of political activism that never existed before the "libertine" Trump appointed his pet pawns: Amy Coney Barrett and Brett Kavanaugh.

Irin Carmon, Senior Correspondent for New York magazine, hit the hail on the head Wednesday night on All In, when she remarked:

"So as you mentioned, the conservative legal movement made a deal with a buffoonish libertine on the theory that it would get them closer to imposing traditional gender roles by forcing pregnancy and birth."

The 'buffoonish libertine' is, of course, Donald Trump - who has about as much moral standing as Jeffrey Dahmer before he started eating his victims and stacking their heads in his fridge in Milwaukee. Hell, we already know he was getting spanked by Stormy Daniels even as his wife - Melania- had to deal with her newborn, Barron, e.g.

Report: Stormy Daniels Once Claimed She Spanked Trump With a Magazine (thedailybeast.com)

So the fact this walking turd could appoint three "moral" justices  (Kavanaugh, Coney Barret, Gorsuch)  to the Court to overturn Roe is a howler of the first magnitude. (And yeah, I believe Ms. Daniels over a guy that had reeled off 30,000 + lies (including about the coronavirus) by the time he was forced out of office.  Hell, I also believe former M16 spook Christopher Steele that the orange maggot probably let the two  Russian whores urinate all over him after they sprayed the bed that Obama and Michelle had slept in at the Moscow Ritz-Carlton some years before.  No one who hadn't participated in such an incident would be saying in public: "Ya know, I'm really not into golden showers!"

Then you shouldn't have had to say it!

On a more serious note, a warning shot for the midterms ensues if  the Supreme Court abases itself and overturns a near 5 decade old constitutional right.  Yeah, it IS constitutional because it falls under unenumerated rights covered in the Ninth Amendment. (Read Garry Wills book: ‘A Necessary Evil: A History Of American Distrust of Government’,  the chapter, 'Constitutional Myths', p. 108)

Again, and for the nth time, this is not about "pro life" or "sanctity of life".  Not at all. The Repuke extremists are quite content to let poor infants starve to death by removing funding for Medicaid and the SNAP program to divert it to the Pentagon- as our Colo. Rep. Doug Lamborn wanted to do back in 2014.  Nor did these rats give two craps about spreading Covid to oldsters during the height of the pandemic a year ago.  (Recall TX Lt. Gov. Dan Patrick saying seniors ought to sacrifice their lives for the economy, e.g.

Texas Lt. Governor: Old People Should Volunteer to Die to Save the Economy | Vanity Fair

So spare me evangelical hypocrites' balderdash for not taking a word they say about being pro-life seriously.   Especially given they are following the lead of a confirmed libertine, serial sexual assaulter and deviant.  Let's clear away all the distraction and brain scrapple. Former Ethics professor Chery Mendelson nailed what is at the root of this pro -life B.S. in her book, 'The Good Life', e.g. p. 157:

The premoral mind confuses the disgusting with the wrong and retains an infantile fear of things sexual. Its rationality is overcome by emotion, fantasy, wish and projection. The belief that extracting a 10-week fetus from a woman's womb is murder rests to a large extent on the sense of disgust aroused by the thought of destruction of living tissue.
When fundamentalists insist on risking the life of the mother to deliver an anencephalic fetus they take this tendency to an extreme. People who think this way are unable to override disgust with rational appreciation of the objective characteristics of the fetus. The ability to do so is an indispensable trait of the moral mind.

Nature sloughs off early pregnancies at a high rate and we do not hold funerals for these embryos and early fetuses.  As many as 60 to 70 percent of fertilized eggs are lost overall, usually silently - without anyone ever knowing fertilization took place. Up to 15 percent of known pregnancies miscarry in the first trimester. Were we to take seriously the morbid pseudo-moralism of the fundamentalist Right, we would recognize these countless millions of miscarried embryos and fetuses as lost lives and be sunk in a vast and permanent sea of endless mourning for the unending deaths of innocents.

Ultimately this isn't about life and neither will any SC ruling that kills Roe. It is about exercising authoritarian power over women, basically fulfilling the old Nazi aspiration: keeping their women pregnant for the state - churning out future consumers and soldiers.

This ought to be a warning shot over the bough of all  sentient American women, energizing them to turn out by the tens of millions for the midterms next year.  It is particularly vile given it will affect mainly the poorest women - often minorities - in the backward red states.  They will then have to either go it alone or try to access an abortifacent (pill).  As for the "state's rights" claim - turning over the legal issue to states - that is also codswallop.  As Wills has pointed out (op. cit.) states have prerogatives, not rights.  Only flesh and blood people have rights.  As he also writes (p. 108):

The states have no natural rights. Their powers are artificial, not natural – they are things made by contract

Understanding all this is essential in preventing the fascists from wrecking this country, which my own ancestors fought for in the American Revolution, e.g.

Brane Space: What Would My Revolutionary War Ancestors Think Of Our Nation's Present Predicament? (brane-space.blogspot.com)

Thus every effort must be made to prevent the Authoritarian fascist traitor snakes from seizing control of our government.  That also goes double for 2024, and especially to ensure the golden shower autocrat narcissist Trump can't sneak back in again!

Republicans
Next Up On GOP’s Agenda: Stripping Women Of Political and Economic Power 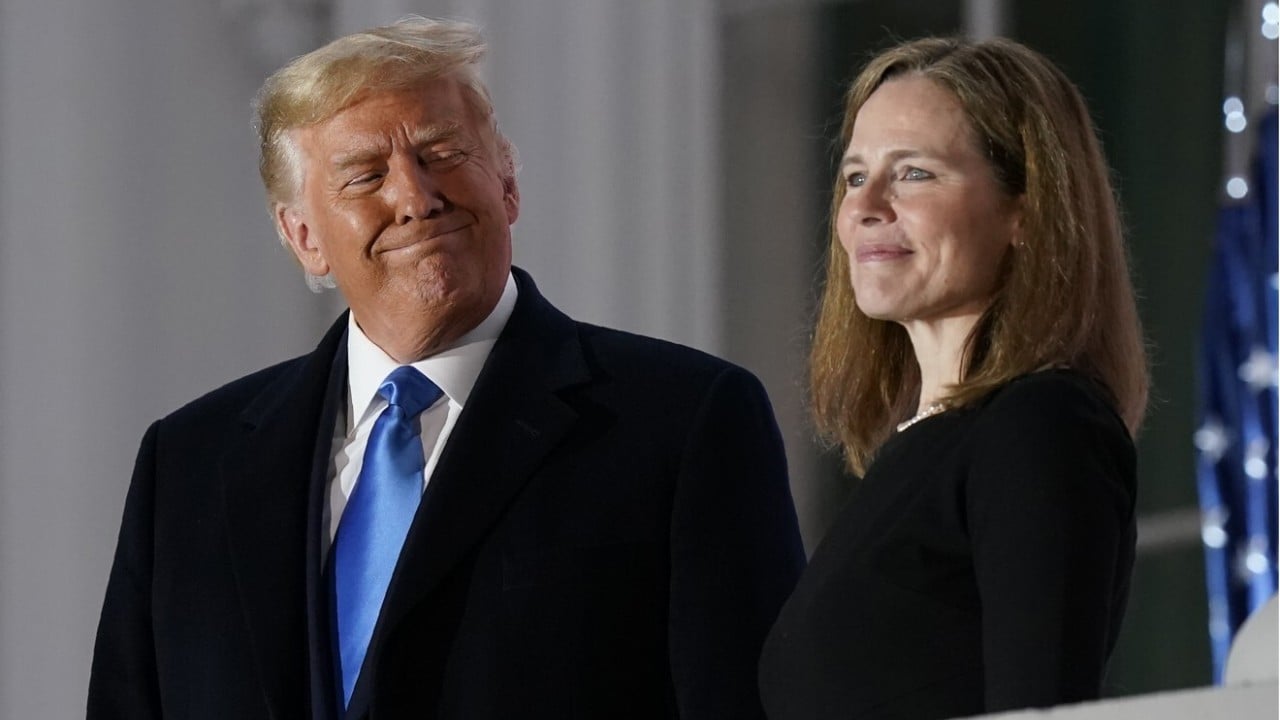