The Plasma Physics Of Radio Astronomy (3) 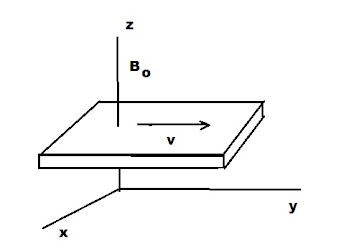 The previous entry (Part (2)) assumed the presence of a low density plasma in which collisions are not important.  In addition while a magnetic field (B) was present it was not variable in the sense of being mechanically moved or displaced.  In this post we consider a layer of a conducting medium with an applied magnetic field which is moved or displaced.  No incident waves are considered but rather the effect of the motion of the medium in generating a disturbance or a wave.  The waves produced by such motion are known as magnetohydrodynamic waves.

Consider a slab in a conducting fluid such as shown in the top diagram. which is ,moved with a velocity v in the y -direction.  The slab is taken to be infinite in extent  in the  + y direction.  A steady magnetic field  B o   is applied in the z direction. Since v is in the y direction and B o  is in the z-direction we have from the relation:

That an electric field E  will be induced in the x -direction by the motion. (Refer to Part (1)) This field produces a current in the slab in the x direction which has its return paths through the medium above and below the slab. This current, in turn, produces forces which tend to impede the motion of the slab but which also imparts an acceleration to the fluid   above and below the slab in the y direction.  Hence, the original motion initiates motion of the fluid which propagates as a wave parallel to the magnetic field.  The applicable equations become:

Equations (i) and (ii) are Maxwell's curl equations, while (iii) is a form of Ohm's law for plasma involving the current density.  The equation (iv) is known as a constitutive relation describing the medium  and (v) is a hydrodynamic equation with the dimensions of acceleration.

Introducing the expression for E x into the above we get:

Note: We assume here that  Ñ p  (grad p) can have no component perpendicular to z.  Now, let  ¶D / ¶ t << J and   introduce eqn. (i) into the preceding equation to obtain:

Eliminating  v y  between eqns.  (vi)  and (viii) we obtain a wave equation:

Note that for very large conductivity, s , the last term can be neglected.   The velocity of the wave is then given by the Alfven velocity:

B o  is the magnetic flux density in webers m-2

m  is the permeability of the medium in henrys m-1

1) Evaluate the Alfven velocity for the solar photosphere given: