Perhaps The Strangest Supernova: One That Re-Explodes


Light curve for the exploding star designated iPTF14hls (yellow) and the light curve (blue) for a normal  Type II supernova.

Imagine an astrophysics class and the lecturer asks: "What could possibly be the strangest supernova you can imagine?"   One student might actually chirp up: "Well, one which explodes and then leaves two cores behind, one forming a neutron star, the other a black hole."

Of course, such a scenario is preposterous because it ignores all the fundamentals of stellar physics and stellar evolution. To wit, collapsing stars in the throes of a supernova never leave behind two cores, only one. It's either a neutron star or black hole, not both. But one answer that might be deemed equally implausible is that of a collapsing stat that re-explodes, never reaching the climax/

This acknowledges that a normal supernova - or exploding star - is a one off event. The star explodes, it's dead, it's done, finito. The layers ejected from the event then also cool and expand, leading to a "supernova nebula" such as the Crab Nebula, e.g. 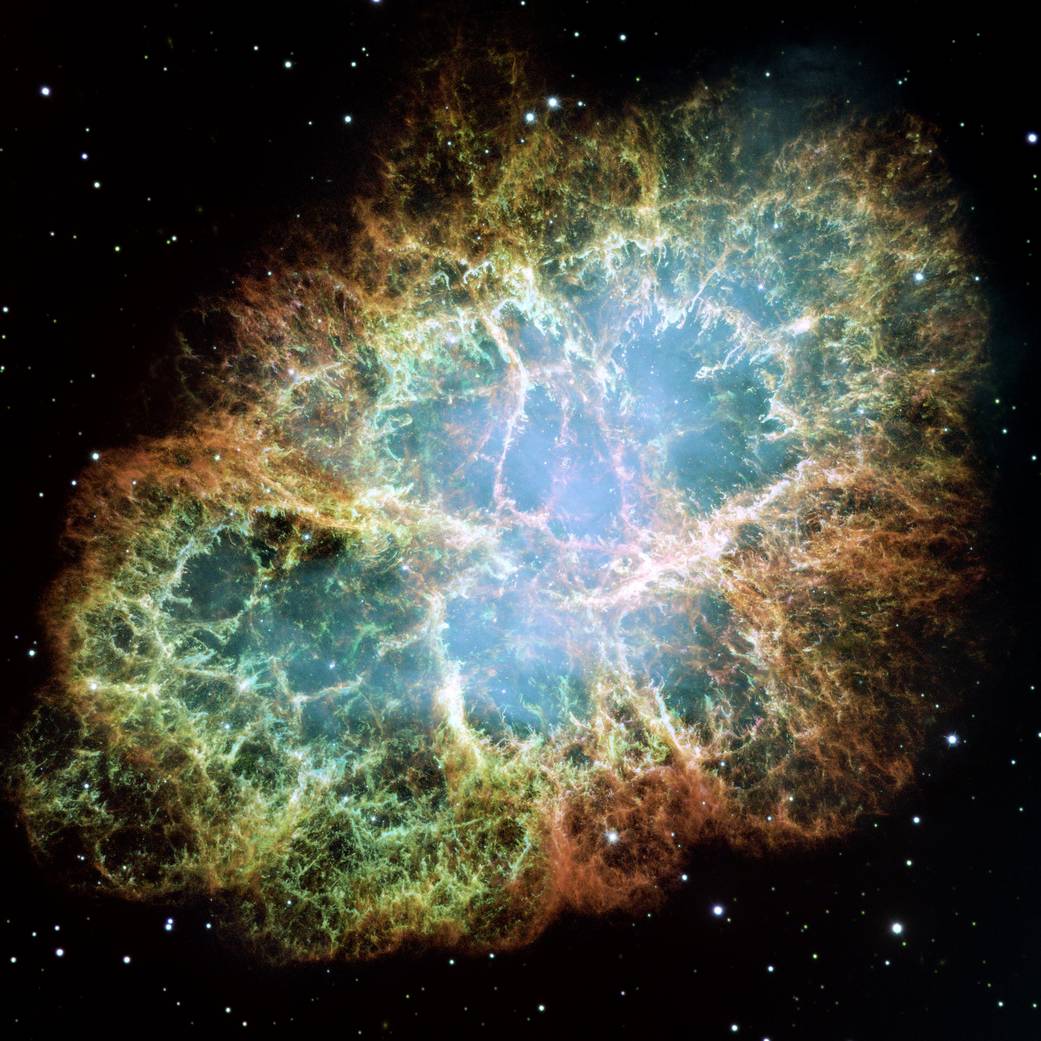 This was the result of a supernova explosion observed in 1054 A.D. and which left behind a highly compact neutron star or pulsar.

But in the actual case of the star  iPTF14hls, there is no definitive ending explosion, say leading to either a neutron star of black hole. In the word of astrophysicist Iair Arcavi:

"A supernova is supposed to be a one time thing - the star explodes, it's dead, it's done. This is the weirdest supernova we've ever seen ...it's like the star that keeps on dying."

The star was discovered in September, 2014 at Mt. Palomar Observatory and at the time it looked like a typical Type II supernova in a galaxy 500 million light years distant.   Typical type II origin stars reach masses up to 50 times that of the Sun, and glow for 100 days before starting to dim. The first sign that iPTF14hls was unusual came a few months after its discovery, when it started growing brighter. This turned out to be one of five irregular cycles of brightening and dimming.

Stranger yet, data collected from Sept., 2014 through June, 2016, show that the supernova remained bright for more than 600 days.  By December of 2017 the eruption just showed signs of winding down.  Normally, layers of gas ejected from a star in the throes of a supernova slow and cool as they expand. But iPTF14hls maintained a high temperature between 4700 and 5700 Celsius for the entire time it was observed. Moreover, its outer layers didn't slow down as they should have. 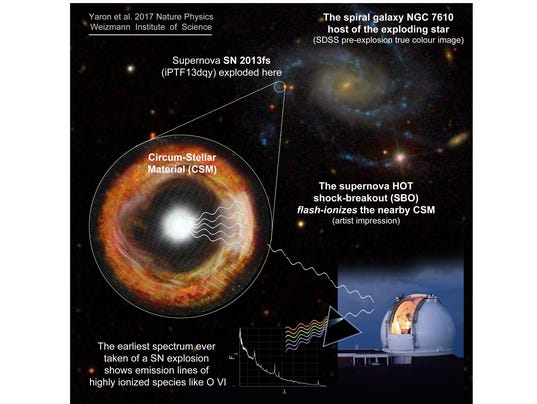 The artist's sketch above depicts the normal sequence of events for this type of supernova.

What about theories to account for the anomalous behavior of this supernova?  Well, at least one suggests that those stars with masses in the range:

where Ms   denotes "solar mass",  can explode several times in succession. (Though these types of cyclic star deaths have never been seen before).   The basic idea behind such models is rooted in the basic equations governing stellar structure, e.g.

The binding or total energy of a star ET is:

where G is the Newtonian gravitational constant, M is the stellar mass and R is the radius. V is the potential energy and K the gas kinetic energy.

Thus, the total energy of a star is negative and equal to half the gravitational potential energy or the negative of the gas kinetic energy.

where  r   is the density of the stellar material, P the pressure and   g  the ratio of specific heats.  Further, we can write:


Basically then, in the case of a potentially collapsing stellar mass,  we need the internal energy U to be large enough to counterbalance the negative of gravitational potential energy:  - W=  GM2/ 2R .   We suspect the internal energy arises from a heating effect whereby gamma rays are converted into electrons and their antimatter counterpart, positrons, e.g.


Without sufficient internal energy the core collapses and gets hotter. This vastly additional heat would then trigger a partial explosion in which the star blows off a large amount of gas.  But....after the explosion - lo and behold - the electrons and positrons recombine into gamma rays, e.g.

This also generates internal energy and helps to prevent the remaining stellar core from collapse.  This cycling reaction, we believe, enables the star to blow off mass several times before finally ending in a supernova flash.   Ultimately, given the initial mass (see the mass range provided earlier for iPTF14hls)  the remnant core from such a supernova would collapse to a black hole of mass   40  Ms.


The problem with the above theory, neat as it appears, is that it also predicts the star will expend all its hydrogen in the first explosion.  That doesn't comport with iPTF14hls which expelled an equivalent hydrogen mass of   50  Ms   in  2014.  (The amount of energy released in the most recent explosion is also greater than it should be).

Even more mysterious?  Palomar Observatory photographic plates show yet another birght burst from the same part of the sky in 1954.  This indicates a star that's exploded multiple times over a more than 50 year period.

"Zombie" star? Maybe this is one that merits the name.. Strange? You bet.