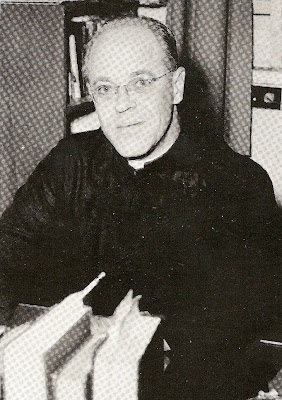 Father Elwood P. Hecker,, S.J.  from the Loyola Wolf - 1965 Yearbook. He encouraged us (in theology class)  to treat biblical accounts critically - not to simply imbibe them - especially the Easter story.

As we’re now approaching the Easter weekend, it’s a good time to be more critical and maybe parse that narrative of the death and resurrection of Yeshua. To be truthful, even when I was still  a practicing Catholic at Mgsr. Pace High, the Easter narrative bothered me. The timeline, as well as the behavior of the main personae didn't seem to make any sense. The teaching Marist brothers also weren't much help, content to just fob questions off with "Take it on faith. Not everything in the good Book can be subject to logic or reason."

Why not? Well, maybe that's why I became an atheist.
One of the first puzzling passages one encounters is Matthew 28:2, which takes up the story after the crucifixion and after two women arrived at the tomb. We read therein:
"And, behold, there was a great earthquake: for the angel of the Lord descended from heaven, and came and rolled back the stone from the door, and sat upon it."

"And they said among themselves, Who shall roll away the stone from the door of the sepulchre? And when they looked, they saw that the stone was rolled away: for it was very great."

Meanwhile, in Luke one finds:

"And they found the stone rolled away from the sepulchre."

Can't these scribes  of the synoptic gospels agree on anything? But wait!  Maybe we can arrive at a supermajority for truth! John concurs with Luke: No earthquake, no rolling stone. It is a three-to-one vote: Matthew loses. Else the other three are wrong. If logic rules then an event cannot happen both before and after the key subjects arrived.

Now, some bible defenders may assert that Matthew 28:2 was intended to be understood in the past perfect, i.e. showing what had happened before the women arrived. But the entire passage is in the aorist or past tense, and it reads, in context, like a simple chronological account.

If tenses of assorted verses can be so easily shuffled around, and believers can be so gullible as to rationalize them all, then what is to keep them from putting the flood before the ark, or the ascension before the resurrection ? Heck, they can do anything they want!

Consider an additional  problem: the fact that in Matthew the first post-resurrection appearance of Yeshua  to the disciples happened on a mountain in Galilee and not in Jerusalem as most Christians believe. Note the prediction by the angel sitting on the newly moved rock:

"And go quickly, and tell his disciples that he is risen from the dead; and, behold, he goeth before you into ; there shall ye see him."

Assuming the angel was delivering the message of God this had to have been of supreme importance. Jesus- Yeshua had even predicted this himself sixty hours earlier, e.g. during the Last Supper (cf. Matthew 26:32). Later, according to(Matthew 28:16-17:

"Then the eleven disciples went away into , into a mountain where Jesus had appointed them. And when they saw him, they worshipped him: but some doubted."

Reading this at face value, and in context, it’s clear that Matthew intends this to have been the first appearance. Otherwise, if Jesus had been seen before this time, why did some doubt?

We further find that Mark agrees with Matthew's account of the angel's Galilee message, but delivers a different account of the first appearance. Meanwhile, Luke and John give different angelic messages and then radically contradict Matthew.

Luke relates that the first appearance is on the road to Emmaus and then in a room in Jerusalem. John, however, says it happened later that evening in a room, minus Thomas. These angel messages, locations, and travels during the day are impossible to reconcile. But who’s looking, or asking?  As Fr. Hecker put it in one of our Loyola Theology classes "I warrant not too many!"

Such contradictions don’t prove that the resurrection didn’t happen, but they do throw considerable doubt on the reliability of the supposed witnesses. Some of whom were flat wrong. Maybe they were all wrong. Let us also not forget Thomas Paine’s famous words (in The Age of Reason):

All of which points up the need for judicious use of  biblical exegesis to scrutinize ancient words as opposed to blindly accepting them.

An ongoing problem that consistently emerges is that many who purport to have mastered exegesis have often omitted textual analysis as part of it, which also requires familiarity with one or more languages, in particular Latin, and Greek. Thus, a person versed and educated in these languages will be better able to at least parse the Latin Vulgate form of early biblical texts, and also make forays into the Greek Septuagint. (Both of which we had to do at Loyola.)

By using such language skills to examine then compare earlier and earlier texts, one is then in a position to identify errors and obvious mistranslations without having to have the original texts as references. Hence, one can reliably deduce where errors have been made and also where they've  propagated on the basis of simple deduction. Again, this is once inconsistencies are exposed.

As an illustrative example: Half of the oldest manuscript witness texts, including a Bodmer papyrus, the Vaticanus and Beza’s Codex omit the sentence in Luke 23: 34 which purportedly contains the "last" words of Jesus. This level of uncertainty in the textual tradition means the interpretation of the passage was a subject of serious debate. Put briefly: half the witnesses insisted Jesus begged God’s forgiveness for “them”.  The other half pretended to know nothing of the “Eloi, eloi lama sabacthani” prayer. What gives?

How can the divergences be reconciled? The conclusion of textual analysts is that the passage is probably bogus and a later addition. Why say so? Because the earliest Greek witness papyrus (called P 75 - which dates back to 200 AD) has no such content. However, the prayer can be found in Codex Sinaiticus and a large range of mss. produced in the Middle Ages. Again, the comparison of earlier mss. with much later ones (in the Middle Ages) shows prima facie evidence for alteration of text in the later epoch. We don't need any special inspiration to inform us of this, once we arrive at it using simple logical inference, i.e. deduction!

Another example is the verse from Matthew 25:46:“And these shall go away into everlasting punishment: but the righteous into life eternal". This verse (which I've commented on before)  is critical because it's the only one in the whole good book that has the two words "everlasting" and "punishment" in the same sentence. Thus, the entire concept or claim of "everlasting punishment" rests on the validity of this single verse.

But is it valid? Not when one applies the Greek translation (from the Greek Septuagint), emerging as:"kolasin aionion” or punishment for an aeon. Now as anyone even without Greek language skills knows, an aeon never has been nor will it ever mean "eternal". Thus, one can legitimately conclude that later scribes and copyists deliberately inserted their own version to bend the scriptures to their own agenda.

What is the optimum way to take the Bible’s assorted books, and especially the Gospels? Catholic Scriptural Historian, the Rev. Thomas Bokenkotter, in his monograph,  A Concise History of the Catholic Church put it thusly (page 17):

"The Gospels were not meant to be a historical or biographical account of Jesus. They were written to convert unbelievers to faith in Jesus as the Messiah, or God.”

Further, what we have from Rev. Bokenkotter is a de facto admission that no historical support exists for any of the accounts in the New Testament. Indeed, if they "were not meant to be historical" (or accurate), then we cannot be sure if any are! Quite possibly, none of the accounts should be taken seriously.

This is also a good reason to interject once more that interested readers ought to avail themselves of the easily accessible online course, Introduction to New Testament History and Literature by Prof. Dale B. Martin of Yale University. (Roughly on a par with my 'Introduction to the New Testament' course taken at Loyola in 1964-65. ) The compilation of course sessions, all on video, can be accessed via this link:

I also recommend - for those short on time - Lecture No.13, dealing with the "Historical Jesus" (link below):

Enjoy your Easter, believers, but do try to be aware of the pitfalls in taking events too literally as recounted in the Synoptic gospels!
Posted by Copernicus at 10:35 AM