Question: Could you explain the concept of a binary star system and how we get its orbit parameters correctly oriented to our view?  (Since the system is not likely to be in the plane of our viewing axis initially)  Also,  how  might one find the mass of each, say for a specified binary system?

Below I sketch a basic binary star system for reference: 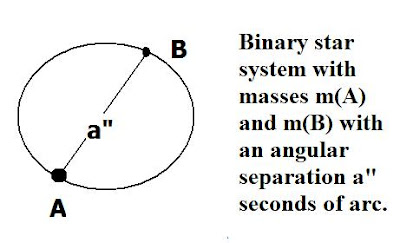 Then the sum of the masses of the two stars is given by Kepler's  3rd law:

where P is their period. Of course, obtaining the total mass is only the first step. One then wishes to obtain the individual masses for each star. This is done by analyzing the motions of each member with respect to the center of mass of the system which ordinarily will be apart from either member. For example, if m(A) = m(B) then the center of mass (cm) will be exactly midway between them. Consider the visual binary system for Sirius composed of Sirius A and B. The semi-major axis of the true relative orbit is observed to be  7½" and the distance from the Sun to Sirius is 2.67 pc. If the period of the Sirius binary system is 50 years and the component B is found to be twice as far from the center of mass as component A, then we can compute the mass of each component.

We first obtain the total mass from Kepler's 3rd law:

Basically, in working any binary star problem, say to get the relative masses, one needs to take care the units used are consistent, and also that Kepler's 3rd law is applied in the correct format.
Posted by Copernicus at 4:24 PM