"He (Bolton) is not only a hawk, he's extremely reckless. He believes in going to war first, and diplomacy second. Having him as the National Security adviser would be a terrible situation and put us into a likely nuclear war. He could go after North Korea and that would result in millions of people being killed and I wouldn't put it beyond him to drag China and Russia into it."- Richard Painter, last night on All In.

For those too young to register it the 1964 film 'Dr. Strangelove',  starring George C. Scott and Peter Sellers, featured an unhinged United States Air Force general ("Jack D. Ripper") who orders a first strike nuclear attack on the Soviet Union.. (Ripper  believes the Soviets have been using fluoridation of United States water supplies to pollute the "precious bodily fluids" of Americans.)  The film revolves around the various efforts of the sane contingent  to try  to stop the madman's plans which include dispatching a B-52  with a hydrogen bomb- and ordering radio silence. In the last scene Major T.J. Kong rides the bomb down to its target like a rodeo bull until detonation, e.g. 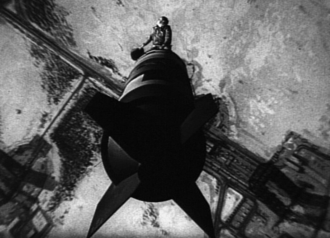 That story was a farce depicting the folly of nuclear weapons and the greater folly of irrational men who might be controlling their use (including the codes to the nuclear football) - in this case a pre-emptive strike setting.  Alas, with the appointment of John Bolton as Trump's new National Security adviser  yesterday, we may be seeing the beginnings of a play that ends not too differently from Dr. Strangelove. To  sum up, Bolton's basic philosophy translates to "bomb first - preferably with nukes - and talk later."

Which brings us to Bolton's justification for pre-emptive strikes as laid out in his recent WSJ op -ed,''The Legal Case For Striking North Korea First'.

Seldom in human history are malignant intentions and vile future acts telegraphed in blunt terms. The problem is too many of us are too preoccupied - often with irrelevant fluff and nonsense - to take note when it happens. Because we ignore the warning shots over our existential bows, we pay dearly for our nonchalance later. Such was the case after the publication of Hitler's 'Mein Kampf' in which he literally laid out in black and white his foul plan to exterminate the Jews   But too few took note at the time, and read the warning signs mostly after the fact.

Let us carefully note here that if this psychopath were to follow through on his plan, many millions more would perish than  all the Jews who died in Nazi gas chambers.

Without being hyperbolic with rhetoric,  let me try to impress upon readers the gravity of the situation and why Bolton's nuclear strike document - which is what it really is - ought to scare the bejeezus out of any sentient person.

“I can’t see him following through on this and that is the problem with the brinksmanship policy. Because you’re putting yourself in a bind. You will either have to back down and lose credibility or you are stuck on a ledge with a military option which is very, very risky.

North Korea is not Syria. It’s not Afghanistan. It’s going to have very devastating consequences.  North Korea will retaliate to any kind of military option. They will retaliate against South Korea given seventy percent of its ground forces are deployed within 100 kilometers (60 miles) of the DMZ.  And there’s twenty thousand U.S. military in South Korea and twenty million people in Seoul”

She was warning that any U.S. first attack would assuredly incept a powerful counter attack that would  wreak havoc on Seoul, South Korea – with the potential to obliterate over 20 million people as well as all U.S. troops stationed in S. Korea.  She was referring to more than 10,000 artillery pieces capable of hurling shells into Seoul bearing not only sarin nerve agent but biological weapons such as anthrax, Ebola, smallpox and cholera.

While the U.S.  has focused on the North's nuclear capability, there has been little mention of this formidable conventional arsenal.  Nor has it evidently been on Bolton's radar or he'd have been more circumspect with his op ed.  He simply appears not to have processed that even if a first strike were to eliminate the North's nuclear missiles, it would barely scratch the surface of its highly fortified artillery. Worse, such a foolhardy strike could also draw in the Chinese and even the Russians. At the end we could be looking at a full, all- out thermonuclear war with more than 9,500 hydrogen weapons exchanged.  It's difficult to get a sense of what such a war wold look like but this clip from the 1984 Brit film 'Threads' gives some idea, e.g.
https://www.youtube.com/watch?v=MrHoMSRZOS4

Watch it then watch again- especially the last 2 minutes of the clip-  to see what we may be in for with this goddamned lunatic.

What is especially unnerving in his WSJ piece is how he justifies a pre-emptive strike on the basis of what is am "imminent" threat, predicated on an 1837 'test of necessity' formulated by Daniel Webster.  Webster's test referred to when British forces invaded the U.S.  to destroy the steamboat 'Caroline' in 1837. It had been used by Canadian rebels to transport weapons into Ontario.

Webster argued that Britain had failed to show 'the necessity of self-defense was' instant', leaving no choice of means and no moment of deliberation.

Bolton, having set the premise up then writes (ibid.):

"Would an American first strike today against North Korea's nuclear weapons' program violate Webster's necessity test? Clearly not. Necessity in the nuclear and ballistic missile age is simply different than in the age of steam.....In 1837 Britain unleashed pre-emptive 'fire and fury' against a wooden steamboat. It is perfectly legitimate for the United States to respond to the current necessity posed by North Korea's nuclear weapons by striking first."

Missing in Bolton's "necessity" doctrine is any element of ethics or basic morality. Namely, that he is fully willing to sacrifice 20-25 million South Korean lives to justify this perfidy under the banner of some abstract "Caroline criteria" argument. Effectively doing so merely because North Korea possesses  weapons that might hit the U.S. Bolton also appears never to have learned the most fundamental lesson of basic morality: the ends never justifies the means.


(a) Crimes against peace:

(i) Planning, preparation, initiation or waging of a war of aggression or a war in violation of international treaties, agreements or assurances;

(ii) Participation in a common plan or conspiracy for the accomplishment of any of the acts mentioned under (i).

Violations of the laws or customs of war which include, but are not limited to, murder, ill-treatment or deportation to slave labor or for any other purpose of civilian population of or in occupied territory; murder or ill-treatment of prisoners of war or persons on the Seas, killing of hostages, plunder of public or private property, wanton destruction of cities, towns, or villages, or devastation not justified by military necessity.

Murder, extermination, enslavement, deportation and other inhumane acts done against any civilian population, or persecutions on political, racial, or religious grounds, when such acts are done or such persecutions are carried on in execution of or in connection with any crime against peace or any war crime."

So Bolton's claim of "legaality" for his first strike is total bollocks.

As Richard Painter, former ethics adviser to George W. Bush put it last night.: "We already had one hothead now we have another hothead who believes the same crazy stuff." Sen. Chris Murphy was even more specific noting Bolton advocates for a first strike on the North for the "mere possession of weapons that might hit the United States" adding, "that is a Pandora's box."

Bolton, of course, is also willing to scuttle the Iranian nuclear deal.. Bolton's appointment, then,  is also the latest in a long series of signals Trump has sent in recent months that he is determined to take the U.S. out of the 2015 nuclear deal with Iran. This despite strong protests from European allies, as well as Russia and China, who are join signatories to the deal.  Bolton himself Bolton published an open memo on how to “free America from this execrable deal at the earliest opportunity”.

Some conservatives close to the White House had argued that Bolton was too hawkish for Trump, and that his foreign adventurism would detract from Dotard's“America first” strategy of concentrating on creating U.S, jobs and cutting immigration. But it is now apparent that Trump - increasingly besieged by the Mueller investigation into his campaign’s contacts with the Kremlin- aims for reckless military distraction and asserting U.S. might abroad.

Having another rank lunatic by his side in Bolton, instead of someone like HR McMaster to curb his worst instincts, means we are all on the muclear countdown  clock. This because many actually believe if an indictment does come from Mueller Trump will punch in the nuclear codes. And with "Ripper" Bolton there to urge him on, there will be no second chances.  Hyperbolic? No, not from a character who believes firmly he is more important than the entire world and all 7.5 billion on it.  Can you say "malignant narcissist"?