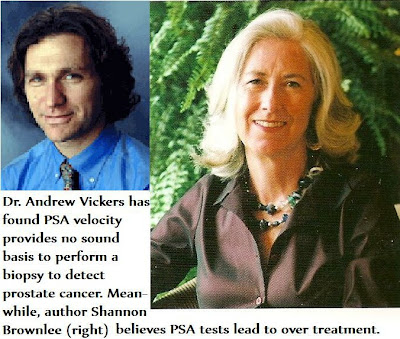 Cancer is a scourge in this country, as I have noted in previous blogs. Though certain organizations want Americans to believe it's all on them - maybe 90% in terms of diet and other habits, the fact is virtually every form of cancer (breast, prostate, pancreas, liver, bladder etc.) is increasing because of the toxins in our environment. See also,

Two particular cancers are especially prevalent: breast and prostate, with the latter killing nearly 12,000 men a year. Not stated, however, is the untold suffering experienced in the form of nearly 1 million unnecessary treatments, including biopsies, undergone each year by men whose physicians are hostage to the numbers....as in the PSA test. (For Prostate specific antigen).

These biopsies, especially, are not for the faint-hearted and the complications can be severe, with the ultimate being serious complications that require prolonged catheterization, being bed-ridden and extended hospitalization which can put the patient at risk for life-threatening hospital-borne infections such as c. diff. (clostridium difficile). Tens of thousands find even after the biopsies they're forced to wear diapers permanently because of the damage done via insertion of 12-15 pronged needles at once into the prostate (usually done through the rectum- but sometimes through the urethra or perineum) to extract sample tissue for analysis.

In the most mild after -effects, pain may last for weeks and males are warned by urologists against ejaculating - which may increase internal bleeding from the recently assaulted gland. As it is most are terrified because of the bloody semen that results when they do. This bloodiness can go on for weeks and makes even the most sympathetic spouse think twice about having sex, even if she wanted to. Condoms can help, but even the briefest sex ends up with the condom filled with blood. This is not exactly a turn-on, least of all for the guy!

Most of this is not passed on to the hapless male confronted with the prospect of a biopsy after his PSA numbers somehow go up. He's left to ponder his options and- what is worse - deciding whether to get this horrific procedure done (which is supposedly to his benefit), or betting the increased PSA (mainly now "PSA velocity" or the rate of increase in a specific time - say 1 year) is somehow anomalous and not cancer.

Medical author Shannon Brownlee, in her book 'Untreated: Why Too Much Medicine is Making Us Sicker and Poorer' (2007, p. 202) observes:

"The evidence suggests that PSA testing is not saving any lives, and even it is the large numbers of men who are treated unnecessarily are paying a terrible price. They're the equivalent of civilian casualties in our war on cancer.".

From reading many of the personal blogs of those who've endured this treatment, leading up to possible prostatectomy, this is not overstatement. Further, when Brownlee notes the PSA is "not saving any lives" she is referring to the actual numbers who benefit from the tests, or biopsies, relative to those that have them and receive zero benefit. The "saving rate" is actually maybe one guy for every 1,200 biopsies performed. The cost to benefit ratio is ....well, you figure it out!

Now, a recent contribution to the research promises to lend a more rational overtone and make it possible to at least reduce the numbers subjected to unneeded treatments and suffering up to and including resulting from major surgery and/or radiotherapy (the standard treatment in the latter case is called 'Brachytherapy' - in which dozens of tiny radioactive 'seeds' are inserted into the prostate gland and kept there over a specific time, to deliver a specific dose. I don't really think I need to elaborate on the side effects).

The research comes from Dr. Andrew Vickers of Memorial Sloan-Kettering Cancer Center in New York City, and was published originally in The Journal of the National Cancer Institute, February 24, 2011. Dr. Vickers and his co-author Hans Lilja, concluded that PSA velocity as a guideline would be unlikely to improve patient outcomes, adding, "we therefore recommend that organizations issuing policy statements related to PSA and prostate cancer detection remove references to PSA velocity."

Thus, this research is welcome information for those who may face a decision on whether to undergo prostate biopsy or not. Vickers and Lilja's point in their paper is that PSA velocity is not a good predictor of prostate cancer and, in the absence of other indications, such as a positive digital rectal exam or a high PSA level, there is no evidence to support prostate biopsy in men with a high PSA velocity. This is particularly so if the starting number isn't high already.
In his interview with the online journal Medscape, Vickers notes:

"What we've shown is that changes in PSA are not very important at all. The take-home message here is that if the patient doesn't have a high PSA to begin with and has a normal clinical exam, there is no reason to do a biopsy, even if the PSA is increasing."

In his interview, Dr. Vickers also pointed out that one of the problems with PSA velocity measurements is that velocity can be calculated a number of ways. According to him:

"There is no standardized method, and new ways of calculating it are continually being invented,"

Dr. Vickers added that a sudden rise in PSA is also not usually indicative of cancer, and "may be the result of an infection or other benign disease. It doesn't necessarily warrant a biopsy."

Now, why am I so invested? Because it's actually personal for me, having just received the results of a PSA test showing my number has nearly doubled in the past year. Have I hit the "chicken switch" and run to the urologist as originally recommended? NO. I asked for the test to be re-done and will take it again in about three months. Since the starting PSA level wasn't high as per Dr. Vickers' point, I am not going to panic irrespective of how the American Urological Association sees it (In the same article, other groups, such as the European Urological Association and the US Preventive Services Task Force, do not recommend population-based screening because of insufficient data on its benefits and harms.)

What we do know - based on recent cost assessments - is that nearly 30% of the $2 trillion odd costs in medical treatments are unnecessary. Nearly $4b a year is believed to accrue from unnecessary prostate PSA tests, biopsies and other treatments - later found to of benign causes or non-life threatening. (Two weeks ago, indeed, an article in the WSJ discussed how the AUA and its members have added incentives to ask for more tests, as "monetary incentives". Duh!)

As for me, I will bide my time. If the next test shows a further spike as opposed to levelling off or decrease, then I'll likely see the urologist. But even in that case will not likely schedule any biopsy unless the level is at 8.0 ng/ml or more. We will see.
Posted by Copernicus at 10:19 AM