"Straw man" attack from Obama? It's the HARD CORE TRUTH! 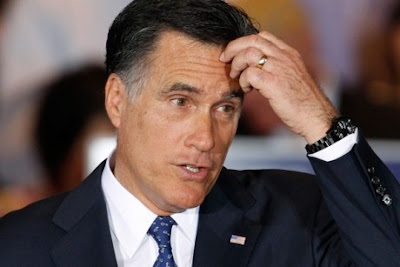 
Mitt Romney has to be the most pathetic jackass to ever run for the presidency. He seems to believe he can just brush off valid criticisms by using phrases like "straw men" to describe President Obama's recent fiery descriptions of what Romney will do to this nation as President. This isn't bull pockey or malarkey, as I already documented in a previous blog:

ALL of the cited moves intended by Mitt, including eliminating ALL regulations that favor organized labor, and all other regs that protect food, water supply etc., block-granting Medicaid and privatizing Medicare, Social Security, were not dreamed up by me (or Obama!) but documented in The Economist issue of Jan. 14, 2012, p. 25. Is Mitt also going to accuse this venerable journal of sowing "straw men" or deflecting issues? I would advise him to think several times about that, and note that his credibility is on the line here....but then we also know the guy lies congenitally, i.e.

Nor is the Ryan Budget plan any kind of balm for the economy! I noted this also in a blog:

Observing it would "destroy the country" or what's left of it after Bush Jr. damned near wrecked it for 8 years with his occupations of choice, and unpaid for tax cuts to the richest.

Note once more that any plan or "budget" which allocates $10 trillion in tax cuts right off the bat and then seeks to pay for them with draconian cuts to all forms of social insurances, benefits can only be described as "social Darwinist" which was the term Obama used!

According to author Richard Hofstadter in his must -read monograph, Social Darwinism in American Thought' (American Historical Association, 1955), Social Darwinism was originally confected by the Brit Herbert Spencer and arrived at our shores in the course of a speaking tour he gave in the last part of the 19th century. (Chapter Two, 'The Vogue of Spencer').

Basically, Spencer hijacked Darwinian evolutionary theory and misapplied it to the social sphere. (Which Darwin himself never intended!) His basic tenet (p. 40) was that the "human character had to be adapted to the conditions of life."

In this sense, no human was to receive any extraneous or state aid in what he called "the survival of the fittest" (which was a term HE coined, not Darwin).

Moreover, he was unsympathetic, since(p. 41):

"He who loses his life because of his stupidity, vice or idleness is in the same class as those with weak viscera or malformed limbs. Under nature's laws all are put on trial.

It was for this reason, predicating human survival on biological-financial fitness, that Spencer despised "poor laws". According to Hofstadter ibid.):

"His categorical repudiation of state interference with the 'natural', unimpeded growth of society led him to oppose all state aid to the poor. 'They were unfit and should be eliminated'."

Examining Romney's proposed executive orders (again, from The Economist) and Ryan's budget plans, one can see an exact and disturbing conformance with Spencer's vision of Social Darwinian elimination of the less well off and vulnerable. Because make no mistake, with the level of cuts they propose - in order to support the wealthiest- very few even of the middle class will survive.

Is THIS the sort of nation we or any real American wants? One would hope not! And while the Wall Street Journal mocks Obama in its editorials ('Paul Ryan's Hunger Games', April 4, p. A14), the truth is that seniors - given a measly Ryan voucher to buy their own health insurance, will literally be thrust into a survival of the fittest game for their own lives that even Herbert Spencer would relish!
Posted by Copernicus at 11:24 AM