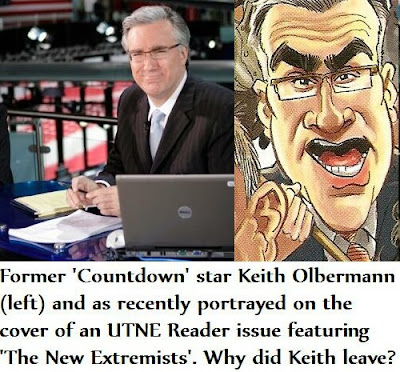 It appears that the half-life of a powerful liberal spokesperson decreases ever more as time goes on. Only ten days ago Mike Littwin, longtime liberal columnist for The Denver Post, was unceremoniously given the heave-ho, and has since been replaced by canned syndicated columns (which are much less expensive than having to pay a real time columnist staffer). Littwin, before the Post, was an outspoken liberal voice for The Baltimore Sun, and it was in Baltimore I first became aware of him and began reading his well-thought out columns.

Not long after Littwin arrived in Denver and became a part of the op-ed staff at The Rocky Mountain News (one of the few left voices on that paper) wifey and I arrived in Colorado after a move from Columbia, MD. This was in 2000. By 2009, the "Rocky" went under and all its columnists, staffers were out of jobs with the exception of Right winger Vince Carroll, and Littwin. Now Littwin is gone, and Carroll remains.....bloviating about the usual right wing codswallop like his syndicated mates (e.g. Walter Willliams, David Harsanyi, Thomas Sowell, George Will, Michelle Malkin, etc.)

Now, merely days ago...we learn the powerful voice of Keith Olbermann has been stilled, on Current-TV. 'Countdown' followers became suspicious and began to embrace assorted conspiracy explanations, after Keith's cartoon visage (see right side of graphic), wielding a large pitchfork, appeared on a cover of UTNE Reader some months ago. He had been lumped in with the likes of Gaddafi, Bill O'Reilly, Pope Rat and others as part of the magazine's 'New Extremists' article.

Countdown followers surmised this "extremist" portrayal perhaps convinced Al Gore, Current- TV's owner honcho, but some of us distrusted that Gore could be that lily-livered, never mind he didn't fight with all his might to get all the Florida votes counted back in 2000, when he faced off vs. Bush Jr. for the Presidency. (The Supreme Court stopped the Florida recount, handing the electorial college victory to Bush, though Gore won the popular vote by over 500,000. Later tabulations run by a consortium of newspapers showed Gore actually would have won had he demanded all votes counted in all counties as opposed to a select few.)

I didn't buy the take that Gore would just dump Olbermann because of speaking out too much and too often. My worry was that a small station like Current, reaching barely 50,000 viewers, was simply a poor match for a high-powered perfectionist accustomed to working at a major cable network equipped with the whole spectrum of up-to-date amenities. As it happened, this turned out to be much of what was the case, as Howard Kurtz has recently noted:

Among the production level problems documented by Kurtz:

- On February 10, the studio lighting failed while Keith was on the air

- On other occasions, toner cartridges ran dry on machines used to make copies . For another show, incorrect settings were provided for DVR machines making it impossible for viewers to record it.

These together left the impression on Olbermann and Price that Current was more a "rinky dink" operation and more apropos to "cable access" TV than Cable. But any ordinary viewer could have told them that and they might have learned it simply by having followed Current-TV before signing on.

Of course, the 'two sides to every story' shtick remains in place and Kurtz in his report doesn't disappoint, so we also learn of ego clashes such an involving Keith's service car, the actual nights he was to have worked (and which nights he didn't have to) as well as Keith refusing to talk head to head to Current execs other than through a third party.

In the end, all of these recede into insignificance beside the reality that a powerful, much needed voice is once again gone from the airwaves. Maybe it was largely Keith's fault and his inability to adapt and adjust to a "Mickey Mouse" level station operation, or maybe it was Gore and Current -TV's for not doing more to accommodate this powerful (but prickly) personality.

In either case, the viewer and what's left of the liberal left are the real losers. We wish Keith well in any case, as we do Mike Littwin!
Posted by Copernicus at 1:02 PM