The Ann Romney Kerfuffle: Much Ado About Nothing 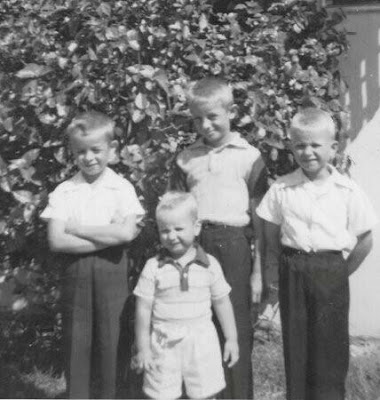 My mom had to handle this lot (plus a younger sister) AND work outside the home teaching 8 classes of 35-38 kids each day. Could Mrs. Romney handle that? Doubtful!

All right, here we go again, trying to clear up the clutter of a corporate media which is more committed to noise than signal. I am referring, of course, to the eruption that ensued after a Dem activist, Hilary Rosen, went on the air, opened her mouth ....and promptly inserted her foot.....Thereby enabling the disreputable Reeps to make an issue out of "dissing Moms" that we don't need.

Now, despite themselves and their real war on women across the nation, the Repukes have managed to snatch a temporary victory from the jaws of defeat and forced Dems like Obama, wife Michelle, and various advisors including David Axelrod, as well as VP Biden to go on the air dissing Rosen's blurt.

But you know the funny thing about all this kerfuffle? Hilary Rosen was basically spot on correct, she just chose the exact wrong words to express it!

NEVER EVER say that a mom, especially with kids to tend to, never worked a day in her life!!

Never! The correct phraseology, if you are going to refer to a privileged Overclass mom and member of the 1%, is that she "never worked outside the home a day in her life".

This makes the critical distinction needed, and doesn't diminish or disparage mom-hood as being work in its own right. At the same time it acknowledges a critical difference in levels of responsibility, demands between a mom who has basically everything she needs to take care of her brood (including vast wealth) and doesn't have to worry about even having to work outside at a 8-5 job, far less having to worry over expensive day care if she does.

The latter mom must go off to her own shift then come back and take care of the brood, meanwhile trying every which way to pinch pennies to make ends meet.

As my mom had to do (see four of the brood she had to take care) while also having to teach 8 classes a day at Immaculate Conception School in Hialeah, FL in the 1950s- 60s during a 3 -plus year period my dad found little or no work after recovering from a sudden relapse of his malaria (picked up during WWII fighting in the New Guinea jungles).

So no, there's no damned comparison with the volume and intensity of the work load mom had to do compared to Mrs. Romney. The reason? Mom had to work outside the home, teaching classes of 35-38 each (including marking papers which I'd help her with each night, from the age of 10) AND come back and cook dinner for FIVE kids (my sister isn't included in the photo) as well as tend to the kids aches, pains, grievances....and other chores.

Meanwhile, we have the overclass Mrs. Romney, the beneficiary of all her hubbie's dedicated expropriation of others' labor, whose privileged life experience in no way dovetails with my mom's. Mrs. Romney, I will wager, has never had to worry about the cost of ground beef, or milk, or veggies, while trying to feed her brood during down times...or when hubby was unemployed after a recurrence of malaria. Nor has she had to fret over the cost of a gallon of gas to fill up the tank, or the cost of medical care if any one or all of her brood got sick.

Mrs. Romney, no matter what the Repugs might say, therefore lives a charmed and entitled life compare to the millions of moms who not only have to see to the home front, but also work outside that front to bring in bacon enough for all her kids to have enough food to eat, and clothes to wear.

Hilary Rosen, let's be clear, erred in the way she presented the 1% Mrs. Romney in a live broadcast, not in how millions of other American working mothers are at a comparative disadvantage vis-a-vis the privileged Mrs. Romney. Since those other (outside working) moms don't have the benefit of a scion of privileged wealth to cushion the slings and arrows of outrageous fortune!
Posted by Copernicus at 3:12 PM