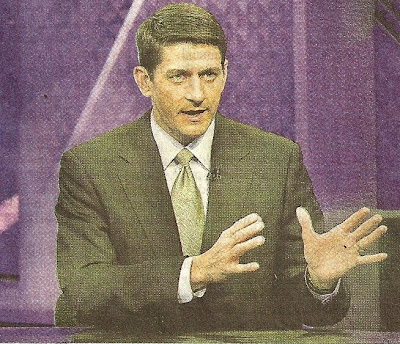 Jeebus! The Right's blowhards, seeing how their favored economic henchmen (Romney and Paul Ryan) will be correctly portrayed by Obama as Social Darwinists, are desperately attempting to remake their images.....especially that of Paul Ryan. Exhibit A: Daniel Henninger, long time WSJ troglydite in his 'Wonderland' column today (p. A15), 'Demolishing Paul Ryan' .

Henninger warns his readers that "within the hour of the Ryan CBN interview, the blogospheric left went ballistic."

Henninger then quotes and cites assorted left bloggers, who mostly miss the most critical points, which play right into Henninger's mitts. For example, one blogger complains that "Ryan is shilling for the Catholic church".

Well, not quite that simplistic, maestro!

Another blogger is quoted as opining: "Ryan has drunk the libertarian kool aid".

Actually, it's more serious than that! Libbies, while mostly well-intentioned in their aversion to an overgrown state, are basically the disciples of Ayn Rand - a Russkie transplant and atheist, who wrote a few tomes (like Atlas Shrugged, and The Fountainhead) then slowly went bananas and had to receive intense treatments for a crippling neurosis and paranoia that one only detected the seeds of in her 'Virtue Of Selfishness'. In any case, let us all agree that any group that follows the dictates of a fruitcake can't be as malignant as they seem!

So, no, Ryan isn't following any Libertarian screeds, but he has taken Herbert Spencer's social Darwinist kool aid. Recall that it was Spencer who stated, referencing the poor, indigent, crippled or those dependent on government assistance to live ('Social Darwinism in American Thought' (American Historical Association, 1955, p. 41) :

And as author Richard Hofstadter observes (ibid.), Spencer so embraced "survival of the fittest" as applied to human affairs, that he believed the 'natural' (economic) growth of a society was impeded if those who were dregs and millstones weren't cut free. Hence this outlook led him to oppose all state aid to the poor. In his view: 'They were unfit and should be eliminated'."

Crippled kids and oldsters needing food, meds, therapy or assistance? Toss 'em off cliffs! Kids with cancers or other diseases (e.g. MS) that costs millions a year to treat? Ice 'em! Oldsters with severe health problems that present a constant drain to economic resources? Give 'em a cup of hemlock, or better yet, cyanide! Ordinary workers who simply became ill on the job from inhaling carcinogens and other toxins, or were seriously injured? Throw 'em onto the nearest train tracks and let God sort 'em out!

In other words, Spencer saw none of these people as complete - hence they didn't deserve to live because they could not survive on their own. It did not matter to Spencer that a government might have the capacity to provide health care, therapy or other assistance via the tax commons - and this might go a long way to making these folks complete. In his mind, that didn't count because in order to achieve it the resources of the healthy and fit had to be taxed, drawn down.

If this was done, then his ideational "fit" society would become crippled and overburdened by the "malformed", "indigent", "lazy" or unintelligent. Such a society would not be able to compete with fitter ones, and thus its people would become unfit, weaker over time. Better then, to weed out the unfit and let them all perish by denying them ANY state assistance....which was artificial nurturance.

It is exactly this template that Paul Ryan seeks to follow and implement via his budget. However, he well knows (as do his admirers) that to present it in blunt form would be to invite the most violent revolution this nation has ever seen. Hence, the reason Ryan has made recent efforts to "gussie" it up using the veneer of his own Catholic religion (if you can believe it).

First, we are informed (Henninger, op. cit.) via an actual Ryan quote what his "real" intention is:

"A person's faith is central to how they conduct themselves in public and in private. So to me, using my Catholic faith - we call it the social magisterium - which is how you apply the doctrine of your teaching into your everyday life as a person."

Ryan then conflates this "social magisterium" with what he calls the "principle of subsidiarity"- whereby he uses a lot of fancy language- but in the end, his principle comes down to replacing the actions of governmen by charity, and person-to -person assistance.

In other words his "principle" can best be summed up as: "That government governs best that governs least and we ought to have charity as the best source of assistance to our poor, disabled, ill..."

The whole idea, in his words is "not having government crowd out civic society but by having enough space in our communities that we interact with each other and take care of people who are down and out in our communities"

A nice sentiment, for sure, but this is not 18th century rural America where we all inhabit confined villages or farms like on 'Little House on the Prairie'. Nor are the needs that arise today (such as millions of autistic kids) ones for which person to person care -interaction or even simple charity handouts can ameliorate. No. What they require is massive government input and expenditure!

At least as much as it's pissing away on useless occupations or so-called "wars".

This is what neither Spencer or Ryan get. But Spencer, like Ryan, made the appeal to charity as an option to government handouts. Hofstadter again (ibid.):

"Accused of brutality in his application of biological principles to social principles, Spencer was compelled to insist over and over again that he was not opposed to voluntary charity to the unfit since it had an elevating effect on the character of the donors."

So, that is very magnanimous of him.... like of Ryan, to suggest we "voluntarily" care for each other. But....what if another depression or recession arrives? What do you suppose will happen to that giving if so many people are already in immense need? The answer is that the charity will drop off, food bank cupboards will be bare, and there'll be no one to stand in!

Oh, and how do we help care for millions of autistic kids? Especially when expert therapy is required which demands lots of moola!

Lastly, in his column, Henninger treats us to the encylical "Rerum Novarum" from Pope Leo XIII. He quotes that pope as writing:

"The State must not absorb the individual or the family"

But ...NO one said it should! And let's be clear that absorption is far different to providing the necessary means for the most vulnerable, dispossesed, and sickly or disabled citizens to live. In fact, the actual "social Magisterium" that I was taught (as part of my Jesuit education at Loyola) was that the State is the last bastion for support of a people when charity isn't adequate. In this sense and from this spirit, the social justice elements of the Catholic faith emerged....but which over the decades seem to have diminished.

Maybe Paul Ryan needs to re-read those old tracts, as opposed to being so engrossed in Herbert Spencer's theories!
Posted by Copernicus at 1:46 PM