So Is the "Bully Epidemic" in the USA Really a Myth? 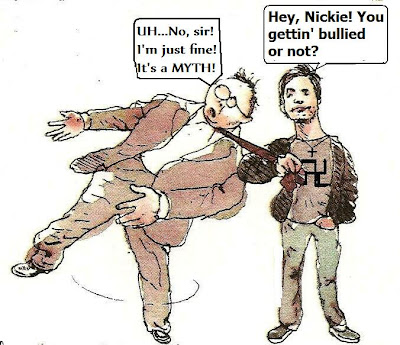 The currently showing documentary film "Bully", with its young star Aaron Cheese, is certain to gain momentum as it draws necessary attention to what statistics appear to show (the film says "over 13 million American kids bullied this year") is an epidemic in this country. The production of the film itself followed a number of high profile cases (e.g. Phoebe Prince) who were evidently bullied by peers to take their own lives. This bullying often manifested not just in the hallways of schools, but also on social media sites such as Facebook, and Twitter.

The same film "Bully" estimates anywhere from 20%- 70% of students are bullied in a given year. This is an astounding proportion (even the lower one) and it is inevitable that some might find the figures "overblown" or "exaggerated". Such a person is Nick Gillespie who recently wrote a piece "The Panic Over Bullies" (WSJ, March 31- April 1, p. C1 and C2) in which he insists the real panic or epidemic is not over actual bullying but the panicked perceptions of assorted "helicopter parents" unable to feel secure if their charges are out of their sight for five minutes. Hence, it is the parents' overblown, unjustified, neurotic anxiety which transmogrifies normal situations into "bullying".

According to Gillespie (p. C1):

"I have no interest in defending the bullies who dominate sandboxes, extort lunch money and use Twitter to taunt classmates...but there is NO growing crisis! Childhood and adolescence in America have never been less brutal.

Even as the country's overprotective parents whip themselves into a moral panic about kid-on-kid cruelty the numbers don't point to any explosion of abuse."

What are these "numbers"? And let us be aware as with most critical indicators in this nation, from the unemployment rate, to the inflation rate, to debt as percentage of GDP to the poverty rate, nearly every statistic is gamed for political benefit or PR-spin. Thus, unemployment rate, poverty rate and inflation rate are always lowballed from their real rates, even as the debt as % of GDP is overly inflated (usually by Repuke thinktanks).

Anyway, the numbers Gillespie relies on to make his case that the numbers of the bullied are actually falling, are culled from the National Center for Educational Statistics (NCES). He notes (p. C2)):

"According to the National Center for Educational Statistics, between 1995 and 2009 the percentage of students who reported "being afraid of attack or harm in school" declined from 12% to 4%. Over the same period, the victimization rate per 1,000 students declined fivefold."

This entices the question of how there could be such a vast gap between statistics and perceived reality? Is it the case that the incidents of bullying, though fewer, are more vicious and horrendous? And that this more vicious slant contributes to the perception that there's a higher frequency?

Or, could it be the statistics themselves somehow don't capture the true extent of bullying? At the heart of this is exactly how the statistics are assembled, quantified. This is usually based on whether a limited "random sample" was taken by the NCES, or whether all students from as many schools as possible gave inputs. If only random samples were used, then there is the high probability of bias error, or selective filtering. In such cases, say by taking a sample of 150 students out of 2,500 at a high school, the low numbers mean higher probability of false negatives.

Let's say 150 sample forms are distributed at High School X with an enrollment of 2,500, and the selected students are asked to convey them back to the teachers after a day. It is common knowledge that with such a small sample nearly every kid will know by the end of the day who received the forms and hence who is giving input (even if the forms allegedly ask for anonymity). At the same time, the popular kids that got them will quickly be able to parse their own numbers and deduce who the kids most likely to give "victimized" responses are. The latter also know this, and aware they may add to their bully burden, they opt to punt and give "not afraid" responses in much higher frequency than if there was more control or if ALL the kids at HS X received the forms.

This is often why such stats are not worth the paper they're printed on and why the NCES studies, though possibly well-meaning, may not convey the full extent of bullying or victimization.

Never mind, to Gillespie, the NCES stats holds weight, as well as The Foundation for Individual Rights in Education' claim that anti-bully laws (like New Jersey's Lautenberg-Holt proposal) threaten "free speech rights of students" because "its definition of harassment is vague, subjective and at odds with Supreme Court precedent."

Thus, it is not much of a surprise when Nick bloviates:

"Now that schools are peanut-free, latex-free, and soda-free, parents, administrators and teachers have got to worry about something. Since most kids now have access to cable TV, the internet, unlimited talk and texting...it seems the adults have responded by becoming ever more protective and thin-skinned."

Really, it's that simple? While I myself do have problems with many American parents being overly protective (I've blogged before about parents turning little Johnny or Jane loose on their college careers - then texting them or phoning them every second) I don't think that necessarily applies in the case where a kid is being slugged repeatedly in the back or the head, called every permutation of f-words, and spat upon. And.....has to endure that treatment every day.

But to Nick it's no biggie. Even the torment experienced by Aaron Cheese in the movie "Bully" isn't apparently a result of bullying per se, but Aaron's willingness to accept being the victim. As Gillespie puts it:

"Our problem isn't a world where bullies are allowed to run rampant, it's a world where kids like Aaron are convinced they are powerless victims."

Maybe. But maybe it's also a case that the most severely bullied kids like Aaron know when the odds are stacked against them, and when any overt move toward "self defense" might well be their last.
Posted by Copernicus at 9:42 AM