Please Tell Me That Seniors Can't Be THIS Dumb! 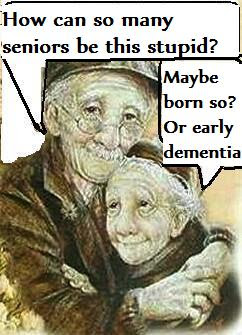 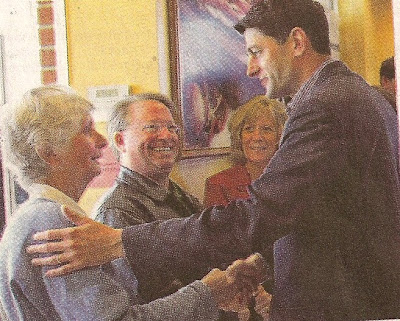 WHY are these seniors fawning over Paul Ryan when his budget - if passed in a Romney adminstration- will send most to the proverbial poorhouse? (Or at least dumpster diving).

Okay, let me clarify that: By seniors I mean those over 59 and to about age 70, who assorted stats disclose are leaning ever more heavily GOP. Are you effing kidding me? What's in their brains, or is it early dementia? On the other hand, the older - much older- Depression era seniors like my 90-year old mom get it. They came up under the Great Depression, saw the breadlines first hand and know what a difference FDR meant.....which was why so many of them broke down like babies and cried when he died.

These seniors lean heavily Democratic by almost 2:1 and with good reason! They've been under no illusions, thanks to their Depression-era experience, that individuals can do everything for themselves. They know, at critical junctures, government must step in to assist the most pummeled and vulnerable....not simply toss them to the wolves or yelp to "pick yourself up by your own shoe strings!" Yeah.....what if they have no shoes, far less 'strings'!

But when large subsets emerge that have never fallen on hard times, especially individuals, it is too easy to become smug and complacent. Their motto is "Hey, I got MINE (e.g. health care) adding.... 'Fuck you, and get your own! Don't ask me to spend my tax dollars on YOU!'

The hard thing is that more seniors in the above -named age group, including baby boomers, appear to be falling into this trap. Why, I have no idea! According to an analysis by the Pew Research Center for the People and the Press, it concluded that the "over 65 set is now more conservative on social issues, angrier about the direction of the country and uneasy about the growth of diversity in the U.S." - say compared to the younger demographic. (WSJ, April 9, p. A4)

What these conclusions also telegraph to me is that most of the respondents are likely white and entitled, and safely ensconced in their gated villages or communities and.....like the infamous George Zimmerman - plausibly cowering every time a kid of color walks by ....if they see any at all. I mean "uneasy about the growth of diversity"? You have to be kidding!

What's mystifying in the latter case, is that by favoring McCain (72 at the time) these seniors also would have favored his running mate - a know-nothing airhead from Wasilla, AK who couldn't even name one newspaper she read regularly in an interview with Katie Couric, and who believed Vladimir Putin sometimes "intruded over Alaskan airspace"! And this was the person they wanted merely three heartbeats from the 'football' with the missile codes?

What is it these seniors don't get?

Moreover, why (as in the photo shown) are they cozying up to a guy like Paul Ryan, whose budget will effectively toss all of them - especially the younger ones - into a kind of senior "hunger games".

Do these smiling fools think that if they're given a "voucher" for $5,000 or $10,000 they will be able to buy their health insurance on their own? I have news for them: they're dreaming! I saw that when, as a healthy 62-year old, I attempted to buy my own and was told that the only insurance available was a high-deductible plan for $15,000 /yr. Oh, and you had to cough up the first $5,000.

In the case of Medicare vouchers, the so-called "premium support" can be totally exhausted merely by premium payments (currently $100/month for standard Medicare, but more than $180/mo. for private plans). Add in a needed operation, say for a hip replacement surgery (after a fall) and the senior has not only exhausted his or her voucher, but ends up in debt (on account of having to likely use a credit card or loan to cover the cost of the operation since Ryan's meager voucher won't. Meanwhile, standard Medicare covers 80% of an operation's cost).

If seniors want a Romney-Ryan ticket, are they also prepared to have their Social Security privatized? Will they be deliriously happy living off of peanuts if the privatized version of Social security experiences losses in either equities, or bond funds? (Often loaded with "toxic assets" as observed by the author of 'License to Steal'.)

Bear in mind that Romney, given he's planning to bring on tax cut specialist Glenn Hubbard (doyen of the Bush Tax cuts that increased our deficits by nearly 30% over 10 yrs.) will likely also go with Bush's Social Security Privatization plan, patterned after the Chilean pension privatization scheme of CATO Institute's Jose Pinera. That scheme was implemented because it was realized the Chilean gov't had inadequate monies to pay out safe, secure pensions so had no choice but to tie them to the phantom money of the Chilean stock market. Pinera also tried to foist the plan on New Zealand, but that nation - after running the numbers and seeing how it would impoverish their elderly -said an emphatic 'No!'.

At root, the plan allows only a minimal monthly payout if any investments lose beyond a threshold level, of about 3%. Below that, and the recipient (likely the millions of seniors that are agog at voting in Romney because they are "reassured by his reputation for pragmatic competence" (ibid.) will get only about $400 a month. This was decided as the "baseline" level allowed under the Bush-CATO Pinera scheme.

Now, how many seniors really believe they can live on a $400 pittance, while also receiving only about $10,000 /yr. (if lucky) to pay for all their medical costs? If they believe they can, or have enough extra money to cover costs, then they shouldn't be out and about at political events but strapped into a firm seat in an appropriate institution with thorazine as their main supplement .

Are they even grounded remotely in reality that they'd so carelessly toss their future and that of millions of others to the four winds? Evidently for too many older Americans, added age doesn't necessarily mean more wisdom!
Posted by Copernicus at 12:53 PM

Labels: premium support, Research Center for the People and the Press, Ryan plan