Conservative ideologues are still trying to spin JFK's tax policies in their favor but they have a slight problem: REALITY! 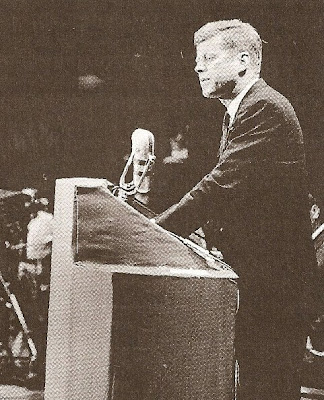 Amity Shlaes, former Financial Times columnist, was noted for her misrepresentation of liberal icons such as FDR, especially his New Deal and Social Security law. After about three articles replete with disinformation, I wrote the FT editor and opined that such a person did not redound to the benefit of such an otherwise reputable and sterling journal. Within 3 weeks Ms. Shlaes was gone, off to blab her disinfo on the Wall Street Journal's op-ed page.

She's now re-appeared once more - today - in a piece entitled 'Tax Policy is About Competition, Not Fairness'. Shlaes would have us believe that JFK, along with Walter Heller (Chairman of his Council of Economic Advisors) drafted a tax policy (later known as the "Kennedy- Johnson tax cuts") that didn't factor in fairness only "competition". She writes (p. A17):

"In the 1963 State of the Union address, Kennedy spoke about obstacles that 'undercut our efforts to compete with other nations'. He called 'one step above all essential' to solve the problem: 'the enactment this year of a subsantial reduction and revision in federal income taxes."

But once again, she mixes issues in order to promote an agenda (of competition over fairness). In the case of 1963, and JFK's SOTU, author Donald Gibson ('Battling Wall Street: The Kennedy Presidency', Sheridan Square Books, 1994) notes (p. 51) that by 1963:

He proposed increased economic cooperation among nations to achieve economic development, and he attempted to re-organize both foreign aid and lending programs to facilitate development. He was not only tolerant of, but actively supportive of government economic planning within and among nations, stopping short of total state control that was associated in many communist nations with totalitarianism".

And...just HOW did the Rightist financial press of the time regard JFK's "competitive" tax moves? We need to know this to call bullshit on Ms. Shlaes. Again, Gibson, p. 58:

" Later in 1963, Fortune encouraged Congress to prevent Kennedy from using tax and budget policy as 'instruments in managing the economy' and criticized Kennedy and his advisors - Kermit Gordon and Walter Heller - fore using budget deficits to promote growth rather than for the much more limited purpose of countering recession".

As Gibson goes on to note(ibid.):

"It's hard to imagine a more emphatic repudiation of a president, at least within limits normally observed by major media entities."

Indeed, a consistent attack on JFK's tax policies, as they issued not only from Fortune but also 'Business Tides" in Newsweek, and The Wall Street Journal, was that they embraced the concept of dirigisme. According to Gibson (p. 59):

"that is, a type of economic nationalism which included economic planning to achieve rapid growth."

Later, we see how the U.S. business press almost uniformly condemned JFK (p. 62) for his international loan policy, especially in regard to the low interest loans embodied in his "alliance for Progress".

What we see, contrary to Amity Shlaes' blather, is a president willing to go the extra mile for international cooperation, NOT competition - and taking heat across the board from the reactionary financial press for it. Case in point: Henry Hazlitt in his 'Business Tides', taking JFK to task for his tax policies - including the proposed tax on U.S. business earnings abroad.

How does Shlaes square this with her revisionist swill? Point is, she can't! But since most of her readers won't bother to check the record, she can get away with it! That record includes past issues of Fortune, and the WSJ such as:

The sad fact is that conservo ideologues like Shlaes can get away with their revisionism because too few of our countrymen know the facts of our economic and political history enough to challenge these miscreants....or to do the necessary digging in informed sources to be able to see through the rubbish.
Posted by Copernicus at 11:08 AM