Let's Not Confuse the 3 Amigos with a Guy Like Mitt Romney! 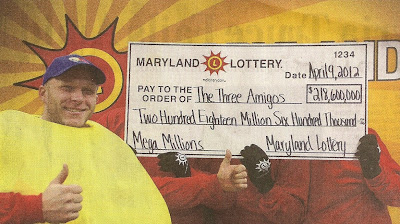 Kudos and salutations to the "Three Amigos" - a trio of Maryland educators who just won a one-third share of the Mega lottery, for takings of $218 million. As the Director of the Maryland State Lottery noted, it's exactly people like these, of humble means, that one likes to see with such major winnings. In this case the "amigos" (a 20-something and 50-something female teacher, and 40 -something male administrator - none opted to be identified yet, a good thing) deserve our congrats and praise. Evidently, from the news stories circulating (such as on last night's ABC News) all had money problems of different degrees.

This win now solves them as each will likely end up with at least $35 m if taking a lump sum and after taxes.

This is not a lot of money compared to the billionaire tycoons in our society, or those like Reep candidate Romney who have made so many hundreds of millions via the expropriation of others' labor, they opt not to make their total earnings a matter of public knowledge. This is, of course, their choice but it brings a cloud of suspicion on their heads as to the origins of that wealth.

Recall from Karl Marx' work Kapital, his theory of expropriation by which all those who labored in whatever form were made poorer and expendable at the hands of owners and their capital. If the labor value sold as a product was L, and V is the labor value embodied in the production of the item, then the surplus value S is:

For arch-capitalists like Romney in his various past companies, therefore, the lower V the value of actual paid wages for his workers, the higher S - the unpaid labor, and the more wealth expropriated. Meanwhile, the rate of surplus value, or the rate of exploitation is:

So if V, the paid labor wage is low enough, the capitalist parasite can make unseemly wealth off his workers at every turn. By the time he then sells his company - and ditches his workers (including via mergers or straight sell-offs) he can approach billionaire status.

This is NOT the same as a humble school teacher pinching her pennies for groceries, and possibly a home mortgage too, who suddenly comes into sudden wealth via a fortuitous numbers pick on a lotto!

Yet, the Rightists - always eager to confuse and conflate- have no problem spieling about how the two classes are the same and therefore, HEY! - 'What's A Fair Tax Rate for Mega Millionaires?' (WSJ, April 11, p. A13 by Brian J. Gaines and Douglas Rivers).

The authors correctly note that polls often show Americans favor raising taxes on millionaries or 'families earning over $250,000 a year" and so endorse the "Buffet Rule". The sly authors, however, then ask:

"And as for the polls, do they imply that Americans want the new mega-millionaires to pay more than 35% to the Feds?

It turns out that most Americans do not think that 35% or anything close to it is a fair tax rate, even for bizarre windfalls such as winning a lottery."

But what these two clowns don't grasp, is precisely what the polled Americans do! That instantly won money, as in a chance lotto, is NOT in the same category as massive wealth accumulated by rich tycoons via slow, grinding expropriation of others' labor. Hence, Americans' suggestion of a "10% tax or less" is well within the bounds of this thinking. These Americans have an inkling of what they sense is fair and that the mega-millions winners are different - but they may not be able to articulate it like the WSJ authors.

Indeed, the WSJ piece authors' efforts to try to portray the Americans polled as inconsisent or confused actually comes back to bite them on the ass.

The truth is that nearly every other nation recognizes lotto winnings to be in a special class from acquired wealth - in the sense we don't know exactly the origins of the latter. (But again, given the capitalist purview, expropriation in some form is a good bet).

In this sense, in most other countries, the sudden winnings accruing from a lotto are NOT taxed, period. The U.S. in that sense stands almost alone as a taxing nation, not only for lottos but other winnings such as for prizes awarded - the Nobel Prizes among the best known. Only we tax Nobel Prizes which is really an insult on the global scene. What we ought to be doing is taxing defense contractors and their ilk 500 times current rates and letting lotto and Nobel winners keep all their serendipitous gains.

Thus, there is no conflict of perceptions and the authors are wrong to try to create any. The multi-millions of these mega-winners is simply not in the same wealth category as somebody like a Mitt Romney or "Chainsaw" Al Dunlap who likely wrung their wealth from the hides of thousands of workers at their beck and call.

In the ideal world (or if they were in a nation other than the U.S.) the "Three Amigos" would keep all their winnings while Mitt Romney would have his earnings (including via rentier wealth accumulation) taxed at a minimal rate of 50%. And THAT would be letting him and his ilk off easy compared to the 1950s, when the top marginal rates were at 91%!
Posted by Copernicus at 10:14 AM