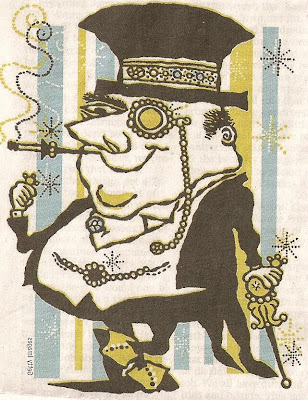 WSJ staffer Holman Jenkins can ignore propping up the fat cats, the hyper wealthy and all manner of capitalist parasites that made their money by expropriation of others' labor. After all, he works for the most reactionary journal of finance ever conceived....and on its op-ed pages! You gotta deliver the goods and please Master Rupert when he demands it!

Anyway, Holman, in his latest piece ('The Inequality Obsession', April 19), admonishes those of us who dare to be diehard socialists, as well as certain media instigators (you can count them on one hand) and the Occupy movement, that they must all get a grip, back off and finally halt the "inequality obsession". Never mind that the best indicator of all, the Gini coefficient, shows we have regressed as a nation since the Bush tax cuts took effect, and the index - at 0.48- is about the same as the Phillippines and Mexico.

Meanwhile 12 million more have ended up on food stamps, and the number in poverty has increased to 1 in 6. (A pity that if Mitt Romney is elected all these people will face an even more sordid future with the Reeps cutting food stamps to the bone, even as they reinstate even bigger tax cuts for the Richest!)

But what really makes me howl with laughter are some of the analogies little Holman uses to try to make his specious point. A case in point, he writes:

Uh......no, Holman! It should mandate that the same safety standards that are applicable to the "rich man's" vehicle are also used for the average American's. This sort of stupid analogy is like posing the unserious question: "If the ground beef a rich man eats is 10x less likely to have E. coli, brain parasites or campylobacter as the beef the average American eats will an equitable policy require that the rich man's burger also have as much E. coli, brain parasites and campylobacter as the average guy's?"

Again, the answer is no, only that the same safety standards apply! (Which means the same regulations!) Some may argue here that cars aren't like burgers, but in fact, when it comes to safety margins, they are. If you have ten times more average autos bursting into flames than those owned by the rich, it eventually becomes something of an obvious outrage - even to the corporo-media- and the auto company's sales will plummet. Thus, it makes more sense to put safety factors in to minimize bursting into flames, which engineering details would show (based on past instances of such autos) that the increased cost is negligible when compared to the benefits, and sales accruing from a safe, economy class auto.

Following the above screwed up analogy, Holman next uses similar logic to make the following statement:

"Income inequality is a strange obsession, at least to the extent obsessives focus their policy responses on trying to adjust the condition of of the top 1% rather than improving the opportunities for everyone else."

But he misses the point, which is (stated in a question): What if the opportunities for everyone else hinge on the "condition" of the top 1% ?

The latter, you see, recognizes the zero sum game that modern economics (governed by the Pareto Distribution) foists on everyone else.

As a tiny reminder of how it works:

The wealthiest 1% get on average $394,000 each and every year from tax cuts.....compared to the average blue collar bloke(currently leaning toward Romney, if you can believe it!) who gets maybe $400 back in tax cuts if lucky. Call this guy, Joe and his 1% counterpart, Reginald (see Reginald's cartoon image attached puffing on his $500 cigarillo - though this image would more fit the top 0.001 % who receive $1.4 million back a year in tax cuts).

Joe, with his $400, can maybe buy most of a month's groceries, or maybe get minor repairs done on his 1997 Dodge Truck.

Reginald, who is in the top 1%, will use maybe $100,000 of his tax cut takings to invest in commodities futures markets where he will speculate on oil futures, and make maybe another 200 grand. With this much money, he will give at least a 50 grand donation to Romney's campaign to sow even more lies about Obama and the economy. (Such as the one he pulled yesterday when he appeared at a closed factory - 4 years since closed under Bush- and blurted: "Had the president’s economic plans worked, it would be reopened by now. But it’s still empty. And it underscores the failure of this president’s policies with regards to getting this economy going again.” )

Actually, the real culprits were the Reeps in the House, who voted down Obama's $440 billion jobs plan that would have provided the capital whereby the plant could have opened. You see, rather than enable workers to have jobs and thereby keep plants open in the Rust Belt, the Reeps have more been about preventing Obama's re-election. But the cost of that has been pissing on the heads of everyone else.

But this is how Romney operates. How the elites operate, as well as their defenders and sundry shameless apologists like Holman Jenkins, Jr.

He also lies in other ways, as by claiming this marvelous market "is actually increasing the competitive advantages of the educated". Actually, last I looked, these recently educated had more than $1 trillion of college loan debt outstanding, mainly as a result of parasitical private loans (made by elitists of the 1% in assorted banks, private companies) which carry uncapped variable interest rates and which aren't required to include flexible payment options. As a result, s student taking out $50,000 in private loans, could well end up paying back more than $180,000 total by the time she's all done. That's about enough to buy a decent home in Charlotte, NC or Milwaukee, for example.

But.....most of these kids can't even get decent paying jobs because the elitist -financed banks hold more than $2.7 trillion from corporations who's rather sit on their money than create jobs.

Holman Jr. insists that "generalizing about the distribution of incomes is an academic specialty seemingly incapable of freeing itself from tendentiousness"

But in fact, not. It's very real and personal to the (once) middle class teacher in Ohio who has now been cut loose from her long time job, because of state budget cuts to education, because the Reep dominated state legislature won't raise state taxes to pay for more teachers.

And as this mom barely hangs on with the earnings of a substitute teacher, she's left to wonder how she will afford to keep the lights on in her home, far less pay the mortgage.

But to entitled, coddled twerps ensconced in the ivory towers of reactionary finance, like Holman Jenkins, Jr. , these things aren't the stuff of the real world but "academic obsessions". Maybe because they've never had to suffer, or if they did suffer, they conveniently forgot the leg up they got compliments of a lucky break or timely Samaritan. After all, very very few of us "make it" entirely on our own.

Hence, it's more than grating when financial creepozoid hacks like Jenkins, Jr. remark that "there's a certain soul sickness that's impossible to put a constuctive gloss on".

Referring, for example, to how The New York Times has catalogued the excessive consumption of the über rich, as I have, e.g.

Now, Holman perceives such "cataloguing" as a case of rank envy (hence his "soul sickness" descriptor), but in fact it is a case of information that reinforces that data we already have at hand, say from the Gini index. With such cataloguing and blogs such as I have done, one can see first hand how the wealthiest are able to live off the taxes THEY aren't paying but which the rest of us are!

Thus, we can see how we are getting screwed because these rich elites are making out like bandits, most paying less taxes than their overworked secretaries.

It was within this economically unbalanced tableaux, that a whole group of Caribbean Socialists based at the Univ. of the West Indies arrived at the concept of excess wealth in the late 1970s. Their main theme was that any capital used for "frivolous" purposes could be regarded as excess, and they generally set a criterion that in a nation such as the U.S. - anything over $10 million had to be excess wealth. Making allowances for where one lived, if one had money left over to burn ...say on $150 grand commodes, one was awash in excess wealth.

Their objective here was practical, because especially in re-building former colonial outposts and socieities, it was critical to know the economic balance sheet if one intended to forge prosperous future nations. Thus, the off-side balance sheet led many Caribbean nations to impose much higher taxes, including even on the pensions received by their own expat retirees living outside the country!

The Caribbean socialists of the 1970s, including Dr. Ralph Gonsalves, maintained that 50% ought to not be too much to part with in taxes for a hyper rich capitalist. For the top one percent in the U.S. one may argue that anything over what those Bush tax cuts provide is definitely excess wealth....and hence,...if they don't voluntarily give that money back in some way, say to homeless charities, then Uncle Sam needs to help them out.

Maybe the next time Holman Jenkins, Jr. writes about "soul sickness" to do with inequality "obsession" I can put him in touch with Ralph Gonsalves for a much needed reality check!
Posted by Copernicus at 10:53 AM